I was one of the first in line for breakfast. Although there were several other thru-hikers around, I didn’t feel close to any of them and preferred to sit alone. My waitress was very nice and brought me a complimentary shot of apple shrub, along with my coffee. I was surprised at how good it tasted! I had tasted apple cider vinegar from the store before, but this tasted so much more delicious! She brought me over a second one. Miraculously, my stomach was not hurting for the first time! I attributed it to the apple shrub and told my waitress. It was made on the site and I asked her if it was available to buy. She went to check with the chef and told me it was, for $25 a bottle. I said I couldn’t buy it now, but thought it would be very helpful to me when I got home. She said I could always come back after the hike.
I was able to do a little correspondence as I ate. I couldn’t believe that my stomach wasn’t hurting and was able to get seconds, including a Belgian waffle. I really liked this place. It was nice to have a bit of luxury right on the trail!
I headed back to my room to take another shower and begin the packing process, which always takes a good amount of time. Then, I checked out and took some pictures around the lodge. I liked the patio outside, even though I never sat out there. It had a very European feel. 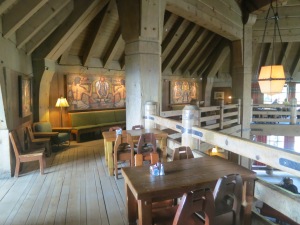 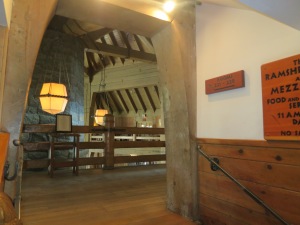 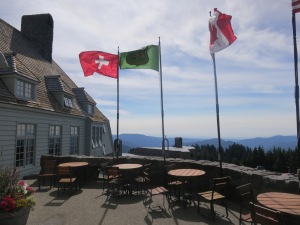 By 11:00, I was finally able to head out again. Slowly, I climbed back up the paved road and turned onto the PCT.

Lots of people were out for a walk in this section. 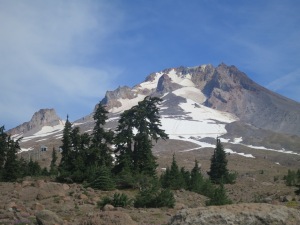 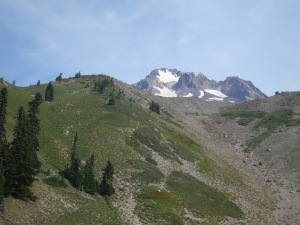 The trail wrapped around Mt. Hood and then returned to the forest, which now had a much more lush feel to it. There were many cascades of water, moss, and ferns. 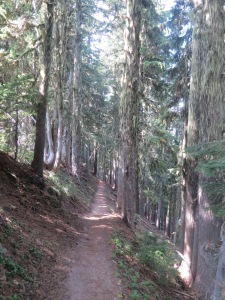 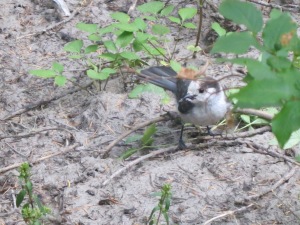 There were also lots of huckleberries! I passed by a woman out on a section hiker who had a hard time drawing herself away from these bushes. She asked me my trail name and mentioned a few other thru-hikers who she had met. As I went on ahead, she said she was jealous of my “super-model legs”!
I found a nice creek to stop at and have my ice coffee and snacks. Very soon after, I reached another ford with milky white rushing water. I walked up the creek, searching for a good place to cross. I made it across one section, but still had several more to get across! My one pole kept collapsing, which made the crossing even more challenging! At last, I had made it to the other side and now had to re-find the trail. I wasn’t expecting to lose so much time at that creek and now felt under even more pressure to hike the remaining 44 miles to Cascade Locks by tomorrow! 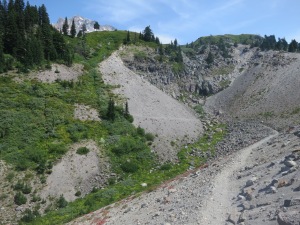 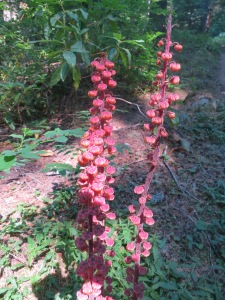 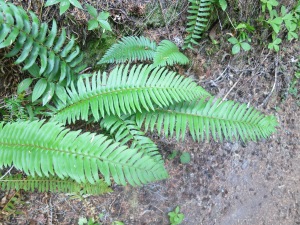 When I reached the trail to Ramona Falls, I branched off the PCT. I was a bit concerned about finding my way back, but didn’t think I could get too lost…
Once I arrived at the falls, I wasn’t blown away. It was nice, but nothing incredibly amazing. 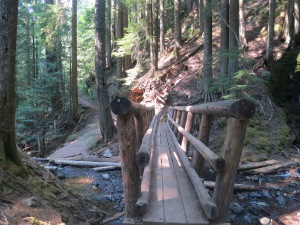 I followed my instincts as to which trail to take when the paths diverged and ended up meeting a southbounder. He wanted to know how the breakfast buffet at the lodge was and if it was easy to collect water from the falls. I told him there was a creek close by, so that wasn’t even an issue. As I continued to walk, I realized that he had been following the creek for awhile. He must have just wanted the more pure falling water!
I passed by another group of young people who were just out for the day and then re-connected with the PCT. A couple of people were set up to camp already. I then reached another creek crossing. The bridge had collapsed and a log had been placed over the rushing water. 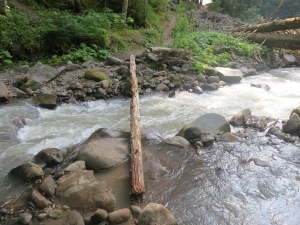 It looked quite scary…I stepped onto the narrow log with my one good pole and suddenly got scared and had to step off. My backpack always leans strongly to the left because of the curve in my spine and I did not feel stable enough. I thought about walking through the water, but decided to give the log one more try. I tensed my stomach muscles and told myself I was going to get across without falling. Somehow, I did! 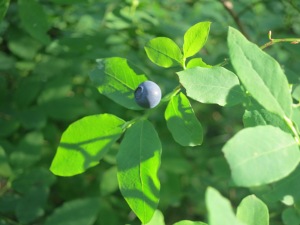 The trail climbed once again. Along the ridge, I was surprised to see someone in front of me. It was Story Time. I thought I was the only northbounder on this part of the trail. I passed by him and then headed down the other side of the mountain with him following fairly close behind. When I found a log to sit on, I stopped for a snack break. I was so tired and needed to boost my energy. I also wanted my own space. The mosquitoes immediately started attacking me. As StoryTime approached he said that he had heard that my stomach had been bothering me. I was extremely perplexed. He had heard? I had been telling him that since the day I met him in the Sierras! And just yesterday, I had mentioned it again to the group of people at the table he was sitting at in the lodge after my lunch. I just can’t understand some people… Once again, he thought that offering me some oreos or nutella might help. “No. No, thank you.”
I encountered several more campers right before the road at Lolo Pass. 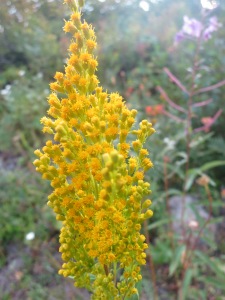 I started the climb up the other side, passing under the power lines, and stopped at the little stream to collect water. StoryTime had also stopped there… He had spread his things out across the trail and was cooking dinner. I patiently filtered my water, as he boasted about being able to keep up with the younger hikers and about his recent forty mile day. As I continued on, I noticed a camp site several feet beyond the water and wondered if he would spend the night there. It was already getting dark and I felt disappointed about the number of miles I had hiked today. I had wanted to get farther down the trail so the next day would not be as stressful. I was now in thick forest with heavy growth along the sides of the trail. Luckily, after a little while, I looked down to see a small clearing. I found my stopping spot! I bushwacked down the slope and began to set up my cowboy camp and cook my dinner. Then, I watched StoryTime pass by and head out into the darkness. He did not seem to see me.
During the night, another animal ran up to my head. “Animal!…”. Sometimes, it was hard to get any sleep!

If you find my posts of value, please feel free to make a donation. I thank you from the bottom of my heart! Please continue to check back as I update the progress of this next phase of my life journey.