I didn’t sleep very much. On one side of me, I could hear the noise of the traffic on the road, and on the other, the sound of breathing from four other people. Four o’clock came before I knew it, and the boys whispered to each other as they packed up, while I lied awake, waiting to say goodbye. Fun Size lowered his head closer to my level and I told him I would probably see him tomorrow. I knew I wouldn’t see him today as he was getting too much of a head start, and because he hikes longer and faster miles than I do. But he was planning on hitching into the town of Burney, while I was heading straight to Burney Falls Park. He said he looked forward to seeing me there.
Not longer after they left, Siesta and Weebee got up, ate a quick breakfast, and packed up. I sat up and boiled some water to make coffee. As I watched them walk away, I thought to myself, “Wow. There they go again.” I never thought, from my own perspective, how much discipline and dedication it takes to hike a long trail like this- getting up early, each and every day, packing everything up and walking over twenty miles to set up camp, get a little sleep, and do it again and again- for five months. Watching other people do this, even for that one morning, allowed me to see what an incredible feat this really was. We weren’t letting anything get in our way- not laziness, discomfort, injury, or any number of things. Every morning, we got up and walked, and walked, and walked.

I didn’t hurry to get going. Instead, I enjoyed the solitude, as well as the use of the restroom, and at 6:30, finally headed out on my own. Not wanting to hike all the way back to the store and then back to the PCT the way we came in, I took a side trail, thinking it was the one Fun Size and I had stopped at on our way in. Before long, I realized that I was lost. My GPS would lead me closer, and then farther away from the PCT. I was growing frustrated at the time I was wasting. A fox-like animal darted through the trees and surprised me. I was happy that I had taken this route only to have seen that tiny glimpse of the animal that I probably would not have seen if I had stuck to the main road. I had to find my way around a barbed wire fence and zig-zag my way through patches of trees and bushes before finding my way back to the dirt road. After walking down it a little ways, I realized that I was now further south on the PCT then where I had arrived last night. Finally, a few minutes after 7, I was back at the intersection where the shin-high, furry boots were hanging. The first few miles of the day were pleasantly cool (surprisingly so) and shaded with trees. I reached the main road and crossed it, soon after reaching the junction to Subway Cave, where I was surprised to see Weebee and Siesta. They had taken the side trail to collect water and expected me to do the same, but I told them that I had plenty on me. I did stop for a snack break before continuing on. The temperature began to warm as I made my way up the rim and out of the trees. 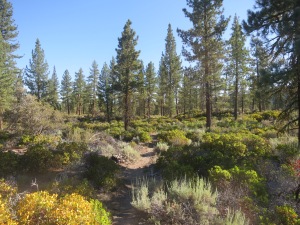 I heard the thumping of poles and labored breathing behind me and stopped to see Grumpy, with his head down, making his way towards me with great force. He had stopped at the cave and told me that I had missed out by not doing so. “Next time,” I said. I had already lost too much time this morning.
By late morning, I reached a parking lot, restroom, and overlook, and although there was not a bit of shade in the area, I decided to take a break here anyway. The bathrooms were being cleaned by an attendant, so I dropped my pack at the overlook and waited.

Mt. Lassen framed one side of the landscape, while Mt. Shasta, which we were heading to, framed the other. As I sat snacking, a car pulled up, and an older man and woman got out to see the view. The woman told me she hadn’t been here in years and I asked her how different it looked now that a recent fire had destroyed much of the area. I often wondered what hiking the PCT was like before all of the fires destroyed so many sections of the trail. Visually, these burned areas are unpleasant to hike through, but the lack of shade in already scorching sections makes conditions even tougher.
The woman returned to her car, and after learning what I was doing out here, asked me if I wanted a cold soda. I told her, “No, thank you” because I don’t like how soda makes my stomach feel. She understood that Pepsi wasn’t the best thing for me, but it was the only cold drink she had. A few minutes later, a truck pulled in and two men got out to use the restrooms. One of them chatted with me and couldn’t believe I was out here alone, hiking 2,700 miles. He couldn’t wait to tell his friend! Before they left, they asked me if I wanted some fruit and my eyes lit up! That was the best gift of all to a thru-hiker! One of the guys came back with several apples and a bag of grapes. I told him I couldn’t carry all of that and just took a few of the grapes. That was more than enough to make me happy. They wanted to know where the trail was and I pointed to the line of dirt going north. “See that dirt path? That’s where I’m going.” They wished me luck and headed on to their vacation week of fishing and drinking. I packed up and headed out to the strip of dirt that wound its way across the rim. I discovered that I had reception at one point, and stopped to send out a message on facebook about having reached the halfway point of the trail. Then, I headed on. The day was growing warmer and warmer.
I found a tree just off trail to eat some lunch under and then continued on. I kept tripping over lava rocks that I could not see because they were the same color of the earth! I had briefly read about other people’s experiences of hiking on the lava rocks on the PCT, and how it had slowed them down, but this was not at all what I had imagined! 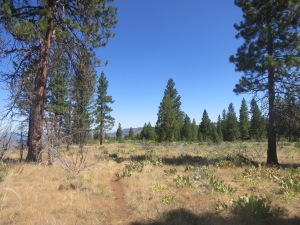 A couple of hours later, I came upon Siesta and Weebee, lounging under the only two trees around! I was going to keep moving, but they said I should stop for a bit. An ant had gotten stuck in Weebee’s peanut butter and she lovingly tried to get it out while fearing that it was not possible for the little creature to make it now. Siesta was lamenting about being behind schedule to meet her boyfriend at Crater Lake, and that she would now not be able to take any rest days until after her rendezvous was over. Weebee said the thought of that was making her feel exhausted!
I headed on, wanting to get in more miles that day than the girls were planning. 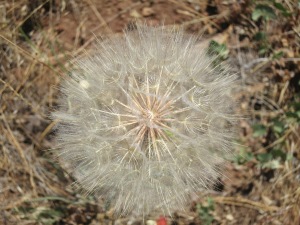 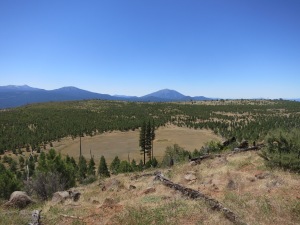 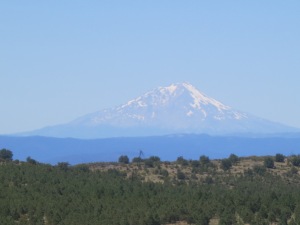 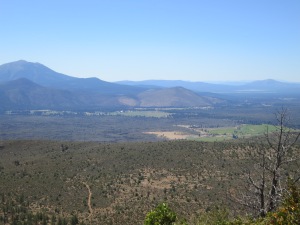 Over and over, I tripped on the rocks, continually saving myself from face planting with the use of my poles. I was surviving the extreme heat and lack of water, but the lava rocks were killing me!
Finally, sometime after 4pm, I reached the reliable cache, named cache 22. There, I found Grumpy, Wagon Wheel, and Stumbling Beef, two of whom I had never met. There were only three plastic chairs, but one of the guys offered me one, as they had already been there for hours, drinking as much water as they could, and then making various powdered drinks with it. It was now 100 degrees out. I read through the registry and filtered the bottled water. As the guys headed out, Ice Bucket came in. He was heartily welcomed. I asked him where Weeds was and he said she was several hours behind because she needed to do some chores in town. I wondered why he didn’t stay with her. Ice Bucket was furious with the heat and swore about having been done with the desert a long time ago.

It was now after 5 and I hoped to get in 5 more miles. Ice Bucket said he was going to camp by the cache. I told him to say hi to Weeds for me and then headed out. My pace felt slow in the heat and the rocks under my feet made the walking even harder. I was tired! Fortunately, I was able to receive several responses to my facebook message that gave my spirit a boost. I was going to keep walking! 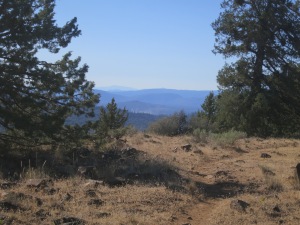 I ran into a couple of cows who seemed to have gotten on the wrong side of the fence! The rest of the herd was grazing on the other side. They wouldn’t listen to me, and I didn’t want to cause more trouble, so I left them there.
As I walked on and the sun began to fade, the landscape became more encumbered with huge lava rocks! This was not a suitable place to camp! I began to worry about finding a place as I continued to walk. Maybe Weebee and Siesta and Ice Bucket had had better ideas than I did!
Fortunately, I found a tree just next to the trail that had a nice patch of dirt in front of it. This would be my bed for the night. I set up my cowboy camp, cooked my dinner, and watched the sun set behind some trees. I wanted to write down some thoughts that were in my head about the day, but when it came time to do so, I was too tired to remember any of them! 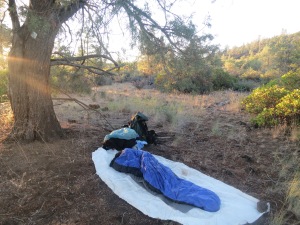 A strange bug was making a loud sound near my head as I tried to sleep. I had no idea what it was and wished it would stop!

If you find my posts of value, please feel free to make a donation. I thank you from the bottom of my heart! Please continue to check back as I update the progress of this next phase of my life journey.