I got up at 6:34 and saw the couple walk by as I was eating my breakfast. They kind of looked like SunDog and Giggles, who I hadn’t seen since the desert and who I thought were far ahead, but I couldn’t be sure. I got on the trail at 8:00, looking forward to reaching the Middle Fork River in 16.5 miles. It had been extremely hot out in the past week or so and I had been hoping to find a place to go skinny dipping, which is something I’ve never done before. I felt like I was finally starting to shed my puritanical roots in California.
I saw no other hikers in the morning hours and surprisingly, I didn’t even see anything that I wanted to take a picture of, either! I crossed several roads and heard a lot of logging activity nearby, which didn’t make me feel comfortable.
I began to grow tired by the afternoon, but was happy to finally see the bridge over the river! 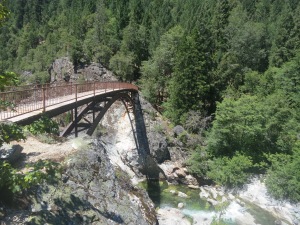 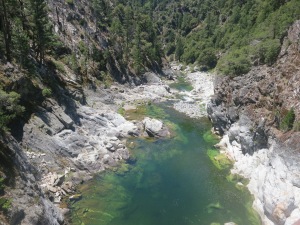 It was only 2pm and I had already walked 16.5 miles! I really hoped no one would come by while I was at the river, but as I walked across the bridge, deciding I would get down to the water from the other side, I saw a local girl in a bikini laying on some rocks. The area was easily accessible from off the PCT. I felt disappointed, but also thought she probably wouldn’t care what I did. 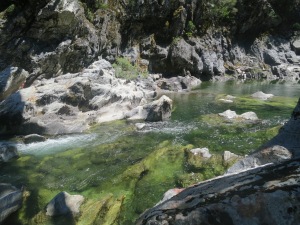 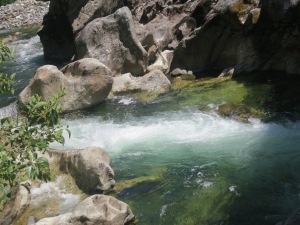 It was tough to bushwack down to the river with my pack on, ducking under branches and hoisting myself up giant rocks. I wondered how other people got through these parts! Finally, I made it onto a rock close to the water. And then I saw two hikers sitting on a rock directly across from me! It was SunDog and Giggles. My heart sank. I didn’t feel like I could go in the water naked now. It took them awhile to notice me, but they waved when they did. I took off my outer layers and slowly dipped myself into the refreshingly cold, clear water. I didn’t go in all of the way because it was a bit too cold for me, but it was nice to sit in it, then get out and quickly have the sun dry me off and warm me up. I watched SunDog and Giggles jump in and fully submerge themselves as I ate a snack and then went back in for a second round myself. Slowly, they began the process of packing up and waved to me again as they headed over the bridge. I wished I could have stayed longer, but my schedule was too tight. I also had to pack up and get going in order to have any chance of making it to Belden by tomorrow evening. I hoped another chance to swim would come later.
The way back to the trail turned out to be even more difficult and treacherous than the way down and I managed to incur several huge bruises on my thigh! Ah well, at least I was back on my way… 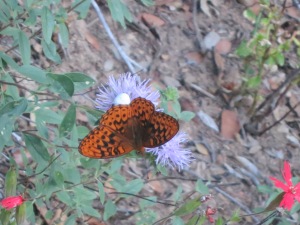 I had a big climb ahead of me and my energy was fading. I took a moment to eat some trail mix before starting up. Fortunately, it wasn’t as steep as I expected. About half way up, I decided to listen to some music for a little boost, even though only one earbud was functioning. Everything was fine until one moment in which my headphones felt like they were being ripped out of my ears. My iphone managed to fall out of my hipbelt pocket (because my paper maps were taking up too much space) and then proceeded to tumble off the hill! Nooo!! Fortunately, it stopped and I was able to retrieve it. However, the screen now had a huge crack in it, radiating out in all directions! Everything of mine was broken!
I made it to the top of the climb and walked out onto a ridge. 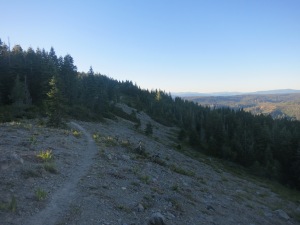 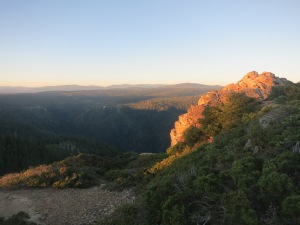 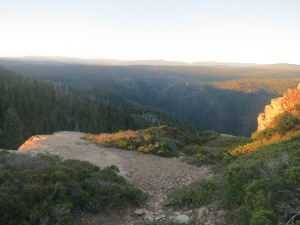 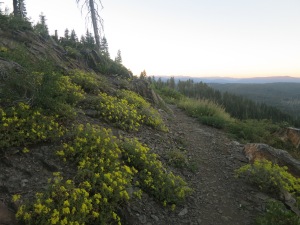 I was surprised to see SunDog and Giggles not far ahead! They are fast hikers, so I felt proud of being able to keep so close to them. After another half hour, Giggles came walking towards me. She said she was going to go back and find a place to camp while SunDog collected water. I wanted to make it to Lookout Rock. I ended up chatting with SunDog for awhile about my stomach problems and then checked my GPS to discover that I was even farther back than I expected! Darkness was approaching and I had to get moving quickly!
I heard a noise that I thought was a bear, but it turned out to be three humans making a bonfire on a rock. When I walked by, one of them invited me for marshmellows, beef jerky, or gatorade. If they had said chocolate, I might have stopped, but I said I was fine and thanked them. I waked past a camping spot on the ridge, but my GPS told me that I still had not made it to Lookout Rock. In fact, my GPS had lied again! This thing was unfaithful! I soon entered back into the woods, where brush covered the entire landscape. I didn’t see anywhere that was possible to camp. The light continued to grow more dim. I wasted many precious minutes checking out every possible spot and still, returned to the trail, without no options. I was now beside another jeep road, where I didn’t feel comfortable. 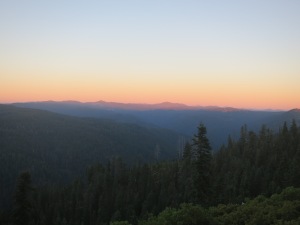 I walked on, checked out a little area between two dirt roads, and finally decided to set up camp there, even though I didn’t feel entirely safe. I cooked my dinner in the dark and tucked myself in, listening to the sounds around me, my nerves on alert.