I didn’t have to get up super early because I had less than 10 miles to get to town and I had already learned my lesson in Mojave about trying to get there in time for breakfast. I made my near black coffee again, adding the last remnants of the powdered milk in my possession, ate more junk food with it, and then packed up my tent. I headed into the woods feeling very tired. I made my usual stops to rest my shoulders, and apply mosquito repellent and sunscreen.

The trail became littered with large rocks, and the going got slow. I had to take my time choosing where to plant my feet. I walked by a few late-rising campers, climbed a small hill, and then took a wrong turn on the trail, heading into more tangled brush and fallen trees across the trail. Finally, I realized that this could not be the PCT and climbed back up the hill.
As I descended towards the highway, I saw the three Israeli hikers trying to hitch. I had planned on getting a ride from Echo Chalet, so I continued to walk. The trail paralleled the highway and I wondered when it was ever going to cross it. The morning was dragging on forever. At last, the trail dumped out onto the road and I dashed across when there was a small break in the high speed oncoming traffic. I walked uphill, past a couple of small houses in the woods and met a woman walking her dog. She told me how long the climb was and that I would be rewarded with a beautiful lake. That sounded nice, but really, the only thing I was interested in was getting into town, where I could settle down, take a shower, and have some real food. Three guys, including Braveheart, passed by as I was nearing the top of the climb. He was excited about meeting a friend.
I descended the mountain and as a parking lot came into view, I grew excited! It was my chance for a ride! However, I realized that these people were just arriving for a hike in the woods. I didn’t know where Braveheart went. I decided to follow the road and see where I could hitch from. I dropped my pack in a parking spot and stuck out my thumb whenever a car approached, not knowing which direction the way into town was. Most of the cars were arriving to park. One of the drivers told me that his friend in the backseat could possibly bring me into town after dropping the others off. He told me to wait. In the meantime, a car came in the other direction. StoryTime was in the passenger seat and asked me if I was going into South Lake Tahoe and if I needed a ride. His high-school friend had driven up to meet him and take him into town. I was dropped off at the Apex, where I checked in, and discovered that the breakfast place was open until 2! This was all I needed to hear to make me happy. I even had time to shower before I headed over!
Then, I walked down to the the Lake of the Sky Outfitters to pick up my packages. I knew I had a lot waiting for me, and felt badly about it. When I told them my name, I got a big reaction. They had heard I was sick and were worried that I had quit and would not be coming to pick up my 8 packages that had been taking up so much space in their room! 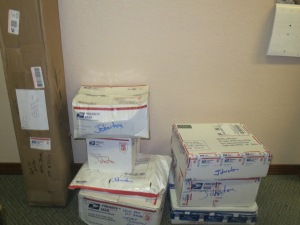 I had sent one box of my leftover gear and food from Kennedy Meadows, an extra box of food from Mammoth, and my regular resupply box. I had also finally mustered up enough courage to call ULA while I was in Mammoth to tell them about the two broken zippers on my hipbelt pocket. The owner immediately said he would send out a replacement to the next place I would be, and I asked him to send it here. I also had the package that Cortney had sent to Mammoth when I was on my way out. Unfortunately all of the fruit she had sent was now all rotten. I also got care packages from the lab, from my friend, Vita, and another one from Tanya! It had taken everyone a long time to get the packages together and somehow, they all ended up shipping them to this one place! I now had a lot of re-organizing work to do! No one could believe the amount of stuff sitting in front of me. “How are you going to carry all of that?”. I didn’t even know how I was going to get it back to my motel room! 5-Star came in while I was there and we chatted for a few minutes. It was nice to see a familiar face. He laughed at all of the stuff around me and said it was going to take me hours to deal with! He was right! I did an initial sort and packed up a big box of gear that I would send home, and then made another pile of food to donate to the hiker box. Then, I took my bear canister, which was no longer required, and the big box to the post office to send away. Unfortunately, I got a little lost trying to find it with this precarious load in my arms!
I then returned to the outfitters and found a couple of other hikers in the back room. The owners let us hang out back there, use their laptop, and even offered us fruit and drinks! It was the most friendly outfitter I had experienced on the trail! I decided to sit down on the couch and rest for a few minutes while I snacked on a cookie. Fun Size appeared and joined The Chosen One, The Messenger, and myself. I laughed so hard at the stories of where these guys got their names. It really takes so little to make me happy.
Then, I got back to work. I managed to stuff all of the remaining food into my pack and one other box. The son told me that he wished he had taken a picture of me sorting and that seeing me with all of my packages was the highlight of his day!
I headed back to my room, started hand washing some of my clothes, and then decided to get some pizza across the street for dinner. It took quite an effort to cross the busy highway in between! Finally, I made it across, only to find the restaurant packed full. I was told that I could wait for a seat to open up at the bar, but I decided that I didn’t want to stand around in such a crowded place for that long. I headed back across the highway and went into the Italian Restaurant. I was directed to a seat at the bar and quietly ate my more expensive meal. I got so tired waiting for my dessert, as it approached 8:00. It was nearly my bedtime! 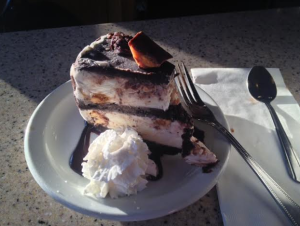