I sat up as the rain drops fell and put my rain jacket on top of my sleeping bag to at least partially cover it. The worst thing you can do is get a down sleeping bag wet because it loses all of its insulation properties and takes forever to dry. After a few minutes of assessing the rain situation, I started to pack up in the dark. I was so tired. Then, the rain seemed to stop. I pulled out my sleeping bag and got inside again, thankful to be able to get in a little more sleep. 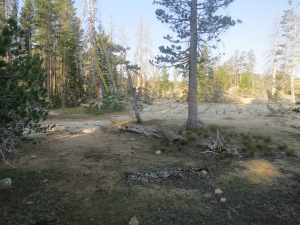 After another junk food breakfast, I followed the trail back into the woods. After a couple of hours, it climbed back up into exposed, dry terrain.

I saw a man ahead, who had collected water from a tiny waterfall that I could hear from the trail. I was disappointed to find out that the PCT veered away from this source of water, however. I was not about to take the time required to walk all the way over to it and instead, continued the climb. My mind was occupied with whether or not I should continue communicating with my Swiss friend. This wasn’t the first time this issue had come up, but now there was a definite reason to make a choice. He wanted to keep me in his life as a friend, but that was a hard thing for me to be happy with. On the other hand, he was one of the few people in my life who understood me and was willing to listen to me. Why would I want to throw that away? I discovered that I once again had reception and found a text from him. He was worried that something had happened to me after I had lost reception the last time we communicated. I thought this was funny because he doesn’t hear from me most of the days that I am hiking and never worries then. I told him I would be in town tomorrow and would be able to talk. 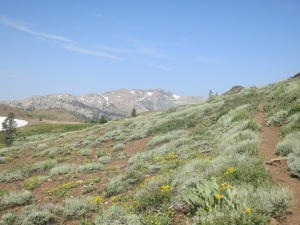 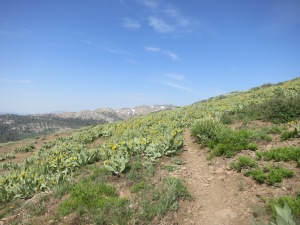 I pulled off to the side of the trail, found the picture of the town info I had taken, and called a motel to see if I could get a room for the next two nights. The fourth of July is the most popular, crowded, and expensive time to be in South Lake Tahoe, and I was worried that all of the rooms would be booked. I felt fortunate to have found an open room, even though the prices doubled for the night of the 3rd and tripled for the night of the 4th. Scat Tracker, Unicroc, and FunSize passed by, singing a song about my name, which was sweet. FunSize asked me if I was enjoying the views. My response was not enthusiastic, as I was too in my head, bogged down with unpleasant things, and still feeling unwell physically. They all continued ahead in a much more carefree state.

It was a hot day and there was a lack of water sources along the trail. I descended back into the forest, took off my pack, and sat down on a fallen tree to take a snack break. I was nearly out of water, but so thirsty, that I drank the remaining bit anyway. For the first time on the hike, I had completely run out of water. I always, always carry much more than I end up drinking, and always have leftover food, so it was a strange feeling to now have completely empty water bottles. However, I had enough confidence and experience to know that I would be okay until I reached the next water source.
I eventually came across the group of three enjoying a break beside a small pond. FunSize had collected water from it because he needed it, but the others were going to wait until they got to the stream ahead, which I did not know about. My collecting bags don’t work with stagnant water, so I continued on until I reached the running stream. As I sat filtering the water, Scat Tracker and Unicroc came by, wondering if they should take the time to filter the water. They decided to do so as FunSize went on ahead. The trail lead down to several small streams. I encountered a father and his two sons heading in the opposite direction and then saw the climb I had ahead of me. I took it slowly. The sky darkened and I asked a bird perched on a rock what it thought about the oncoming weather. 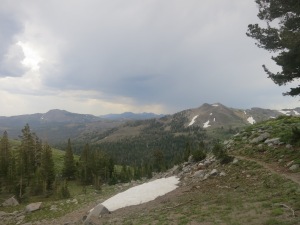 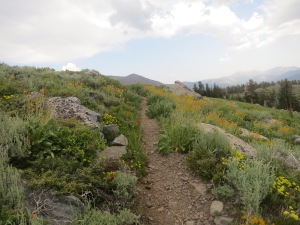 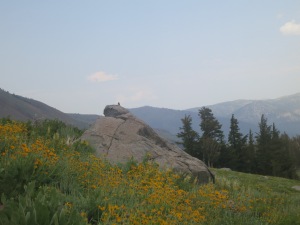 As, I approached the top, I saw a rock that looked like a nice place to take a snack break and later realized that Fun Size had had the same idea. I made my way across a patch of snow and joined him. We could see Scat Tracker and Unicroc on their way, and soon enough, we were all on the rock. We heard the thunder and saw the rain falling over the mountains we had crossed over yesterday. 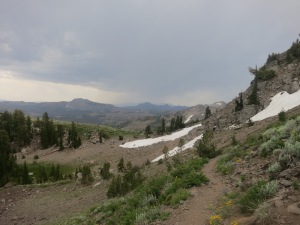 After a few minutes of jokes, we picked up our packs and headed out. Unicroc and Scat Tracker were now wondering whether it would be possible to get a ride into South Lake Tahoe from the highway that we would soon be reaching. Our guidebook did not list this as a possibility, so they weren’t sure. I saw a man down below us and thought he might be able to provide an answer, but somehow, he never ended up on the PCT. We did see a few other people, and I was sure that they would easily be able to get a ride into town. This was the first time I had hiked with more than one person, and it felt nice to be a part of a little group. Someone mentioned that there was a ranger station at the road and we started getting excited about what amenities there might be there. I became very happy about the thought of a possible trashcan to get rid of some extra room and weight! I was also worrisomely low on toilet paper and had been thinking about asking one of the other hikers if they had any extra, but so far had managed to have held off. When we arrived to find a real wooden building, several minutes after the rain began to fall, we became nearly ecstatic! It was the best surprise ever! Unfortunately, all of the hikers who had arrived before us had eaten all of the fruit and goodies that the rangers had put out for us. I looked at the register inside to see that Birdman and Cowboy were now 10 days ahead of me. I knew I would not see them again. Weeds and IceBucket were a couple of days ahead. By this point in the trail, a lot of aspiring thru-hikers had already dropped out. Drama was one of them. One hiker that I knew from the AT told me that he was ending his hike at Tuolemne Meadows. He said the desert had taken it out of him and he was disappointed that there weren’t as many towns as on the AT. As sick as I was, I was 100% resolved to continue on and finish this trail. My spirit loves this lifestyle.
I chatted with one very nice ranger who had lots of questions for us. Some people are so easy-going and pleasant to talk to! There was a group of thru-hikers who were sitting on the porch and weren’t very friendly, but I didn’t care because I had someone nice to talk to. Braveheart appeared and talked about how close the lightning got to him. I don’t know why I rarely feel scared of it. We petted some friendly dogs as we watched Unicroc and Scat Tracker attempt to get a ride. They weren’t having an easy time, at first, but then a nice lady stopped for them. We all cheered and waved them on their way. I had wanted to get in a lot more miles and hadn’t planned on stopping for so long. I finally decided to dig my rain gear out and get going. Of course, I had trouble once again finding the trail on the other side of the road! I finally saw a wooden bulletin board with a map of the PCT and our position on it. It was the first time since I had been on the trail that I visibly saw my progress. I was quite pleased and that made me happy, in itself.

I had walked past the cities of San Diego, Los Angeles, and now San Francisco! That is quite something! A strange man, carrying gallon water jugs, walked by me. He talked to me for a minute and then started up the trail. Luckily, I passed him and never saw him again. As I looked behind me, I saw two other thru-hikers on their way. I felt proud that I was maintaining a strong pace. Eventually, they caught up and asked me to step aside, in a manner that I found not very nice. At least I had my own space again. I took care of my female issue and then found a group of tents set up in the middle of some trees. I was envious of those people. I still had miles to hike in the rain. Two of them decided to take an evening stroll to the Meiss cabin, which I wanted to see as well. The two other thru-hikers walked right by it. I found it fascinating to imagine the summers that this family spent out here and was glad I took the time to see it. 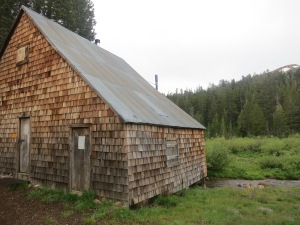 As the evening hours wore on, the mosquitoes made their presence known. I came to a lake where more campers were set up, and veered off the trail to collect water. 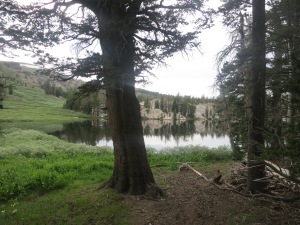 Storytime was staring at his phone screen, wondering where the PCT was. There was a sign a few feet back, pointing out the way… Even out here, we are all attached to our little screens, hoping they will provide all of the information we need. After filtering my water, I walked by the two thru-hikers, who had their tents set up, and were standing with their head nets on. I continued to walk, fending off the mosquitoes that swarmed me.

I felt very tired, but managed to keep myself going until the sun began to set. I found a makeshift spot to camp at the edge of some woods and, for the first time in a very long time, decided to set up my tent. I didn’t know if it was going to rain again or not, and the mosquitoes were too bothersome. I found it nice to be sequestered inside once the troublesome task of setting it up was complete. I cooked and ate some dinner, washed up, and fell asleep. 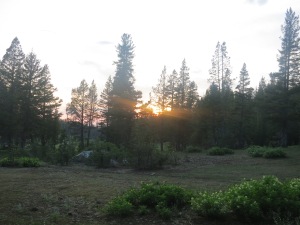