I got up and made my way down to the grassy valley and walked along a winding river. The fog was heavy and it was very cold! I was glad that I had slept higher up in the woods. I thought my hands would warm up as I walked, but they remained frozen, so I had to stop and dig my gloves out of my pack. 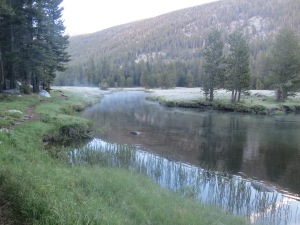 Fortunately, the trail was flat and the miles were easy. The fog lifted and although it remained cold, a bit of blue sky appeared! I watched a deer in the meadow and then was visited by a cute chipmunk. 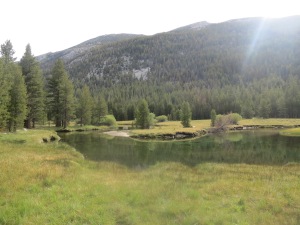 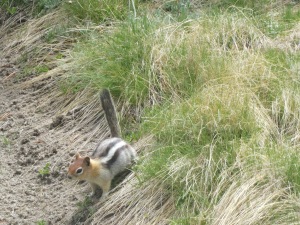 As I got closer to Tuolemne Meadows, I began to see more day hikers, most of whom were not very friendly. The trail took me back into the forest and a guy hiking south asked me if I was a thru-hiker and if I knew Ice Queen. He wanted to know how far back she was, but I wasn’t able to give him an answer, as I hadn’t seen her since Mammoth. I did see a big group of hikers standing around a fire this morning, but they were too far from the trail for me to tell who they were.
After another four miles, I reached a split-off to a parking lot. I knew from talking with Luckyman, that I needed to get a permit from the ranger’s station in order to climb Half-dome. I found a park employee who told me where to go. I paid my $8 and asked how far it was to hike to Half Dome from Tuolemne Meadows. She seemed to think I could do it in a day, but it was already after 11 and I needed to pick up my resupply box, eat lunch, and get sorted out before I could begin the hike down into the valley. I asked about Cloud’s Rest and she said that would take me longer to hike.
I arrived at the Tuolemne Meadows store and headed over to the take-out restaurant. The clouds had returned and it was freezing cold! Whenever someone opened the door, we all stood in line, shivering. Once I got to the cashier, I asked if the chili contained dairy. A cook was summoned and confirmed that it did! I was so disappointed! There is no way I could eat dairy free for the rest of my life! He said the vegetarian chili was lactose-free, however. I asked him if a hamburger would be safe for me and he said he would have to check about the bread. There’s dairy in bread? I told him I would be okay with the small chance. After getting some soy milk for my coffee, I went outside and sat at picnic table to eat my meal. I had to layer up to protect myself from the cold. The wind kept threatening to sweep anything not held down away! Prophet joined me at the table. I hadn’t seen him since the day I arrived at Red’s Meadow. He was in a quiet mood. Syashinka was sitting off on a rock on his own until Prophet called him over. He had just returned from his Half Dome trip and pulled out his map to show me the route. He said it was 16 and a half miles to get to the base of Half Dome! I had to get a move on it! He talked about how hard it was to walk through the crowds of people on the way to the valley and how he hates to be around a lot of people. I told him I do, too! Every piece of advice I had read in my guidebooks said to arrive at the base of Half Dome and climb it as early in the morning as possible to avoid the crowds.
I gathered my things and waited for the bus headed to the Cathedral lakes trailhead. For some reason, it was not coming! A bus pulled up from the other direction and a bunch of thru-hikers got off, including Andrea Jane who started the trail the same day as me, and who I last saw in Idyllwild. She was now alone. I asked her how her feet problems were and told her about my stomach issues and the way the problem had morphed. She told me that I probably got a second infection from the antibiotics and called it something that I had never heard before. She had had it before and said that you need to get a second course of different antibiotics to treat it! At that point, I wanted nothing to do with anymore antibiotics! She sympathized with me.
As I continued to wait, I saw Otherworld pull up in a car driven by her fiancee! She was trying to drop off her resupply box because it wouldn’t have arrived in time if she had mailed it. Unfortunately, the store would not let her leave it there. Afterward, she was talking to another hiker, who I didn’t recognize until she called my name. “Wendy? Is that you?”. It was Tejas! This girl is so sweet! She sympathized with me, asked Syashinka if he was taking some good photos, and said that she hoped she would see me and Otherworld again. She formed a heart with her hands as I headed out with Otherworld. Her fiancee agreed to take me up to the trailhead.
With some nice hugs, I was finally on my way towards Half Dome at 1:15 in the afternoon. I had my work cut out for me!
The trail climbed about 1,000 feet as I started off. Many hikers were heading back to the meadows. One woman stopped to take a photo and I looked behind me to see my first view of the Cathedral peaks. The sight made me smile and relax for a second. I had to keep my forward progress, however, as I had a long way to go!

My energy began to tire and I sat alongside the trail in the grass and ate a snack. It didn’t seem to help much. 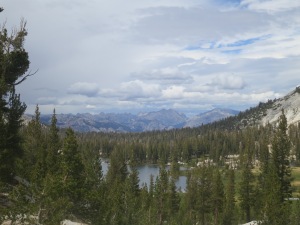 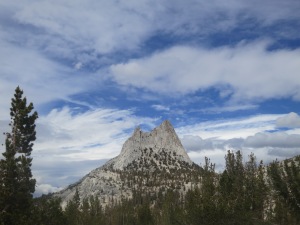 Eventually, I came to a sign pointing to the Sunrise camp and Cloud’s rest and made my way up some huge stone steps. Several campers were set up and I was confused as to where to go. I tried each way and ended up backtracking each time. I walked back down the steps, read the sign, then walked back up, each step consuming a huge amount of energy from me. I finally called out for some help. I was directed back down the stairs again! Where on earth was this Cloud’s Rest trail? Two guys came over and took out their maps. They seemed to have all the time in the world, which was nice, but not for me at that moment! I had just lost 50 precious minutes of time. It was now after 5pm and Cloud’s Rest was over 7 miles away and Half Dome was 10 miles away! I would have to hike in the dark, which I typically don’t like to do, or not make it to Half Dome until later the next day when crowds of people would be there. I felt extremely stressed and exhausted. Finally, I said I would just follow the John Muir Trail and forget about Cloud’s Rest.
The trail climbed again and followed a ridge. I could see a rock formation that might have been Half Dome, but I wasn’t sure. I wanted to take a picture and send it to someone back home who could confirm it for me.

A song popped into my head that I began singing to comfort me a little. As I continued to walk into the evening hours, two deer appeared among some rocks. 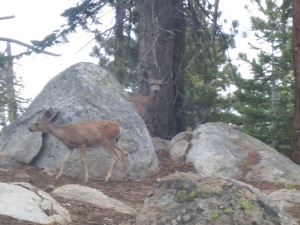 I watched them for a couple of minutes and then began a descent back into the woods. Exhausted, I sat down on the trail and ate a gluten free cookie. I felt sick and tired. I continued hiking, still keeping a lookout for Cloud’s Rest. I came to a stream and saw tents set up nearby, but the mosquitoes were out in droves and I wanted to make a little more progress.
After a small climb, I suddenly stopped in awe. Half Dome appeared right in front of me! I wondered if there was a spot I could camp around there and ended up finding a place close by. At 8:11, I spread out my groundcloth and sleeping bag and got ready for bed. I was going to have to get up as close to 4am as possible. Once I had a moment to stop and realize where I was- in California, in Yosemite, and in front of Half Dome- and that I got here by walking nearly 1,000 miles from the border of Mexico, tears fell out of my eyes. Sometimes, in the daily effort, it’s hard to realize the progress you’ve made, and what you have actually accomplished. I couldn’t believe that I had made it this far after being sick for almost a month. And I couldn’t believe that my bedtime view was this famous rock that most people fly out to visit.

About a minute later, I looked over to see a deer’s head with antlers on top staring at me between two rocks. It was just like a cartoon and the sight made me laugh. It dove behind the rock for a moment and then darted out to my camp space and stood there casually, as if nothing was out of the ordinary. And then it wandered off somewhere.

In the middle of the night, I detected the presence of something large next to me. “Deer! Go away!.” It ran off and did not return to bother me again.