I got up just before 7 and realized that I had rolled off my sleeping pad. It was SO cold! I was hopeful that it was going to be a good day for my stomach, but when I went to the bathroom, it was obvious that I was still sick. I packed up and walked down to the edge of the water to see the view in the morning light. 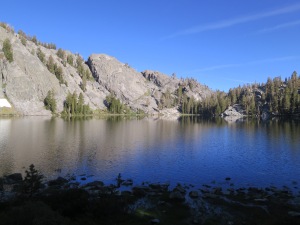 By 8:05, I was back on the trail. As I walked around the small lake, I saw numerous tents sent up and was thankful that I had found my own space last night. The trail contoured pretty lakes and then climbed along cascades of water. 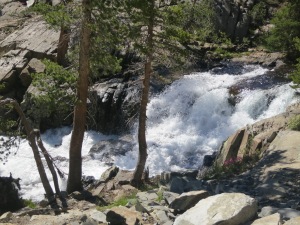 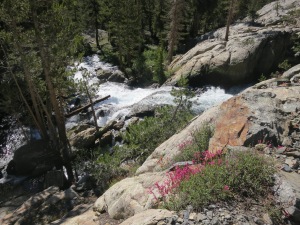 I began to see snow covered mountains in the distance once again. 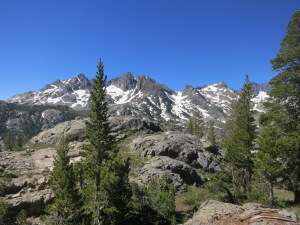 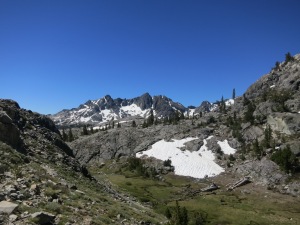 A couple of hours later, I sat down along the side of the trail and ate a bagel with blackberry jam.
About an hour later, I felt a strong cramping sensation in my intestines and immediately had to expel the contents. For the first time in my life, I found out what it was like to have explosive diarrhea. Something was very wrong. I had heard many people talk about having this as a symptom of giardia, but I felt fortunate not to have experienced that part of it both times that I had had it. Something had definitely changed in my sickness, however. It seemed to have moved from my stomach into my intestines and now I was having a different set of problems! 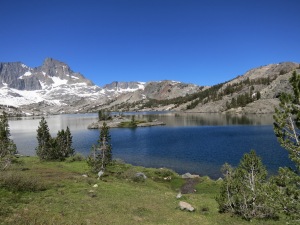 I encountered many day and section hikers in the area, but luckily, they did not appear when I needed privacy. I crossed over a bridge and briefly lost the trail, not realizing that it wrapped back around the lake in the other direction. 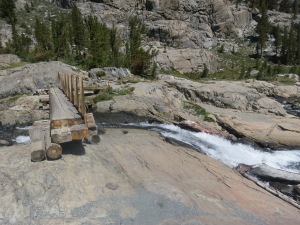 Three southbound women passed me, wearing mosquito head nets. The mosquitoes were becoming more of a problem, but not enough to make me wear one of those things while walking!

As the trail climbed, I encountered several groups of day hikers. The JMT was far more crowded than the PCT!
Gradually, I made my way back down to the intersection of the PCT at a beautiful setting of alpine lakes. I sat down and had a lunch of beef jerky, a kiwi, some salted nuts, and an acai dark chocolate bar. The mosquitoes immediately swarmed me and I had to wipe myself with Deet. This day seemed to be progressing so slowly. The miles were taking much longer than I had hoped.
A couple of hours later, I ran into Billy Goat, heading southbound. He was worried about the thunderclouds forming in the sky, which I found surprising for someone who has spent so much of his time out on the trails. He said he was headed back to his car, so he didn’t have to be too concerned about getting wet. A big storm was supposedly on its way, just in time for my visit to Yosemite! We discovered that we are both from the Boston area and I learned that he used to be a conductor on the same commuter rail trains that I took every day to work! What a small world! He asked me why I was hiking this trail and we talked about what being out here does for our spirits. Billy Goat told me that he doesn’t want to have a home. He said that it is nice for the first night to be inside, in a bed, but after the second night, it starts getting old. I felt the same way during my time in Mammoth! After telling him about my stomach illness, he advised me to find a cheap place to stay for a couple of days where I could rest and agreed that going home would mean the end of my hike. He believes that the body will always catch up to what the mind wants. “If the mind wants it, it will bring the body along.” My mind most definitely wanted to hike the entire trail! He told me about his experience climbing Half Dome in the 90s and that he would likely see me the next morning during his hike south from Tuolemne Meadows. He also said that there was a girl named Tortoise not far ahead of me, who I would probably catch up to. After thanking me for taking the time to chat with him, we went off on our separate ways. 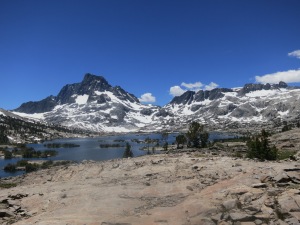 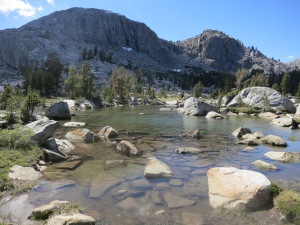 The trail took me along clear pools of water that I seemed to recognize from past hiker’s photographs. Even though I felt like I wasn’t making good progress, I decided to sit down at the edge of one of the lakes for a few minutes. I discovered that I had a little reception and texted Muk Muk. She wrote back and told me that she and UB were at VVR, but that they were going to hike separately from there on out. She had to re-organize her system and was feeling sad about the situation. I let her know that I was planning on taking a couple of days to hike Half Dome, and that maybe that would give her a chance to catch up to me.
I put my pack back on and continued up the trail. I had one steep climb of about 1,000 feet in elevation gain ahead of me. 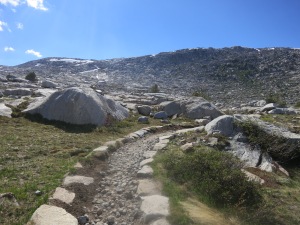 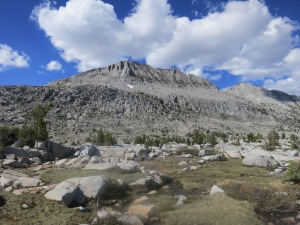 I felt tired and had to muster up some energy and keep my mind positive. My pack felt heavy and the altitude made the going slow. I felt like I was out of shape. All I could do was keep putting one foot in front of the other and stopping as often as I needed to take in more air. 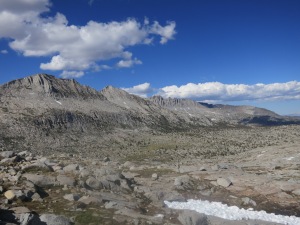 I had another patch of snow to get across once I neared the top. At last I had made it. I tried to find the trail along the top of the ridge, which turned out not to be so easy. I lost it a few times on the rocky descent, as well, but eventually I could look down into the valley and see the contour of the path. I passed by Tortoise and then found a nice rock to sit on and cook my spaghetti dinner, while a couple of curious marmots approached. The meal was a bit too spicy for me, but I really appreciated having a different taste. 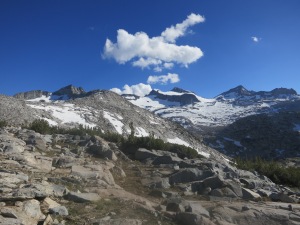 I headed down the trail, instinctively turning away from a big pool of water in front of me, only to realize later that that was actually the trail. I had more fording to do and couldn’t manage to keep my feet dry. Several people had set up their tents in this area. I continued to descend into the forest and saw several other campers. A couple of guys still hiking warned me about how bad the mosquitoes were at Tuolemne Meadows and to be prepared.
As the sun started to set, I had to start looking for a place to set up camp. I had hoped to make it to the bottom of the descent, but I had run out of time. I noticed a flat area in the woods and went over to see if there was a spot for me to camp there. As I walked further in, I saw a couple of fire rings! I found a real campsite! I picked a patch of dirt to spread out my ground cloth and unroll my sleeping bag. Then, I noticed some leftover garbage close by, including a radio. It gave me an eerie feeling for awhile, but I settled down and tried to go to sleep.