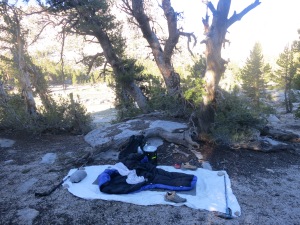 I only had 2 miles to walk before I reached Glen Pass, which my guidebook pages said was the scariest of all the passes. Past hikers had written a couple of sentences about their experiences and I couldn’t make sense of their advice. “Stay to the left of the bowl” and the trail goes over the “spit of land” between Rae Lakes. The only thing I could do was figure it out when I got there! I climbed out of the trees and into a landscape of loose rocks, heading to an elevation of 12,00 feet. Looking down, I saw the most beautiful blue glacier water in a small pond. It was mesmerizing. 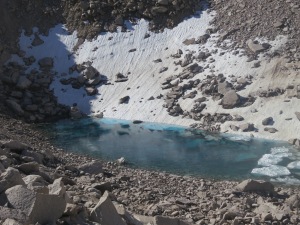 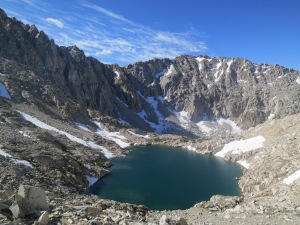 There was no snow on the trail during the ascent, but my pack was heavy and the altitude made the going slow. The other side of the pass was a different story! There was lots of snow to contend with. 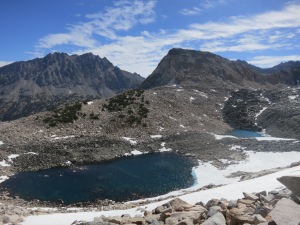 I took it very slowly, choosing my steps, and driving my poles into the snow. In places, the snow was deep and postholing took a lot of time to get through. Occasionally, I slipped, but made my way out unscathed! I slowly made my way down to Rae Lakes and back to cascading streams, flowers, and trees.

I found a tree to sit under and look out over a big lake while I snacked. It was pretty, but I was not feeling well. I wasn’t enjoying the Sierras with my stomach illness.
I walked along the lakes, stepping on rocks to make it across creeks in my path, and then finding a spot of take my pack off for another minute. As I put it back on, two guys approached and said hi. One of them asked me if I was hiking the JMT. “No, I’m hiking the whole thing.”
“You’re hiking the PCT? So are we!”. I asked them their names and one said, “Sexy Legs.”
“Oh, I’ve heard about you!”. The other said his name was Ash. After a brief chat, they headed onwards. I wondered what gave them the impression that I was only hiking 200 miles…
It wasn’t long before I saw them stopped up ahead, chatting with Delaware Dave who was resting up on a hill. He said that he had only hiked 2 miles so far today and was now taking a siesta. I chatted with Ash and told him about my stomach problems and my calf that was still hurting! He said that I just needed to walk it off. I said I wasn’t so sure about that… It had been hurting for a week now! He let me know where they were planning on stopping for lunch and invited me to join them. How nice!
They hiked on at their fast pace and I slowly walked behind. It turned out the lake they were envisioning was non-existent, so they stopped beside a creek to have their lunch. Sexy Legs cooked his 900 calorie meal! I joined them for a bit and then headed back out.
My stomach was really hurting and the miles were becoming excruciatingly slow. Delaware Dave caught up to me and hiked behind me for awhile. He was suffering from exhaustion and didn’t know where it was coming from. We reached a creek that looked impossible to cross without getting our shoes wet. I saw another hiker on the other side who looked liked he had crossed it upstream. I went to investigate but saw no way to get across. Delaware Dave made it across in the meantime and pointed downstream to a fallen tree that I had also seen. I made my way down to that spot and ducked under branches to try to get on the slippery tree. It took me a long time to make my way across the rushing water and only when I made it to the other side, did I see that Delaware Dave was waiting up on the hill to make sure that I made it across okay.
On and on, we walked. My energy was draining out of me. My pack was killing my shoulders and I had to stop and rest while Delaware Dave continued on.
Finally, I reached a camping area with a bear box and took my pack off again. I went down to see if Delaware Dave was okay. He decided that he could walk no more today and would set up his tent and rest for the remaining part of the day and night. He was worried that he had Lyme’s disease, but I thought it was probably the altitude in combination with a heavy pack. I hadn’t seen Sexy Legs or Ash since I left them and assumed they must have taken a nap. Soon enough, they came along and confirmed my surmise. We all chatted for a bit and then left Delaware Dave and headed across the suspension bridge to reach the 800 mile point! I was excited to have people near me for the picture opportunity! The bridge was very bouncy and a little scary to walk on at first, but then felt fun! I felt like I couldn’t take my time, though, because the others were waiting!

I let the boys go ahead and as my breathing became labored, let them do the searching for the 800 number while I stayed focused on putting one foot in front of the other. I saw them stop ahead and look at the ground and assumed they had found it! But they hadn’t seen anything yet. We continued to climb and then I found them looking at a raging river flowing over smooth rocks. I thought that there was no way that I could cross that myself and was glad that there were people with me, but it turned out that they were just checking out this attraction. Ash said that they were constantly finding cool things to check out in the Sierras. There was something new around every corner! I followed them down the rocks to look at the rapids and checked my GPS. “You guys- we already passed the 800 mile point! We are going to have to make our own marker!.” 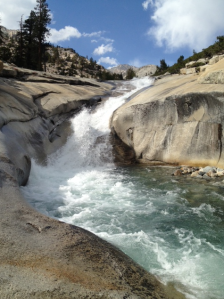 After they were satisfied with observing the water, we went up to a bank and started collecting rocks. Ash started making a “nushuk” and Sexy Legs and I looked at it, confused. We didn’t know what he was making, so we got to work on forming the numbers for our 800 milestone! “I know what pose I want to do!” I said. It was great having people around.

We hit the trail again and the boys took off. They hike almost twice as fast as I do! I found them again at the edge of another creek crossing, trying to scout out where best to cross it. They didn’t find a place where we could cross it and keep our feet dry. I started to take off my shoes, but decided to keep them on when I saw Sexy Legs on the other side. I started across and the boys watched me from the other side. “You’re going to watch me?”. That was making me even more nervous. I told them I was okay and they went on. I ended up losing my remaining snow basket in the rushing water and was unable to cross without getting my shoes wet. I felt like a failure.
I walked on and heard a call. Sexy Legs was up on some hill! He said he was checking out a waterfall. I wasn’t sure if they were planning on camping up there. I decided to sit down in some grass and cook my pasta and peas. Some deer came by to keep me company. 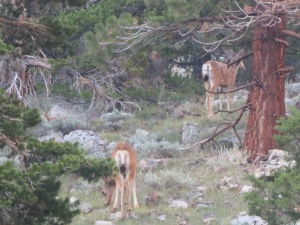 The boys walked on and said they were planning on hiking about three miles and that I was welcome to camp with them. I told them 3 miles was too much for me tonight!
Luckily, I found them stopped about a mile ahead. Perfect! I was so tired and very dejected about only having hiked 12 lousy miles that day. Sexy Legs said he didn’t want to hear it. He and Ash weren’t doing big miles in the Sierras because they wanted to explore and enjoy themselves. They got up at 10 this morning and decided to swim out to an island in one of the Rae Lakes. Sexy Legs had gotten hypothermic in the process and nearly drowned! Luckily Ash helped bring him safely back to shore. He said his lungs were still hurting.
The boys set to work on trying to make a fire from scratch, starting with a cute little nest of straw. Sexy Legs said they always try doing this first, but so far, have not succeeded. It appeared that it was not going to work again tonight, but after a few more attempts, they got it to catch fire! I put on my warm layers and sat on an uncomfortable rock near the fire. This was only my second fire of the entire trip! Ash thought I was very brave to start the PCT alone. (Eh…).
They were both very friendly and polite and I appreciated them inviting me to hang out with them. We each picked a spot to cowboy camp and unrolled our sleeping bags. Sexy Legs asked Ash, “Hey, should we… should we…”. I was sure he was going to ask about drinking some of the bourbon he was carrying or smoking marijuana, but then he said, “Should we have some hot chocolate?” It was one of the sweetest things I had ever heard! I said that sounded good to me! I had my own mix and Sexy Legs tried to figure out how much water he needed to boil for three people. It turned out to be not enough, but it was still nice. We went down to the creek to collect our own water before it got too dark to see and then headed to bed. I felt like naming this little area “Sleepy Hollow”. I felt so safe and content with these boys. It was a good night!