We were told that pancakes would be served at 7. Many of us were conflicted about whether we should stick around and wait for breakfast or hit the trail and get in some miles. I packed up my things and headed over to the front of the house. I got a cup of coffee and sat down on a mattress and listened to the banter. Eventually, we were told to form a line for the pancakes, which were made one by one. It was better than I expected, so I decided not to rush to try to get a ride back to the trail with the others and stick around for a second one, instead! 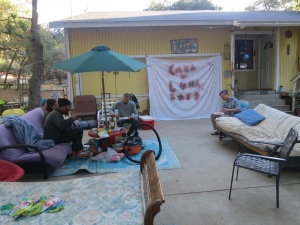 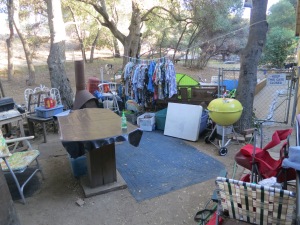 A van full of hikers took off, including Tumbleweed, Puma, Walking Home, Cattywampus, and Iceman. Spoonman, Sprinkles, and Skinny D were going to spend a few days hanging out there. Only one other guy wanted a back to the trail with me. While I waited, I discovered the collection of rocks painted by the hikers who had hung out there during the day. My hiker companions were also impressive artists!

We all had to have our pictures taken before we were allowed to leave. I had mine taken twice- the first by Joe, which was the normal one, and then later by Terri, who did her signature move to get a better expression from us!
She dropped us off at the trailhead with a hug, and then it was back to the shadeless hills! It took only a few minutes for the other hiker and I to find our own space and for the rest of the morning, I remained alone. 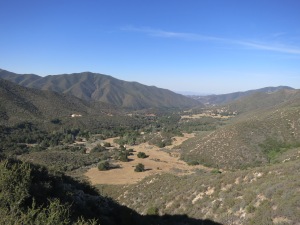 About seven miles away, there was a small water cache. (Man, I am sounding spoiled! It’s true. There are so many people helping us along this trail these days, purely out of the kindness in their hearts. I often wished I could have done this trail when there wasn’t much assistance, when it was more challenging…). There was a female hiker about to take-off, who I had never seen before. I sat down at the picnic table, had a little snack, refilled my water and continued on.

I started to feel tired and needed another break. I spotted a tree that looked good for sitting under and then saw that a couple of other hikers had also chosen the same tree! I felt like being alone, so I decided to sit away from them. (I guess that was a bit creepy). Then, I noticed that 5-Star was one of the hikers, and he invited me to join them. He and the girl were both about to take naps. That sounded wonderful! It was something I almost never allowed myself because I feel like I have to keep hiking to put in the miles that I need to. I decided I could lie down for a few minutes. I lightly napped and then woke up to snoring sounds. I decided I had better get moving. 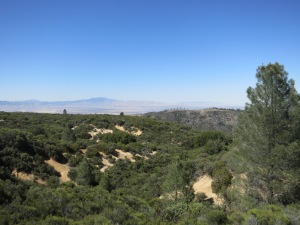 Once back on the trail, I found that I had reception and needed to do some communicating with my resupply people on what to send to Kennedy Meadows (I needed winter gear and a different outfit, which was the thing I most couldn’t wait for! This desert skirt was way too big!). I also let them know that I was now 4 days ahead of schedule. It wasn’t so comfortable to sit in the hot sun on the dirt to take care of this and I felt like I was losing a lot of hiking time.
5 Star passed by me on one of my pack breaks. Our next water source was a guzzler up ahead and the directions on how to get to it sounded very confusing to me. I reached the dirt road and looked around. Then, I heard 5-Star calling to me from across the way. Luckily, he directed me on how to get up there! The water was below the surface of a concrete slab and part of me just wanted to stop there for the night! 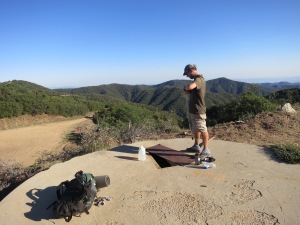 A nice, flat spot right next to water seemed ideal! After I filtered my water, I lied down for a moment. I could get used to these kinds of breaks! 5-Star rested against a metal traffic barrier and wondered what one of those was doing up here. It was a good question!
We both decided to press on and make it to the Sawmill Campground. Views of the Mojave desert we would soon be crossing appeared. 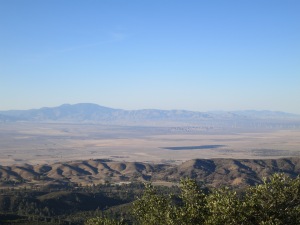 The campground was about a quarter mile off the trail- uphill, of course! I passed by a couple of tents and then saw two other hikers at a picnic table. I went over to join Chief and Bean for dinner. They had already set up their camp. They informed me of a very loud party across the way and advised me to stay on this side of the campground. 5-Star joined us at the table after setting up his tent. Night was falling, so I wandered over to find some space of my own and set up to cowboy camp. I discovered that I had reception and stayed up later than normal, texting a friend while I charged my phone with my external adaptor. It’s a rough life out here…