One of my tent mates woke up very early and already headed out before I got up. I quietly packed up and headed over to the gate. Luckily, John Deere offered a group of us a ride downtown. I wondered if I should have another real breakfast before I hit the trail, but decided to compromise and go to the bakery instead. 5 Star joined me. 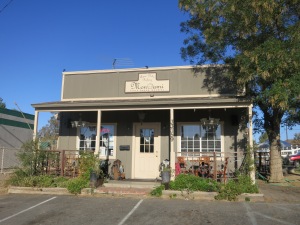 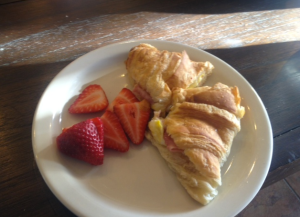 I enjoyed a breakfast sandwich on a croissant and coffee and then noticed UB heading back up the hill! I called after him and he joined us at the bakery. He wanted to know how far I had planned on hiking today- whether I was going to make it to the Anderson’s or not. I told him that 24 miles was too much and that I would probably only do about 20. He told me not to be surprised if he came and found me during the night.
I headed out alone, continuing the road walk that brought me into town.

I had no idea how long it would be until I reached the actual trail! Finally, I reached the dirt path that had now become my home. By this time, I really needed to pee, but I could still see houses! 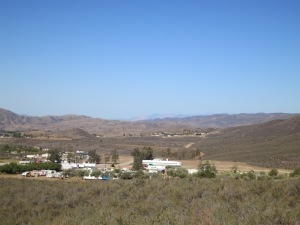 I had to hold on a bit longer until I rounded a corner. The trail wound through pretty desert hills. 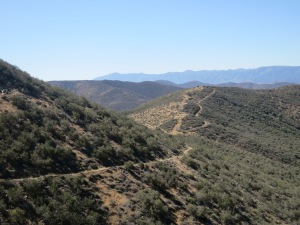 As I looked back, I saw a couple of other hikers well behind me. I stopped to read a register placed along the trail and take my usual pack break. Gradually, they caught up to me and passed me on another break. They looked like a very energetic and happy couple with light packs and I had to remind myself that my pack was much heavier and that my pace was just fine.

I reached a water cache that was tucked into a grove of trees and found the happy couple, who I learned were named SunDog and Giggles, finishing their lunch. SunDog asked me if I wanted his leftover brown rice! The idea was not at all appealing to me, so I declined. They kept talking it up, though, and I finally agreed to try it. I got out my jetboil, and dumped out the candy I was storing in there. I felt embarrassed about the display of my junk food while they were obviously eating much healthier food. The rice actually tasted good and I realized that I needed to start eating better! Giggles told me that it came from a California company called Lundberg’s. They packed up and continued on their way and as I was getting ready to leave, Spoonman, Sprinkles, and Skinny D rolled in. They had all hiked at least a part of the trail before and were planning on taking a shortcut to the Anderson’s. They told me that I would come upon a surprise later in the day.
I continued up the ridge, wondering what they were referring to. Spoonman was the first of the three to pass me with his ipod blaring out loud. The others followed behind with empty-looking packs. I took my time and hiked at a pace that was I was comfortable with. 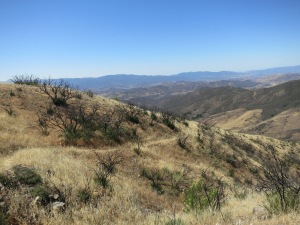 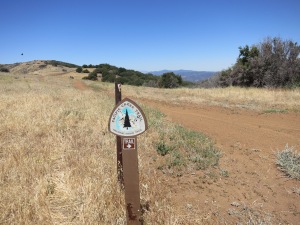 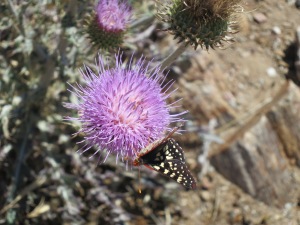 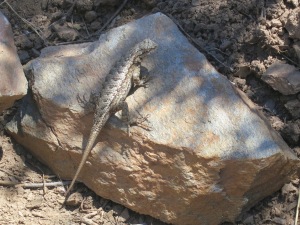 In the late afternoon, I reached the Anderson water cache and found a bunch of hikers sitting on chairs in a little cove which also contained Halloween-like plastic decorations. I was informed that this was the surprise they had mentioned and I disappointingly said, “But, I already knew about this!”. (That’s what happens when you read other people’s journals!). I sipped on some water and listened to SunDog’s scary stories about the snow in Washington. He and Giggles were forced to end their hike in 2007 at Snoqualmie Pass due to the amount of snow that had accumulated. I assumed they were hiking so quickly to beat the snow this time! Other hikers chimed in, saying that mild winters meant an early winter the following year. Bambi, who is from Washington, told me at the Saufley’s, that even if it is not an early snow year, that the last two weeks in September are cold and consistently rainy and that he did not want to be hiking in that. I had originally planned on finishing my hike by September 30, but with all of these warnings, I knew I had to aim for mid-September.
Sprinkles, Spoonman, and Skinny D headed out for the road walk shortcut while Giggles, SunDog, and I chose to remain on the PCT. 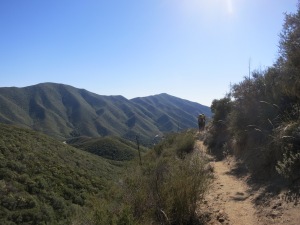 There were only a few miles to go until we reached the road, but I was growing tired. I found a bench next to a plaque and took a moment to rest on it before continuing on. SunDog and Giggles approached, hiking together as if they were a unit, step for step. They decided to rest, and I found enough energy to make it down the hill to the road. I was going to make it to the Anderson’s after all! A truck drove by and asked me if I needed a ride. Yes! She was a firefighter who worked at the station I had taken a break at with Dinnertime and JT! She knew where the Anderson’s lived (a couple of miles away) and dropped me in front of their house. I saw a bunch of hikers that I didn’t know sitting in front of the house in Hawaiian shirts. I had heard a lot about this place and wasn’t sure if I wanted to stop here, but decided it would be good to get the full PCT experience. As I retrieved my pack from the back of the truck, I said, “Oh, boy.”
Terri Anderson came over and welcomed me with a hug, and Bean (the only hiker I knew) gave me a tour of the property. There was an outdoor shower and a grove of manzanita trees with little camping spaces that extended as far back as we could imagine. I chose an empty spot next to Bean and went over to shower. I couldn’t get any water to come out, however, so I had to ask Joe for help. I guess I was lucky to arrive in the evening because there was no way to control the water temperature and it was scalding hot during the day! This was my first outdoor shower experience!
I went over to sit with the others, feeling a bit uncomfortable, but relieved that I had made it in time for the taco dinner. Terri explained the rules and said she would be watching us and come over to smack us on the backside with her wooden spoon if we didn’t do as she said! The group that was staying there was very quiet, and while I was glad it was not a party atmosphere, I grew quite bored. I was happy to return to my little camp spot and get ready for bed!