I got up around 6:15. It was another cold morning, so I snacked in my sleeping bag. I packed up and went out to the rocks to check out the sunrise. It was as equally as unimpressive as the sunset. (For all of the romantic notions that people might have about seeing the stars and gorgeous sunrises and sunsets in our lengthy time outside, that very rarely happens on an excursion such as this. Most of the time, I am camped in the trees with no views to be seen, the weather is much more cloudy and rainy than sunny, and I can’t stay up long enough to see if the stars are out…) 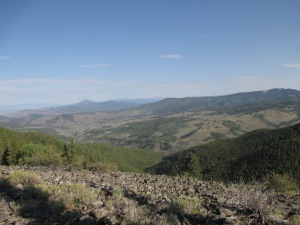 I was on the trail by 7:31. My energy was low, and the miles dragged on. It didn’t help that there were no great views (which always boost my energy). I just put my head to the ground and plugged away. My happiest moments came when I saw a scavenger bird hanging out in the meadow bushes, and a marmot playing in the remnants of a log cabin. 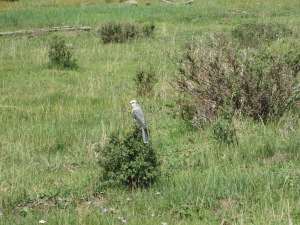 The difference between how I had felt yesterday and how I felt today was extreme.

In the afternoon, I saw a lone mountain biker. He asked how I was. “Fine,” I said. He laughed. In actuality, I didn’t feel fine. I felt extremely tired. It was a hot day and the heat always sucks the energy out of me. I imagined reaching Baldy Lake and relaxing for a bit along its shore. Then, I discovered that it was a half mile off the trail! Extra miles! 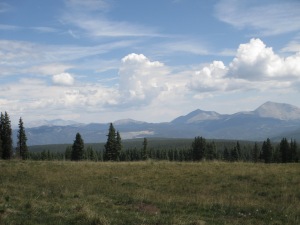 I tried to cover 10 miles before noon. At 11:45, I found a big pine tree on the top of a hill near the end of segment 16 to eat lunch under. It was windy and dark clouds were approaching yet again. I was very chilly. 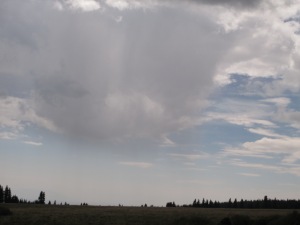 The “trailhead” was completely unrecognizable! Someone would have needed to have driven in with an off-road jeep if they wanted to start the next section! (It was also irritating that the mile points and landmarks in section 16 in my guidebook were way off! We rely on those points to keep track of where we are.) 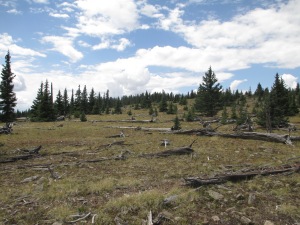