I got up at 6, showered, packed up, and headed out around 7. The hostel owner was unfortunately going out of town that morning and wasn’t able to give me a ride back to the trail like he did for most of the hikers. So, I had to find a ride on my own. As I walked up the main street, one of the coffee shops was just about to open. The lady was bringing the tables and chairs outside. A father and young son were already waiting. I decided that I had time for a snack, took my pack off, leaned it against the brick wall, and waited for them to open. There weren’t a lot of choices for baked goods and the few they had were absolutely enormous! I ended up getting a peppermint paddy cupcake and a coffee (which was very strong!). It was the best breakfast ever! The nice girl from Sweetie’s came in to deliver some baked items, and I felt happy to see a familiar, friendly face. I went to the bathroom to get washed up and saw a decorative sign that simply said, “Journey.” It made me stop and reflect. This walk I was undertaking had meaning.
Highway 12 was supposedly 12 blocks up, but seemed more like 24. 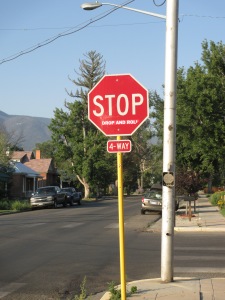 This was one of the roads that I wished any of the passerbys could have given me a lift, but that didn’t happen. I tried to find a good spot to hitch once I reached the highway, and stuck out my thumb. Many cars passed without stopping. Then, a truck with a wagon attached pulled over! He asked where I was going and told me to get in. As I was about to open the door, without warning, he decided to turn and pull-in off the road! He very nearly ran over my foot!
I put my pack in the back of the pick-up and joined him in the front. He told me that he was headed that same way to chop wood. His name was Daniel, he was originally from the Upper Peninsula in Michigan and had moved to Salida not too long ago. He spent a lot of the ride talking about his 24 year old daughter, Madeleine, whom he was extremely proud of. She was a very bright girl and had done extremely well in her biology studies at the University of Michigan. He shared a favorite memory of her as a little girl on a camping trip on which it rained for three days straight and everything they had was wet and muddy. When she appeared out of the tent with her pink sundress over her muddy overalls, it instantly brightened his spirits.
He drove me all the way to the Monarch Pass trailhead, but that wasn’t where I had gotten off the Colorado Trail. So, we turned around, looking for the CT access point. I remembered what the area where I hitched looked like, but I saw nothing like it along this Highway. For 2 hours, we drove back and forth, searching for the unmarked trail, stopping to ask anyone we could. At one point, he said, “I’m getting angry!” and I tried to calm him down, “Don’t get angry. It will be okay.”
We finally reached the probable place where I had hitched in. He pulled over and as I got my pack out, he went across the street, looking for a trail marker. He saw one! Yay! I looked in my guidebook, and it said that the next 2.9 miles were road miles that could be accessed only by a high-maintenance vehicle. He looked at me and asked if I wanted him to bring me up to the trailhead. Yes! It was already 9:35 and I had lost a good deal of hiking time. I would be crossing another 4 mile exposed route later in the day and had to be careful of the impending storms. So, back went my pack in the back, and up, we drove, slowly and carefully over very bumpy terrain. Hooray for high maintenance vehicles! At times, we weren’t sure we would make it, and he hoped there would be a place where he could turn around (the road was very narrow). But it all worked out. We found the tiny dirt parking lot, and got out to say goodbye. I asked him for his address so I could send him a thank you card, but he declined. So, I told him I would give him a hug as a thank you, instead. He told me to look him up if I ever came back to Salida and he would buy me a meal at the restaurant he worked at.
I started my walk feeling good, strong, and happy (despite carrying food and supplies for 105 miles!). It wasn’t long before I spotted three women ahead of me, who were doing a lot of talking. When one of them noticed me, she said, “Let’s let this ambitious hiker pass.”
Another one asked where I was going. “Oh, you are VERY ambitious!” Their names were Kathleen, Irene, and Gail, and they were very friendly. We talked about the Appalachian Trail, and they were just as amazed as the people that I had met earlier in my trip. I asked them why and they said it sounded so idyllic to them- so much green! The climate out here was very different and often arid. 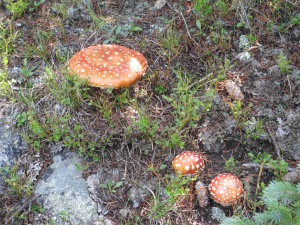 I continued on my way, still feeling good. The climb was not very difficult. 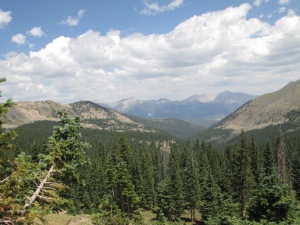 Shortly before reaching the alpine environment, I spotted 2 deer (or possibly elk) in the forest! I continued to climb, and for the first time, I saw a wooden sign at the summit! At last, I could see my destination, which psychologically greatly helped. The wind was very strong at the top. I took off my pack, took several pictures, and felt very happy. (The ladies were nowhere in sight!). I had remembered that the cyclist that I had chatted with on the second day had told me that Monarch Pass was his favorite part of the trail, but I didn’t see why. I had already seen better views earlier in my hike. 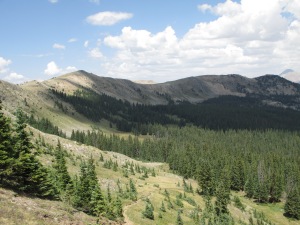 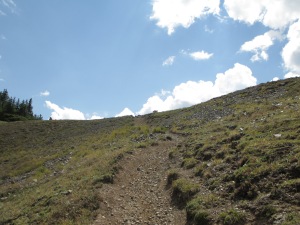 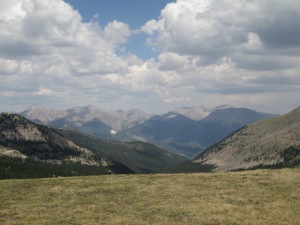 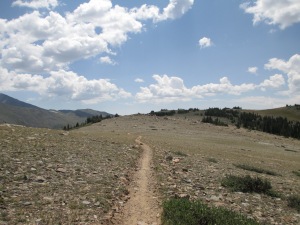 On I went, walking along the exposed ridge, stopping to look around often. About a half an hour later, a woman hiked toward me. She stopped and wanted to chat. She was fairly quiet and there were often long pauses, but she kept looking at me, definitely wanting to continue talking. I had kept my pack on, knowing that I had four miles of exposed tundra to cross and it was already 1:30 in the afternoon! I wanted to keep moving! I finally had to put my pack down because my shoulders were in too much pain. After a half an hour, I told her I needed to be on my way. 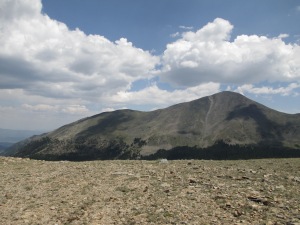 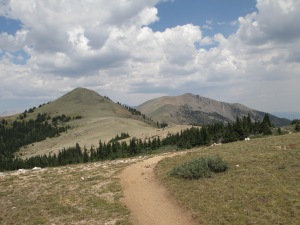 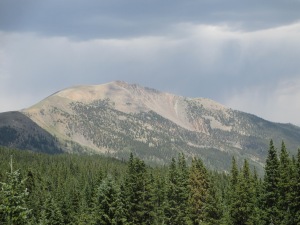 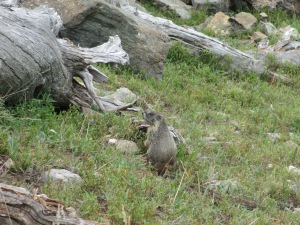 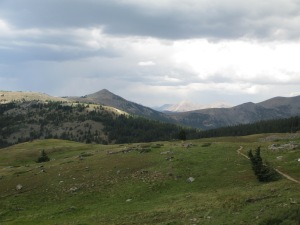 I walked as quickly as I could, checking the sky for dark clouds. Before I got to the trees, thunder began to rumble and dark clouds overtook the skies. I couldn’t afford to take any pack or food breaks. I had to keep moving. At last, I reached tree line and sat down to eat some lunch. (the peppermint paddy cupcake had given me plenty of fuel for many miles!) 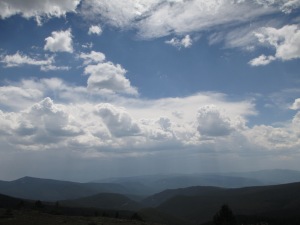 I continued on, passed the only shelter on the trail (in the distance), saw mountain bikers ahead, and a hiking couple taking a break in the woods to my right. I continued onto a dirt road, and at some point, saw a pipe with water coming out to the left of the trail. I wasn’t sure if it was safe, so I passed it by. But after a couple of minutes, I decided to check my guidebook pages to see if they said anything about it. It said it was a piped spring! So I returned and collected water. I sat down on the side of the trail and filtered it, as the rain began coming down again. An ATV rider rode passed me. It continued to rain as I walked, and I became very cold. In the distance, I heard ATVs roaring and what sounded like kids making mooing sounds (rather unpleasant). Occasionally, I would stop underneath a pine tree, which sheltered me from the cold rain, but standing still only made me grow colder. So, I continued on. The lady I had talked with had mentioned a log cabin a little ways off the trail, but the ATV riders had taken it over, so I just kept walking. The rain was coming down hard. I passed an outhouse and the parking lot and began the next section. A man appeared on the hill ahead, seemed to look at me for a minute, and then disappeared back. It was a bit unnerving. Later, I saw him with a woman and some baskets. I guess they were just picking something.
At the base of a grass hill, I came to a large tree that was dry underneath and stationed myself underneath it. I added another layer, cut my ripped fingernail (very hard to do with cold, numb fingers!), and waited for the rain to slow. Then, I continued on, climbing again, and then passing through grassy meadowlands with lots of rocks (not good for camping!). Occasionally, I would wander off the trail to look for a camping spot, but I was having no luck. At one point, I passed through a forest area and saw lots of hail and gigantic puddles all over the place! I was glad I was not in this area when the storm hit! 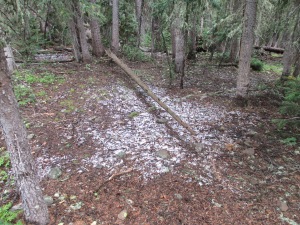 I continued to look for a spot to camp, but it was either too wet in the woods or too open in the meadows. I went through a cow gate, through an open expanse, through a rocky region, and then climbed up a hill. At the top, I found pine trees! I went in aways and decided I could camp there. But then, I decided to go down the slope and see if there was a better area down there. There was!
As I set up my tent, it began sprinkling again! When it stopped, I made a pot of macaroni and cheese, which again was cold, clumpy, and disgusting! I wanted to watch the sun set on some rocks a couple of minutes away from my tent, but it was not a good night for it. By the time I got into my sleeping bag, it was 8:20. I was too tired and it was too dark out to write anything in my journal. 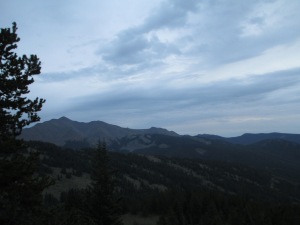