I fell asleep hard in the morning hours. I was exhausted! A little after 6, I woke up feeling like I had a sore throat. 😦 I ate some granola and a trail bar in my sleeping bad, texted back to my Swiss friend concerning the question he had about the picture I had sent him, and felt sad about him for a couple of minutes. After packing everything up, I was on the trail at 7:23. The nearly 2 mile climb was very steep first thing in the morning! And the view wasn’t so beautiful at the top. 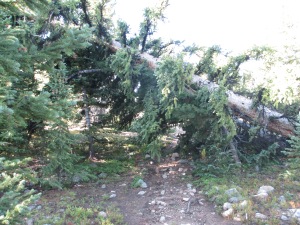 The environment was very arid. The man yesterday had talked about the descent being very steep, but in actuality, it was not (you should never let anyone else’s opinions affect your own experience…) The trail was gravelly, though, and I lost my footing and almost fell. My knee twisted, but I hung on. As I approached Pine Creek Basin, I saw a sign to Elkhead Pass! (the mysterious trail I had wanted to take yesterday!). The man from last night was sitting near the creek, fiddling with his steripen, which wasn’t working even in the clear water! (I was glad I had a filter on this trip).
I collected water and got very chilly. I was still feeling sick and very run down, so I put the emergen-C powder that I got from the hostel in Breckenridge into my platypus bladder and hoped it would help fend off the sickness. I also took some vitamins and ate some soy nuts, fig newtons, and chocolate-covered goji berries for good measure. I decided to keep my rain jacket on to try to keep my core warm as I resumed climbing.
A man with a nice camera and his son hiked toward me. They told me that the man ahead told them there was “a lady” behind. The father said that if he ever thru-hikes the Colorado trail, it will be on horseback.
It was a very slow-going day. My feet hurt and I knew that I needed new insoles. The ones I had had definitely lost their support! My right big toenail was also hurting. There was plenty of water in this section, but the environment was arid. There was also no cell service. When I finally reached the second peak, the views were nicer. 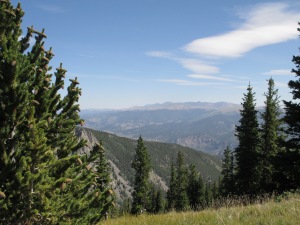 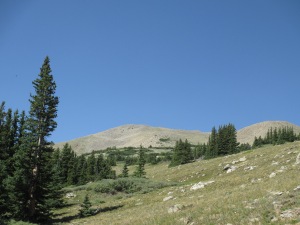 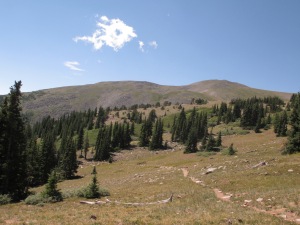 I sat down to take a short break. It reminded me of Switzerland a bit. The man passed right on by, not slowing down to take in the nicest view of the day. He wondered what the next section would be like with all of the downed trees from the huge winter storms. Just a few weeks ago, this section was impassable, but a trail maintenance crew put in a lot of effort to make it passable again. I hadn’t realized this section was approaching so soon! 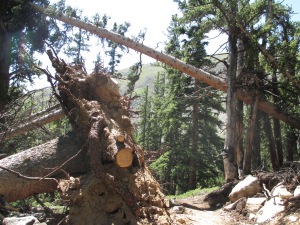 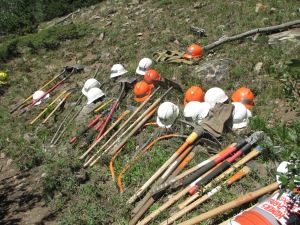 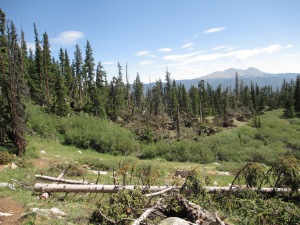 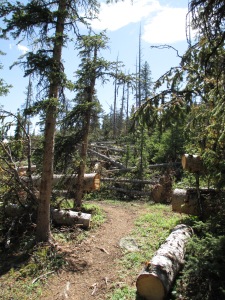 I caught up to the man again at the creek, and this time it was me that kept going. (Honestly, I prefer hiking alone with no one in the vicinity. I never feel like I am too slow or need to be keeping up with anyone else’s pace, and I enjoy the solitude). I continued on to the section with lots of downed trees. It was a very warm day, and I took my pack off for a moment at the top of a dry climb and looked around. Then, I continued on. All of a sudden, I heard an incredible amount of noise in the forest! I stood still. I knew it was a large animal- maybe a bear. And then, a whole herd of deer (or elk) raced down the side of the slope, crossing the trail in front of me, and crashing into trees well below me! It was incredible! One of them, with small furry antlers, stopped at the trail and looked at me for a second, startled. Two others seemed too scared to make their way down past me and remained at the top of the slope, one of them looking at me. Before I could get out my camera, they had all disappeared. Wow! I had never seen anything like that before!
Later on, I saw another grouse. I tried to keep my mind strong and not let my body get sick. And along the way, a solution to what I could wear as a make-shift bathing suit top in the hot springs came into my head! I could use my buff as a tube top! Problem solved! I knew I had been carrying that with me the whole way for some reason!
I took a long (40 minute) break at the creek at mile 15.2 into this section. 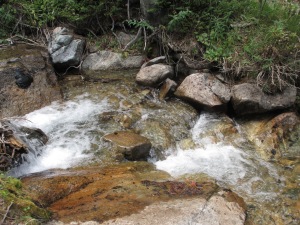 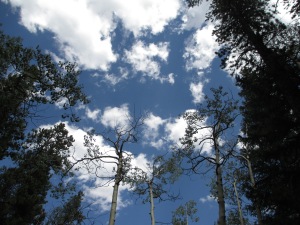 I ate, collected and filtered water, and rested for a few moments. Again, the man passed me. There were 3.3 miles to the end of this section, and then, another big climb. I was so beat!
As I was signing in at the trailhead, I met a man who asked me if I was hiking the whole trail. “Are you doing it all alone?” He thought that was really good. There were big tent set-ups (non-backpacking) in the beginning section. I pushed on to my own space. At first, the terrain was surprisingly level, but then it got incredibly steep! I was having a tough time! I was carrying three liters of water and felt dead tired. The trail consisted of loose dirt and had probably the steepest incline I had encountered yet. It took an enormous amount of energy to climb. I had to sit down a couple of times to catch my breath. Slowly, slowly, one foot in front of the other, I climbed. I had no idea how much longer I would have to climb until I found a camp spot. I just hoped it was soon! I sat down and ate a crunchy peanut butter think thin bar, some choc. covered gogi berries, and a little peppermint patty to help boost my strength and morale. I was cooked and just wanted to be finished! The steepness of the incline and gravelly under-footing persisted. Each step was a struggle.
Finally, it leveled off and entered forest. I found my campsite at 5:30! I set up my tent, cooked dinner, hung my Ursack, and got into my sleeping bag at 7, just as it started to sprinkle. Tomorrow starts with more steep climbing, and then one more pass. I hope I pass out hard tonight! 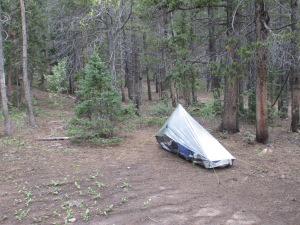