I got up around 6- a bit of a late start to my 4,000 ft climb, but I also really needed the rest. As I got ready in my tent, I heard groups of loud men making their way towards Elbert. It made me feel behind! I got on the trail just after seven, and had it all to myself for awhile. I was breathing hard. My pack was too heavy with all the food I was carrying. I was glad no one could hear me. The same kind of friendly birds visited me again and I gladly welcomed the break.
As I continued the climb, I passed a man who was already dripping with sweat! He was overweight and wearing a cotton sweatshirt. His daughters ahead of him had to keep stopping to wait for him. 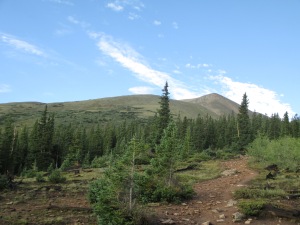 Once I got above treeline, more athletic people started passing me. This was the most crowded part of the trail that I encountered so far (actually, I wasn’t even on the CT at this point). There were many runners springing up the mountain and they made me so jealous! I so wished I could drop my pack and move faster! (I was also jealous that they lived in CO and were already acclimated to the altitude!). The temperature dropped and I decided to change into my long sleeved shirt along the side of the trail. Slowly, I plodded on… 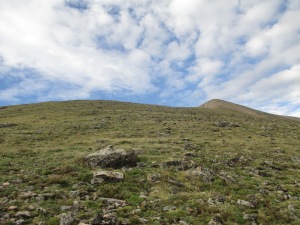 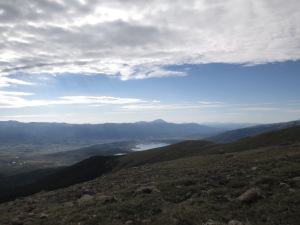 A group of three teenagers came up behind me, talking about the Appalachian Mountains amongst themselves. One of them asked another what altitude we were now at. The girl thought we were at 12,500 feet. My spirits sunk a bit. It felt like we should be so close to the summit now! They scampered ahead, and I slowly marched on, stopping often to catch my breath.

It was growing colder, so I took out my liner gloves. At times, I took off my pack to let my shoulders rest for a minute. Each time I started again, the first 3-4 steps felt okay. And then, every time, my legs turned to lead. Ugh! This was the most physically demanding thing I had done in my life! I wished people at home could know how hard I was working and how much I was struggling. I wished they could send some encouragement…
I asked a man who had already reached the summit and who was on his way back down what time he started. I then asked him at what altitude we were now at. He pulled out his GPS. “Do you really want to know?”
“Yes.”
I still had over 1000 feet to climb! This mountain was killing me. Every now and then, in between moments of immense struggle, I was struck by feelings of incredible happiness. “I love climbing!” I would think to myself. And I would stop and look around at the views in all directions, totally amazed and in awe. Then I would try to lift my legs of lead and take a breath with my heavy lungs and take another step. Just another step… Slowly, slowly…

The three teenagers turned out to be a part of an outdoor group, lead by an extremely encouraging and nice man, who amazed me with the amount of energy he had. His 11 year old daughter was hiking with them, and he would call out, “C’mon, love! You can do it!” I imagined that someone was also calling me “love” and encouraging me on, which helped me a lot. We were now in the rocky territory and found ourselves off the path, scrambling over small boulders and loose rock. I lost my balance a couple of times and nearly fell backwards! I wasn’t totally in control…
After several minutes, we re-found the trail and the leader of the group apologized to me for getting us off-track. They went on, and I slowly put one foot in front of the other, stopping often to take pictures of the incredible views. I lost sight of the group and could not see how far ahead the summit was. Ahead, a girl was sitting on a rock, not looking well. I think the altitude and all the work of climbing this mountain was really affecting her. Luckily, she had a guy to look after her.
Once again, I found myself all alone. I couldn’t hear or see anyone! I figured I must be nearing the top, though!
And then…at last, I saw a group of people! I had done it! I made it to the top of the mountain! Tears welled up in my eyes. I felt so much more emotion that I did when I reached the summit of Mt. Katahdin at the end of the Appalachian Trail. This was the hardest climb of my life (because of the altitude) and I did it all alone! (and completely voluntarily) 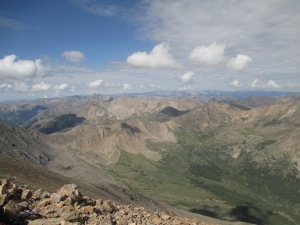 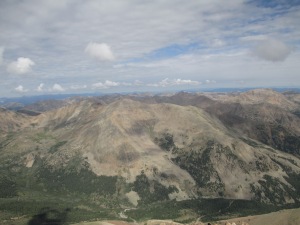 I asked the nice group leader if he could take my picture. He told me to “flex those muscles, girl!”. I told him how his encouragement to his group had also helped me, and that I was impressed with the amount of energy he had. He made a phone call to his wife and called her “love”, as well. (My kind of man!)

Two college guys had made it to the top from the south trail and were taking pictures of each other doing push-ups. When I saw that, I laughed, and remembered I had imagined people taking pictures of me doing yoga poses along the way, but had not yet had the chance. So, I asked them if they were willing. They were more than happy to oblige.

I continually put on and took off layers, texted a couple of summit pictures, chatted with the guys, and then, still wanting to linger, but also noticing the big black clouds coming in, I started down.

A lady who was climbing up, stopped to talk to me. When I told her I was thru-hiking (I was the only person climbing with a full pack), she gasped and said, “I want to touch you!”. She was so thrilled about what I was doing. (To me, this was just a baby hike…) She told me that her husband was riding in the Denver-Durango bike race, and she was out here to support him.
I passed many people who were still making their way up. I had reached the summit at 10:15 and started my way down at 10:45 in order to get to treeline by early afternoon to escape the storms.
I spotted a deer in a field as I got closer to treeline.

Once I was back in the woods, it began to rain and then hailed! I was glad I had made it through the exposed part. My stomach had been hurting on the way up and continued to hurt on the way down, as well (I later found out this is one of the symptoms of altitude sickness). My pack felt so heavy, and I had to stop often to give my shoulders a break. I felt so tired!
Once I reached the trailhead, I sat down and ate a snack. A father and his two young children came riding in on their ATVs. I pressed on, through the woods, headed towards Twin Lakes, where I would have to walk a mile off the trail to pick up my next resupply box. Part of me wanted to stay in Twin Lakes and watch the Olympics, but another part of me didn’t want to spend the money, knowing I would have another place to spend the night not too far ahead.
Three mountain bikers headed towards me and I stepped aside to let them pass. “Hey, Thank you!” the leader said to me with a nice smile. All three of them were cute. It gave me a boost! 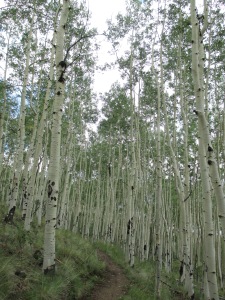 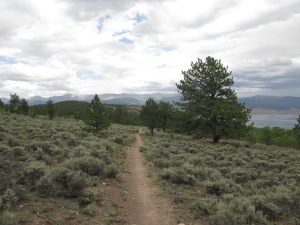 I reached the highway at 2:49 and headed towards Twin Lakes. Non-CT miles are so much harder! 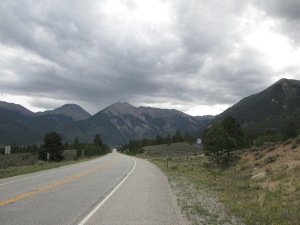 It took me 25 minutes to reach the store. I wished someone would take pity on me and pick me up, but no one did… The rain had started coming down again along the way. The Travel Lodge had a sign reading “No vacancy” and the Wind-Spirit Cabins were also full. My spirits sank. I was tired and down and did not want to walk back to the trail and camp.
Luckily, the lady at the store was nice. When I asked her for my box, she told me that I looked too pretty and clean to be a hiker! I told her I definitely didn’t feel that way… She gave me the number for a place to stay that was 1/4 of a mile up the hill. Luckily, they had a room for me! First, though, I had to sort through all of my food and resupplies again. I sat on the floor of the store and spread my things at. (This can be an overwhelming task…!). What do I need for the next section, what is worth the cost of mailing back home, and what do I want to donate to other hikers? An older man, who was training for a 100 mile trail race chatted with me as I sorted. He was impressed with what I was doing because, unlike him, I stay out in the elements, while he stays indoors each night, eats real food, and showers. He talked about the daily threat of lightening and I brushed it off. “You’re a trip!” he said. “Lightning doesn’t scare you!”.
I sent two small boxes back home (they didn’t have any postal boxes), and headed out in the rain to walk up the hill to my cabin. (I got a bit scared about what I would be renting based on what I saw along the way). A nice,older man greeted me and brought me to the cabins. He opened the door to my room, and I quickly scanned it, not seeing a TV. “Is there a TV in the main part?” I asked, sheepishly.
“You want to watch the Olympics, don’t you?”.
(How did he know?). “Yes,” I nodded.
He told me I was welcome to come over and watch them in his living room. I took a shower and was so happy to see that they had both shampoo and conditioner! I had noticeably lost a lot of weight already. I took out my contacts, ate a snickers bar, and then realized that I could make a pot of soup on the stove! (So convenient and civilized!). I checked facebook and sent out a few e-mails to let people know I was okay, then headed over to the man’s living room to watch the Olympics! His little dog kept climbing into my lap and sniffing me. His lady friend joined us and we all struggled to keep our eyes open until the end (I hoped I wasn’t keeping them up!). I was so tired that I wished I could sleep for 10-15 hours!

Around 2 in the morning, I woke to sounds of some kind of animal trying to eat the food in my ziplock bags! (and I swore I saw a medium sized animal dart across the floor! I got up, stashed all of my food back into my Ursack, and tried to go back to sleep. The animal(s) continued to make noises throughout the night! Still, it felt good to sleep in a bed.