I was hoping to be able to talk with my Swiss friend yesterday, but his busy social schedule wouldn’t allow for it. Today, he had to leave at 8am (my time) for a barbecue. Breakfast started at 7:30am. I needed to wake up early so I could talk with him and then get breakfast, but I was SO tired (as well as hungry)! I really needed to sleep more.
I finally woke up and called him. The conversation started out okay, but I ended up crying for awhile. The owner of the hostel (the same guy who had yelled at me the night before for lying on the couch) opened the door to my room and told me that breakfast was being served and that I needed to come upstairs. He asked if I was talking to someone on the phone and it blew his mind when I told him yes (I wonder what he would have thought if I told him I was talking to someone in Switzerland!). I was so tired, and so sad and ending the phone call was particularly hard. I made my way upstairs, got a piece of gluten-free egg casserole, a slice of watermelon, and a cup of coffee. I didn’t feel like chatting. There were still tears on my face, but Chad and Jasmine were at the table and they love to talk! I didn’t want to seem rude and interrupt them to get seconds, so I just nursed my coffee and listened to their stories. By the time I got to go back to the kitchen, they were putting breakfast away. I didn’t eat nearly enough.
I had to decide if I was going to spend another day at the hostel and rest, or head back to the trail. If we were checking-out, they needed us to strip the beds and give them their sheets. I asked for a half an hour to think. Downstairs, Chad, Jasmine, and Andrew were all busy sorting through their belongs and food. Stuff was all over the place! Decisions had to be made, and food bought at the stores had to be repackaged. And then, somehow, it all had to be fit back in our (relatively) small backpacks! Almost a miracle! It amused me to see the time it took others to deal with this part of the trip, and being with them calmed me down a bit. This was hard for all of us! I relaxed and chatted with them, wondering what I should do, and finally decided that if they were heading out, I might as well, too. I really enjoyed their company and didn’t want to be here without them. Before I packed up, though, I needed another shower! 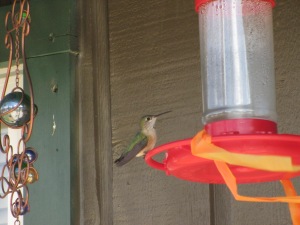 Hummingbird at the hostel!

The owner, Bill, drove Chad and Jasmine to their drop-off point, and Andrew headed to the post office to send his bounce box further up the trail and then hitch ahead. (I had given him some powdered milk and other things I didn’t need and he gave me some of his dehydrated strawberries in return!). I was left to wait until Bill got back. I tried to catch up on my journaling, but the longer I had to wait, the more antsy I felt. My hiking time was diminishing! Bill finally returned and I paid him for the stay, the laundry detergent, the breakfast, and he charged me $11 for the ride back to the trail and $5 for the ride in (even though Howard was already there to deliver the trail magic!).

At 1pm, Howard drove me back to the trail in silence. I thanked him and said goodbye, and began my climb. Soon after, I saw the bin of trail magic and pulled out a Hostess snack for later. (While it’s nice they put out snacks for us, coming out of town is when we least need extra food! I found another swing on the side of the trail and went to sit on it and relax for a bit.

After continuing on for a bit, a mountain biker approached me from behind. I stepped to the side to let her pass and she thanked me. I knew she was in the race (part of the reason I wanted to get back on the trail today was to be able to see some of the racers). She was wearing long, green socks up to her knees and her hair was in braids. Her gear was extremely minimal. The trail descended to a flat spot in the woods, and there was a wooden bridge nearby. I saw a bike and then saw the woman sitting beside the creek, filtering her water. I walked onto the bridge and said hi, excited for the chance to talk with her. I asked her where in the pack she thought she was. She had no idea (it turns out that she was the lead female). We chatted for a bit, and I didn’t feel like I was holding her back at all, since she was filtering her water the entire time. It was interesting for me to hear about what the race was like for them. She said she got most lonely during the dusk, and missed her boyfriend, but once it was completely dark, she felt okay again. I asked her if she hallucinated during the race and she admitted that she did. I told her about running into Chad and she said she would look out for him. She thought that what I was doing was cool, as well. She lived in Durango. Another racer from South Africa passed us as we talked. He didn’t need to stop for water. Since bikes aren’t allowed in the Wilderness sections of the Colorado Trail, the racers had to take detours on roads, and since I was headed into one of these sections, I didn’t know if I would have the chance to run into anymore of them again. I said goodbye, wished her luck, and continued on. 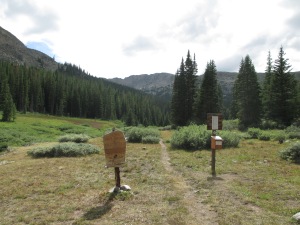 Sometime later, I passed a group of 5 guys who were stopped along the side of the trail. I didn’t know which way they were hiking. They weren’t very friendly. Most did not even say hi. I walked on, and started the climb. My breathing was labored and one of the guys (a college-age kid) passed me. I couldn’t even hear him breathing! (How is that possible?). I maintained the second position. At the top of the climb, he hopped up onto a large rock, threw his arms into the air, and let out a roar. “It doesn’t get better than this!” he said as I approached. (Personally, I’ve seen much better views…)
Realizing the opportunity to have my picture taken on the trail for the first time since the start, I asked the kid if he could take my picture. He happily obliged. “Love it,” he said, as I struck my poses on top of the rock. He told me that his group was hiking the trail one week per year. It would take them five years to complete. I was happy that I got the chance to hike it all in one shot. When I told him that I hiked the Appalachian Trail, he was completely amazed. I thought that was funny, since to me, hiking in the West seems much more grand and remote, with much higher mountains, but the Appalachian Trail seems to hold a certain kind of mysticism for people out here- most who have only heard stories about it.

His father approached the rock and we continued onto (what they thought was) Porcupine Lake (which turned out to be a dot in the distance!), where they planned to camp.

I had wanted to take a break there, but felt like I should continue on to have a bit of space. The father asked me if I was out here for “a college project.” (!) I told him, I had finished college a LONG time ago…
Amusing.
I found a nice rock to sit on and have a snack. 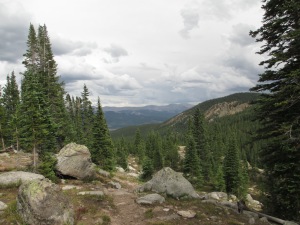 And then I continued walking.

After nearly 2 miles, I saw water and smelled a campfire! It seemed so homey- and so unusual! I could see the smoke as I walked further on, and then saw tents and a women and two younger girls cooking dinner. I had hoped to camp here, as well, but there didn’t seem to be any more sites left.

Dejectedly, I collected and filtered water from the lake and pressed on a little further, not knowing if I would find any suitable ground. The trail would climb for the next mile and then reach tundra again. I definitely needed to stop before treeline. There were no potential camping spots, so I just set up my tent on some plants in the woods, and took my food bag to the trail to eat some snacks. I checked my phone and saw that I had reception here! My “friend” from home had texted me, asking me where I was. He said to talk to him about gear. “I told you I’d hook you up!” So, I asked him if he would be willing to buy me some new crocs, since I wasn’t able to get them in Leadville. We texted for a bit, and I was happy to have some company. When someone shows you that they are thinking about you, at any time, it gives you a boost, but the effect is even more dramatic and appreciated when you are alone, out in the elements, and hiking all day long. It is so much work to do this! It’s so much harder in some ways than regular life, but also more rewarding in the end. However, it is definitely not like being on vacation. The physical level of exertion is strenuous, and constant, and any bits of encouragement along the way are immensely appreciated. (I tried telling this to a couple of my friends, but the message didn’t seem to have been received).
It rained throughout the night, thunder rumbled, and lightning struck in the distance. I was sleeping all alone, at an elevation of over 11,000 feet. Luckily, I didn’t have as many problems with water coming into my tent as I did two nights ago!