I had a very elaborate dream starting around 5-something in the morning, and I didn’t wake up again until 6:39- my latest yet on the trail! It was okay, though. I only had to hike just under 5 miles to get to the road that I would be hitching into town from. I ate a tiny bit while sitting in my sleeping bag and noticed that my hair was looking worse than ever (I had gotten my hair cut before I left for the hike and asked her to cut an inch off. She ended up chopping off 8 inches of my hair, with an even shorter layer all around my head!!! So bad!). But today, I decided not to care. No one was going to see me, anyway. I packed up all of my wet stuff, and started walking around 7:30. The miles were pretty easy, but I had to remind myself not to try to go too fast, as 5 miles was still a decent distance to walk. I made it to the first (small) highway, and then crossed the railroad tracks. 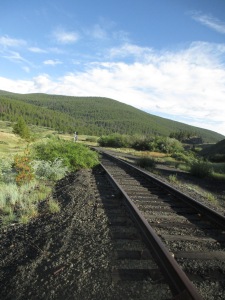 I saw a black Mary-Jane croc hanging on top of a wooden post on the other side of the train tracks! My first thought was that was someone had found my lost Croc and left it for me where I could see it! Then, I realized that didn’t make any sense, because I had lost it miles back. I went to take a look at it. It looked very small for being a size 7 1/2, and was a different style than mine, but what a miracle it would be if it were the opposite shoe of the one I still had! I took it off the post and set my pack down beside a large cairn of rocks to take my Croc out of my pack. It turned out to be the same foot as the other one. Too bad! Because my pack was off, I decided I might as well eat a power bar.
As I was eating, a cyclist walked towards me, crossing over the traintracks a few hundred feet above where the trail crossed, carrying his bike over his shoulder. “What’s going on?” he called to me in a southern accent. “Nothing…” (I never know how to respond to greeting such as ‘What’s up?’).
“This grass is wet. Now my shoes are wet,” he complained. I thought to myself, “if you were walking on the actual trail, they wouldn’t be wet!”.
I saw gear on his bike and asked him if he camped last night. “If you call 48 minutes camping, then yes.”
Knowing that the Denver-Durango bike race started that morning, I asked him if he was racing. He said yes, but I was confused as to how he could already be 140 miles into the race. He told me that registration was full when he entered, so he was doing the race on a time trial basis and started 2 days before the field. He asked me if I had seen another biker pass through this morning ahead of him. (I had not). He told me that he was chasing down his tracks and almost took me out when he saw me, thinking that I was his competitor. He complained about the heaviness of his gear and how it was slowing him down.
“Let’s have some fun,” he said, taking off his pack to let me see how heavy it was.
He told me that he didn’t have money to buy lighter gear, and that he ran out of gas money on the way to Denver and had to have his brother wire him money from Japan. He was going to try to make it to Durango with the $80 he had left! I was in disbelief. I asked him if he needed any water or food and he ended up taking some of my water (later, I realized this was probably against the rules of a self-supported race).
As he got back on his bike, he said, “I would stay and play, but I have my ego to stroke!”
He started to pedal away, calling back, “What are you doing here?”
“I’m walking from Denver to Durango!”
“I love you!” he yelled back. “What’s your name?”

He took off, and I walked on, thinking about guys and their egos. I wished I could tell him, “More heart, less ego…”
I walked through a meadow and heard a dog barking in the distance. I wished the owner would quiet him down! The howling had its own echo. Then, I saw the shape of a grey canine in the far distance and realized it wasn’t a dog making those sounds. It was a wolf! My very first wolf! Wow! As I walked on, I thought about the bike race . All of a sudden, a bird flew right next to my head! I couldn’t believe it! This was the first bird who was not scared of me at all! It flittered around me, hopping from branch to branch. I stayed, talking to him for a little while. 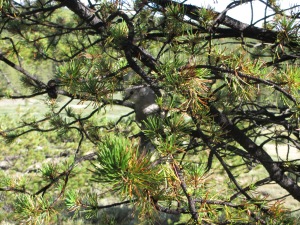 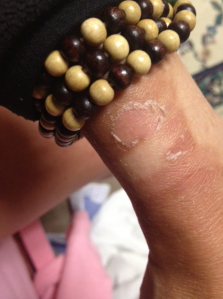