It started to rain around 4:20 am. Luckily, it was short-lived and not heavy. I’d been having terrible nightmares all night. Whenever I woke and returned to sleep, the nightmare would pick up where it had left off! (Awful!) In the dream, half of my school campus had been closed off and turned into a crime scene. One of the teachers had gone out into the woods around midnight the night before and was brutally attacked again and again. She refused to die, though. She returned to town in a ravaged, near-death state. I felt very scared and it was hard to shake off the feeling (especially being out in the woods, alone).

I got up at 5:55 and ate some granola pieces and a trail bar in my sleeping bag. It was cold- 42 degrees! By 7 am, I was packed up and ready to go. The big morning climb was not strenuous because it was spread out over so many miles. 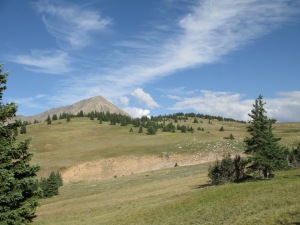 I reached the 11,800 foot summit, which was my first time above treeline, and planned to take a break there, but it was too cold and windy! Still, it was beautiful and I felt so happy to finally be out on an exposed summit! This is why I wanted to hike out here! 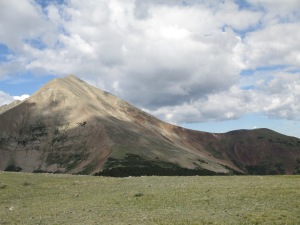 I put on my rain jacket and started the descent. About 8.7 miles in, I met a nice cyclist heading the opposite way. He stopped and asked me if I was having a good day! He asked me where I was planning to camp and told me he was set up 5 miles away. (I thought that was too early to end my day). He wanted to make sure I had enough food and water, and told me that the white van I would see was his in case I was wondering. He hoped to see me again later.
By the time I got to the river where I could fill my water, I was so tired! I tried to find a nice campsite area where I could eat my lunch, but ended up sitting on a log stump in not-the nicest area. I had peanut butter and honey on an english muffin, a little beef jerky, a little trail mix, and a snickers. I continued on and saw his white van. Then, I got lost! I couldn’t find the trail. ATV riders came roaring down the dirt path from the woods! I knew I was no longer on the CT! I kept walking, hoping there was an intersection ahead that would lead me to the trail, but I found nothing. I saw some trailer campers, but no one said anything. So, I retraced my steps. I realized that I missed my turn-off before the white van! The van had distracted me!
It was now 2pm, and I started another climb. As I crossed a road, a pack of cyclists came flying down and I almost followed them, taking the wrong way a second time! The CT crossed the road and continued into the woods. I managed to find my way, returning to my solitary trail. This was the toughest climb of the hike so far. It was hot, dry, and the incline was steep and unrelenting. I had to stop many times to catch my breath and take a moment of rest. Finally, I made it to the top of the climb. There were so many dead trees all over the ground! I guess it was due to the beetle destruction.

The trail was not well-marked in this area. I would come to forks, look at my guidebook pages, and receive no indication as to which way the trail lead! Luckily, at an intersection ahead, someone had hand written a “CT” and an arrow, so I knew which way I was supposed to go. I started descending the switchbacks. My pace considerably slowed. Several mountain bikers came whizzing by, and each time, I would have to step off the trail and let them go by. I had been unable to charge my ipod before this trip, rendering it useless, so I couldn’t bring it. That turned out to be a good thing, because it would have been dangerous to be on this trail with all of the mountain bikers flying towards you without notice, unable to hear them and quickly step aside! I sat down on the side of the trail for a break and checked to see if I had any cell service. I was getting exhausted. After finishing the switchbacks, a very outgoing cyclist in an orange shirt, in his fifties, came towards me, letting out whoops. “Are you all alone? Where are you going? You’re brave!”. In a loud voice, he shouted out, “This is a national scenic treasure you’re on! It’s way better than the PCT or the AT! You can see all the peaks!” I wanted to tell him that it was me and him, out in nature and that he didn’t need to talk so loudly. He started naming the peaks. “I’m sure you’ve researched them,” he added. (Actually… no, I had not…). “I hate the Collegiate Peaks!” he continued. “You know why? Because they are so dry!” I thought I was finished with the driest sections of the trail. I guess not… He then told me about a bike race that would be starting in another week, along the same route I was traveling, from Denver to Durango. He told me that the bikers camp along the way. that it is a self-supported race, and the first one to Durango wins. “I think you are going to enjoy it,” he told me. I was so exhausted… I had just hiked 20 miles and wanted to relax and rest. I didn’t have energy to create conversation. He took off and said he would see me in a little while.
At the next intersection, I sat down to rest. I had planned to continue on until I came to the next landmark- a set of power lines, but for some reason, I decided to look around the area. I saw some flat ground… Maybe I should camp right here! I set up my tent underneath some trees and went back out to the grassy mound in the sun. The temperature was in the 70s. It was warm in the sun, but cool in the trees where my tent was, and it was hard to know how to layer. I checked for reception and got a very faint signal. I didn’t feel like eating much. Another backpacker came around the corner. He was almost staggering, looked exhausted, and his face had a look of suffering. He gave me a slight wave, but did not really look at me. He just kept walking. Then I realized who it was! It was one of the 2 men I had met a few hours into the start of my hike, who so happily planned to hike to Breckenridge in 6 days! His more obviously out of shape friend was no longer with him. I looked at my watch and thought about him finishing in the dark. With so much suffering, I wondered if hiking this stretch in the amount of time he wanted to do it in was really worth it.
20 miles was plenty enough for me for the day. I rested for about 40 minutes, cleaned up, and then went out to watch the sun set for the first time on my hike. 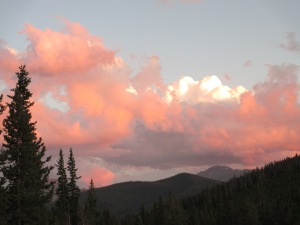