I woke up sometime after five. I checked my phone and found a message from my Swiss friend, telling me that the timing wouldn’t work out to talk, as he had activities planned from the late afternoon on. We were now separated by a time difference of eight hours and it was making finding time to talk even more difficult. I decided to try Skyping him from my bed, but it was a one way phone call due to the lack of reception in my motel room! He could hear me, but his voice was transmuted into that of an impossible to understand robot! I decided to get dressed, went outside, and walked until I got reception. I told him a little about my hike so far and showed him the dilapidated town I was staying in. I was standing next to a little shack with broken windows- a far cry from what he was used to seeing in Switzerland!

I got cold from standing outside, so I went to the motel office for a coffee and danish, put my hair up and contacts in for yoga, and went outside to meet Chrisselda. We had a pleasant ride over to the recreation center and even saw a fox in the field! The sky was unusually cloudy for a Colorado morning. Chrisselda introduced me to the lifeguard and to the yoga teacher, who was also named Wendy! I asked her how much the class was and she thought for a moment and then said, “For you, it’s free since your name is Wendy and because Chrisselda brought you.” My name was bringing me lots of good luck on this hike! And it was lucky that I arrived in town on a Tuesday night so I could attend the Wednesday morning yoga class! I weighed myself in the locker room and discovered that I had already lost a few pounds!

It felt so wonderful to be in a yoga room again, on a pink mat, listening to relaxing music. I couldn’t believe I had found myself here! I did a downward dog before class started, and as I lifted one leg into the air, a few other people in the room said, “wow!”. Eight of us took the class. We started with even breath (increasing the length of each breath), moved on to robin’s breath (something new to me), seated forward fold, and side stretching. Then moved to table top cat/cows, lifted one leg and brought it to the the opposite side, lifted and lowered it, and alternated several times. We then did high plank, downward facing dog to high plank, lowered halfway, upward facing dog, and downward facing dog five times (the second half of a vinyasa). She then pronounced us ready for camel pose, which I was a bit startled by, because that it a pose that should be done at the end of class, after a great deal of opening work. It suddenly made me thankful for my teachers who “smartly” sequence and for the passing of their knowledge to me. We continued with rag doll, warrior one to three and back (twice on each side), and then did splits (another pose we were not prepped for…). She kept calling child’s pose “bakatana” or something like that which always threw me. We did wild thing, turtle pose, side bends in a wide straddle, paschimotadasana, janu sirsana, a spinal twist, and savasana. During the class, Chrisselda would shout out her feelings. “I love you!” she told the teacher as we were doing camel pose. “I love you, too!” the teacher called back. It was amusing for me to hear people talking in a yoga class… Very different from my classes in Boston! Although I found the poses to be a collective hodge-podge, it was evident that the teacher had a lot of heart, and doing yoga always makes you feel good. As class ended, she commented on how wonderful the energy was in the room today. Chrisselda said that “Wendy brought it!” I thanked the teacher and gave her a hug before I left. What a nice experience!

Chrisselda gave me a ride to the post office, where I picked up my first resupply box. Along the way, she pointed out where the breakfast place was. She gave me a hug before parting. My hiker hunger was starting to kick in. I ordered a “mountain scrambler.” Unfortunately, I had an inattentive waitress, and I watched my breakfast sit on the counter for a long time before it was brought to me. (The cook was also getting frustrated about it not being delivered). By the time it was brought to me, it was cold. I thought about ordering some oatmeal after I finished my eggs, but it was 10:00 and I needed to walk back to the motel, get in a shower, pack up all of my stuff, and get out of my room by 11.

I gave the cleaning lady a tip, stashed my pack in the office, and walked back into town to mail my unneeded things home. I ended up getting lost and asked a little Indian girl where the post office was. “Look for the American flag. There’s one in front of every post office,” she told me.

I checked out the lunch options at the Java Moose, but didn’t find anything too appealing, so I headed back to the Burrow. I wanted to eat at one of the outside tables, but they were all taken. Inside, it was extremely crowded, stuffy, and hot. I asked if I could sit outside and was directed to a table occupied by a man. “Do you mind if I join you?” I asked. I ordered a buffalo burger and sweet potato fries and we chatted. He was here on vacation from Texas and intended to go fishing today, but the lake was dry. I told him what I was doing and that I needed to hitch back to the trail in the afternoon. He said that since his plans didn’t work out, he had free time and could drive me to the trail if I was ready! I had wanted to do some writing and order a milkshake, but decided to take him up on his kind offer instead. The trail was 20 miles away and it might not have been easy to find a ride! We stopped by the motel to pick up my pack and headed out. His name was Walt. We talked about hiking and GPS devices, and he pointed out a herd of antelope in a meadow. My first antelope!! I offered him some gas money, but he wouldn’t accept it. He gave me a half hug and I waved goodbye. I needed to put sunscreen on before I could resume my hike. It was now 2 in the afternoon.

Shortly into the hike, I met an older gentlemen who was headed in the opposite direction. His name was Oakley Westfield, but went by Graybeard on the trail. We had a nice chat. He told me there was a guy several hours ahead of me, who was planning to hike about 7 or so more miles to a campground. (“He’s young if that’s an incentive.”) I found it strange that a thruhiker planned to stay at a campground, and he sounded too ambitious and too far ahead for me to catch. I stuck to my own plan. The walk was pleasant- nice forest and nice flowers. I felt happy. I came into an opening after having just taken off my pack for a break, only to realize that I forgot to put my visor on (I hadn’t needed it in the woods). “I don’t want to take my pack off again,” I said aloud and then noticed two people lounging in the grass. “Where are you going?” they asked.
“Durango.”
“Durango? That’s that way,” the man said, pointing to where I had come from.
“No it isn’t. It’s that way,” I said, confidently pointing ahead.
They asked where I started from and were amazed. The man said that there are hardly any men who would do that alone, never mind women. They couldn’t believe that this was my first time in Colorado. 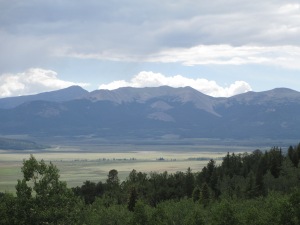 Later on, a nice girl on a mountain bike, who was headed the opposite way with her big dog stopped to chat with me. “Are you doing the whole thing by yourself?”. She said that she was scared to sleep out here. Her boyfriend makes her bring a gun. She makes her huge dog sleep in the tent with her. I told her that after you get used to it, you come to feel protected out here. She told me that there was a guy only a few miles ahead. “He’s 19. He does 25 miles a day. What you guys are doing is so far!”

The terrain was fairly easy throughout the afternoon and dotted with nice wildflowers. At mile 4.5, I stopped at a creek to fill up on water.

I continued on another mile and a half and started to look for a campsite. I didn’t see any, so I continued over the river, where I happily found several spots! There was even a fire ring. Unfortunately, the mosquitoes were out in droves. I set up my tent as the temperature cooled and wind picked up. I tried for quite awhile to make a fire, but only ended up getting a huge blood blister on my thumb. (I’m going to blame in on the wet sticks…) I made a pot of macaroni and cheese but had to keep walking in circles as I ate because the mosquitoes kept trying to bite me. I cleaned up and got in my tent at 6:21pm. It was still light out and I had time to journal. I wish I could have relaxed more in town. Hopefully, I will be able to in Breckenridge! Tomorrow, I have a 2,000 foot, six-mile long climb to 12,000 feet!