The landscape was revealed in an entirely different light in the morning, but was just as beautiful as last night. I was glad that I chose to camp up high. The wind was still active, but no rain had fallen during the night. I knew it was on its way, though! 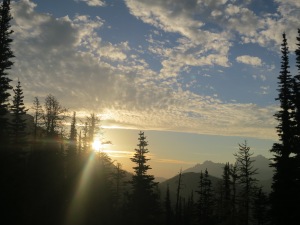 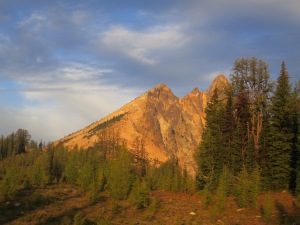 After packing up and taking several more photos, I began the long descent down. For awhile, I could see gigantic granite walls and peaks off to my left before reentering the forest. 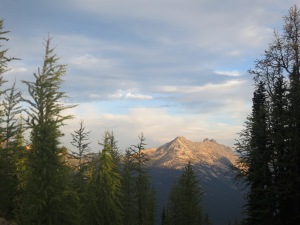 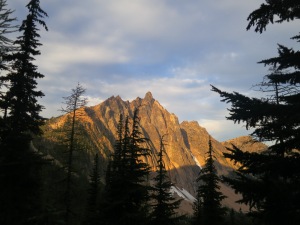 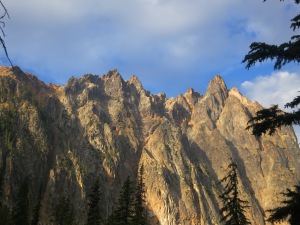 After a few miles, I encountered a man heading the opposite way. He greeted me briefly and kept going until I asked if he happened to have a weather report. He said that someone at Hart’s Pass had told him that a storm was coming today and that it would linger for the next couple of days. He also said that there was still trail magic at Hart’s Pass. After today, the guy planned on leaving, but this man informed him that most of the hikers were still on their way and he seemed to think he would stay. It seemed he was guaranteed to be there tonight, in any case. Then, he told me that it was good that I had beaten the stormy weather in Washington. He said he thru-hiked the PCT in 1981, but was prevented from finishing when he reached Rainy Pass because the snow came early that year. When I gave him a disappointed reaction, he said it was fine. He was able to finish it up another year. Although I hadn’t encountered any snow in Washington, I definitely didn’t feel like I had arrived before the stormy weather! I wasn’t able to see half the state because of all the rain!
I passed by the Methow River and campsites and then, a couple of miles later, found a nice little spot off the trail that had a bench to take a break at. Soon after, I reached Brush Creek, where I stopped to collect water before starting up the next 2500 foot pass. 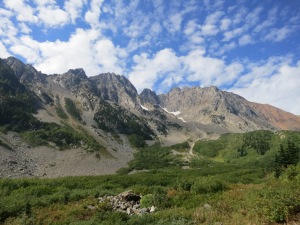 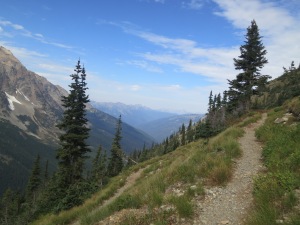 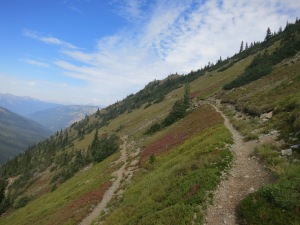 As I traversed the switchbacks, nearing the top, a man coming down informed me that there was a woman ahead who wasn’t doing so well. She was hiking with a big poodle and she seemed sick. She told him that she was going to try to make it to Hart’s Pass. He was sure I would catch up to her and wanted me to help her out. I wasn’t sure what I was supposed to do…
Once I arrived at the top, I found a little alcove to take a break and eat a snack. A man headed by in the opposite direction and waved.

I could see the line of the trail traversing the ridge as it descended slightly. Once I found myself along it, I had to carefully make my way around little washouts every so often. At each one, there was a mound of gravel that I had to slowly step over and try to avoid slipping. I wondered if these were the washouts everyone had been talking about. 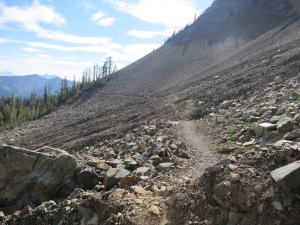 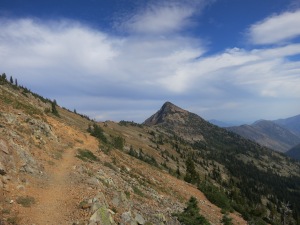 Once I reached another highpoint, I stopped to take a break. I had a little extra time if I wanted to wait for the trail magic at Hart’s Pass, so I unstrapped my folded up sleeping pad and rested on it for a few minutes. It felt like a luxury! When I got up, the wind suddenly blew it away! Oh, no! Not yet! I still had two more nights where I needed that thing! It had tumbled off the ridge, but was still on the slope. Carefully, I stepped down onto the silty clay-colored gravel and reached my hand for it. The wind blew it further away. At last, I was able to grab it! Second sleeping pad disaster averted! 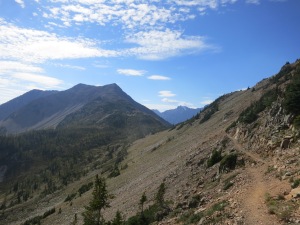 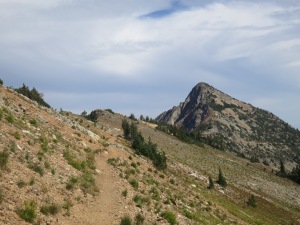 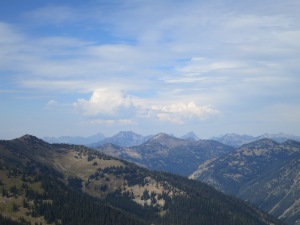 I continued on my way, feeling quite tired. Soon, I saw a woman heading my way. She introduced herself as Nurse Betty and told me that she was trying to hike the Washington section of the PCT this year. We talked about the oncoming storm and she told me to take my time with the washouts. I guess the ones I had just crossed weren’t the real ones. She told me that they were extremely frustrating and slow going, but that they were do-able. It had taken her 45 minutes to get through a 200 yard section of the trail! I was not looking forward to this…
The next few miles took all of the energy out of me. I tried to hold off from taking a break until I reached Hart’s Pass, where I imagined there would be a hamburger, but had to sit down along the trail and eat another snack for a bit of energy.

I could see some pavement through the bare trees below me and wondered if the trail would loop back around to it. I thought that was Hart’s Pass and looked for people hanging out. However, I saw no one and found that the trail turned away from it and headed in another direction. Soon, I saw a ranger, walking her dog, heading towards me. The dog wouldn’t stop barking at me! She struggled to pull it off to the side of the trail and quiet it down. Then, she asked me if I was expecting trail magic at Hart’s Pass. “I guess,” I said. She said the guy had left this morning and that there was nothing there. Part of me thought she might not know what she was talking about. Maybe he drove off to get something, but would be coming back. The man I talked to this morning said he would be there for sure today! As I walked on, any remaining energy I had left deflated out of me.
I finally reached Hart’s Pass and found nothing there but a man sitting in a rocking chair on the porch of the ranger’s house. “If you’re looking for trail magic, there’s nothing here,” he said. Great. I looked over and saw the outhouse and headed over to a picnic table. Maybe I would just cook some dinner here and take a break like I had planned and then get in a few more miles. Part of me didn’t want to be watched by that man, however. After I used the restroom, I decided to head out. “Do you know where the trail goes?”.
“No.” He explained the route and then warned me about the impending storm. “You don’t want to be caught up on the ridge in that. There are places to camp here.”
It was 4:30 in the afternoon. I am a thru-hiker… I wasn’t going to spend the night here. I thanked him and headed down the road. I found the path back into the woods and then came upon a little stream. I decided to sit down and take my break here where no one was watching me. I picked the most sugary things I could find out of my food bag and as I ate them, felt my energy increase enough to get moving again. The trail climbed from about 6,200 feet up to nearly 7,000 feet. I could see a bunch of horses above me near the road before I headed out into more open land. As I continued to climb, a couple who were out for an evening stroll passed by, headed back to their car and the safety of their home. I felt a bit envious. To my left, I could see the mountains that I had just crossed, and I could also see black clouds hovering in the sky above them. Although the sky was still blue above me, I knew I had to hurry. I started to sing the words to the Sesame Street song to help keep the stormy clouds away and the sky bright. “Sunny day, keeping the clouds away, On my way to where the air is sweet… Can you tell me how to get, how to get to Can-aaa-da?” So, the last word didn’t really fit. I tried different variations, but at least I was in a good enough mood to sing! 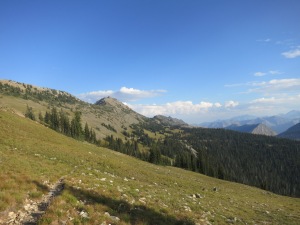 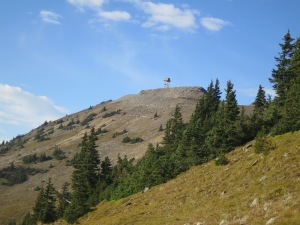 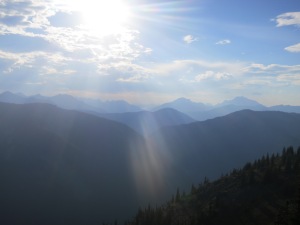 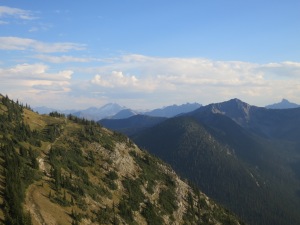 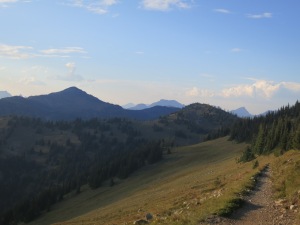 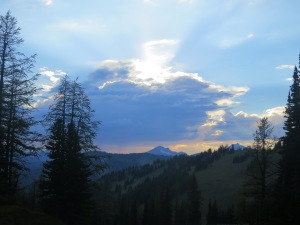 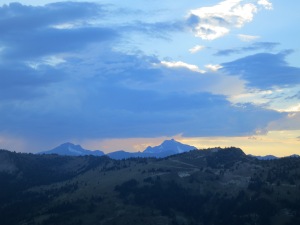 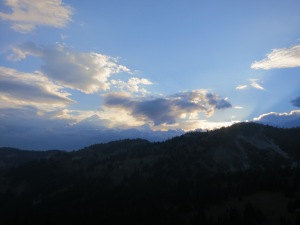 My goal was to get to the campsite at mile 2635.9.
As I headed downhill and came to a flat area, I saw a tent set up a bit off the trail. I continued past it and soon saw a little side path. I figured there must be a place to camp down there, as well. I could either stop here or continue to climb. I decided it was wiser to stop here and headed down to find a nice flat spot in front of a tree. I began the process of setting up my tent- staking it and re-staking it over and over. Somehow, it was much lower to the ground than it normally was! I continued to work at it and then couldn’t believe what it looked like when I walked around to the front! I realized my hiking pole that was being used as the support had collapsed and I needed to start the set-up from the beginning! It had to be set up properly as the rain was imminent! It was dark before I got inside and cooked my pasta dinner. By nine o’clock, lightning was flashing all around and the rain started to pound my tent. 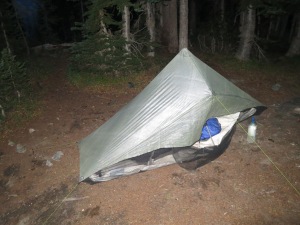