The kid never returned last night, but in the morning light, I discovered that I had slept right next to a mouse hole! I saw one scurry by my groundcloth and disappear into a hole right beside me when I sat up! With only 14.7 miles to hike before I got to High Bridge, I knew I could make the 3:00 shuttle. I still wanted to get going as early as possible to ensure I wouldn’t need to rush. I was now on the last 105 miles of my journey, which I almost couldn’t believe! It’s been long and tough and far more stressful than I ever imagined, yet here I am at the other end. I have fewer miles to hike than my first stretch from the border to Warner Springs (although much tougher ones)! Yesterday, I thought a lot about the 100 mile Wilderness and Mt. Katahdin at the end of my Appalachian Trail hike- the equivalent to where I am now on this one.

After I ate my breakfast and packed up, I headed back down the side path to the PCT, still unsure of what I might find on my way. Fortunately, I saw no fallen trees or crushed bodies. Although there were many small uphills sprinkled into the miles, I was generally descending about 4100 feet today. However, I discovered that it wasn’t going to be as easy as the profile made it look.

I encountered several more huge fallen trees over the trail which took a lot of extra time and energy to get around, and then realized I had to ford another wide river. I spent several minutes trying to figure out the best way to get across and ended up using a thin fallen tree, which made me nervous about falling off. My body was extremely tight and I had no agility left, and with my backpack on, it was easy to topple over. Somehow, I made it across, but couldn’t figure out where the trail picked up on the other side! I reached a dead-end and realized I needed to turn around. The extra minutes I had given myself were rapidly disappearing. I walked past a sign posted on a log warning not to camp in this area due to the falling trees, and again, was glad I had stopped where I did last night (although trees were falling up there, too!).

When I reached Cedar Camp after about five miles, I stopped for a snack break. I felt extremely tired.
The day heated up rapidly and my intestines were still acting up, which was frustrating. At one point, a brown animal caught my eye.

He was moving very quickly from a branch to the trunk of a big tree and would alternate between hiding and peeking out to look at me as I stood there hoping to get a better glimpse of him. I never figured out what he was. It looked somewhat like a marten, but bigger. I was thankful I got to see him, though!

Later on, I spent a few minutes watching a squirrel play on the trunk of a gigantic tree that
made the little guy seem so tiny! 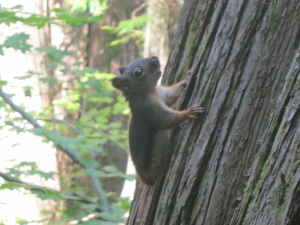 As the miles wore on, I felt more and more worn down. Suddenly, I came across a large group of people sitting on a rock. They all turned and looked at me as I walked by. One of them asked if was hiking the PCT and another asked if I knew Joat, who they were waiting for. I had never heard of him! They said they were expecting him at any moment. The one man in the group walked towards me and asked me something. I learned that this was Joat’s father and we tried to piece together where he might be. He told me when he had left Steven’s Pass, what color clothes he was wearing, and how many miles a day he was hiking. I figured the only way I could have not yet met him was if he started after me and was only now catching up. Some of the women came over and started asking me questions. One of them liked my skirt and wanted to know where it was from. She said I looked like I stepped out of a Patagonia catalog! Most of the group wanted to head back to the Ranger Station to get the 3:00 bus back to Stehekin, but Joat’s father said he would stay awhile longer to wait for his son and get the 6pm bus back. I thought it was so sweet for him to come out here and wait for him like that! And this guy had an entire fan club in addition!
The interactions helped give my energy a bit of a boost for the last several miles, but still, I felt very tired and dehydrated. I needed to take a couple more breaks. During one of them, the young kid that had walked away from his tent last night passed by with only the slightest acknowledgement! I watched him ahead of me on the switchbacks descending towards the Ranger’s Station. 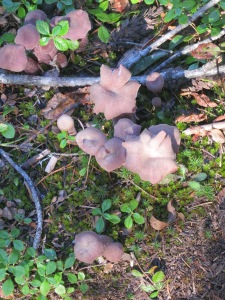 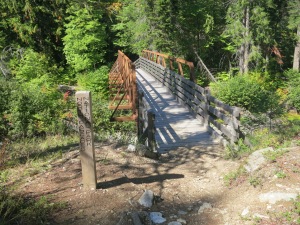 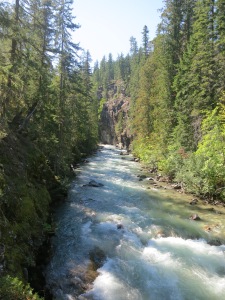 The little uphills thrown in zapped any remnants of energy I had. It took everything in me to get across the final bridge and reach the picnic table area. 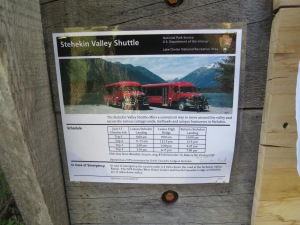