I barely slept during the night because someone had put their clothes into the washer, but didn’t get to dry them before I went to bed. I thought it was someone who wanted to leave early in the morning and would be mad at me for locking the door. I did get up around 6:30 to put the clothes in the dryer and start them drying, but the noise was too loud to sleep with so close to my head.

When I did get up, I walked into the kitchen, couldn’t find any clean coffee cups or coffee, and decided to go back to bed! In the few minutes I had left the room, the owner of the clothes had turned on the dryer. I decided to boil some water for my oatmeal and instant coffee. I asked when Kara was coming back and found out that she was gone for the rest of the day! How was I going to get back to the Chevron to get my other package? Someone said there was a list of trail angels on the wall by the phone. I saw three names and two clearly lived far away. One person was in Seattle. I couldn’t call someone who lived 60 miles away to give me a ride 2 miles into town! I called one number of a local woman, but she said she was going for a hike today and wouldn’t be back until the late afternoon. The call got dropped. When she called back, she asked if I was ready to go right now, as she was just heading out. I said yes! StoryTime also wanted a ride. I would just have to hang out for a couple of hours. When we got dropped off at the Chevron, our driver asked Dan, the owner of the Aardvark, if I could hang out with him. He said, of course! 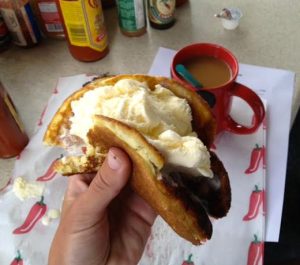 I got a nice cup of coffee, made from a French press and after looking at the breakfast menu, decided to order the bacon filled pancakes wrapped around vanilla ice cream! It was something I had never had before! StoryTime also sat in there and decided to get something to eat, after originally planning to eat at the restaurant attached to the Inn. He was also headed back to the trail today, but didn’t seem to be in a rush. A big series of storms was forcasted for the next several days. Everyone else back at the hostel was going to take another day or two off. I had no choice but to hike through it.
Later on, two hikers who had stayed at the Inn came in for breakfast. I recognized them from Independence- Split and Two Step. They were also going to take a couple of days off. Two Step was talking about a huge ford that would be dangerous with all of the rain. My eyes got wide. I kept my eye out for the postal woman, but she didn’t appear to be coming, even though it was well after 11. Dan said it was usual for her to be late.

At last, the blue van appeared and I headed into the Chevron with the signed form. “Are you Wendy?” she asked. “Thank God! Tell your friend that I want to ring his neck!”. John had shipped his package Fed-ex to make sure I would get it, not knowing that this wasn’t a real post office. She went back out to her van and brought in a large box for me. It was filled with food! Unfortunately, I couldn’t ship anything ahead. I shared some of it with her, as she was very excited to see what was in the box! Her son was in the Boy Scouts and did a lot of hiking and she said this was going to make his day! John was also kind enough to send me a warm scarf for the cold, stormy weather. Another lady came by to pick up her mail and somehow, she ended up bringing me back to Kara’s place. Dan had offered me his van, but I told him I was too afraid to drive it! We went to the wrong house, at first, but soon enough, I was back at the Mostel and had to start sorting through all of my things! I ended up having a huge box of leftovers that the other hikers picked through in a couple of minutes. They wanted to know why I had so much stuff!
A friend of Texas Poo had driven out from Seattle to take him back to his place for a night or two and said he could bring me back to the trail. First, we had to wait for Let it Be to get his stuff together. He couldn’t decide if he wanted to go to Seattle or stay here. The afternoon was ticking by, and my goal for the day had to be readjusted before I even started! Braveheart said, “You’re leaving us?”. I told him I had a plane waiting for me! (Besides, I wasn’t leaving anyone. I’d hiked the whole trail alone from the beginning).

We finally loaded up the car and headed out. Texas Poo said I should listen to heavy metal music to help me through the storms. He started making up words. “You’re gonna die! Slipping on scree…PCT!”. He kept emphasizing the dying part.
When we got out of the car and I showed him my pole that immediately collapses, he told me to duct tape it up. “That’s dangerous!”. It was dangerous. I didn’t have much duct tape left, which was why I hadn’t tried taping it before. I told him I would do it tonight. “You’re gonna die…!” he said again.
“No, I’m not!” I smiled.
Then, I started climbing.

I had a 2,500 foot climb to start off with. I was feeling good, despite my heavy pack, from my town interactions. Before long, I met a group of women, and they were full of enthusiasm about my hike. They told me that I looked good! I laughed a lot and definitely seemed in a good mood, which made me feel stronger. Awhile later, I met a man who asked me if I was hiking the PCT and then bowed down to me! I think that was definitely a first. He said he was now too old to hike the whole trail. Before he went on, he asked if he could give me a kiss. Since he was originally from Switzerland, I didn’t know if he was talking about a European kiss or an American one. He ended up kissing me on the cheek.
I continued on, climbing into the fog as the trail emerged from the woods. The I couldn’t see any of the views.

As I neared the top, I ran into another man headed down. He asked where I was going to camp. I didn’t know! I told him how far I wanted to hike, but he didn’t think I would make it! He said there were some sites coming up in a meadow and mentioned something about the cat walk being slow-going.
I stopped to look at the fog and clouds overtaking the sky as the sun started to sink. I could see the tip of a mountain, like an island in the sea. 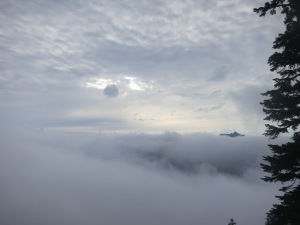 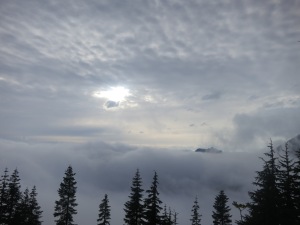 I hiked on, thinking about the cat walk. I liked the sound of that! I decided to listen to some music because that part sounded like it deserved some dancing! I enjoyed that part, but wished I could see the views! 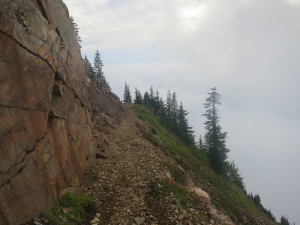 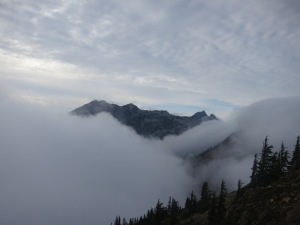 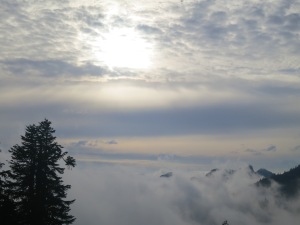 Later on, the sky got even darker, and rain started coming down. I stopped to take out my rain layers and quickly put my pack cover on. Here we go… The temperature had quickly dropped. I walked past a rocky area and heard the pikas making their sounds and saw a couple of marmots down below. They were awaiting the storm, too!

It began to get darker and darker and I needed to find a place to camp. I had passed the meadows a long time ago and was nearing my goal of 10 miles for the afternoon.
I spotted an area in the grass below the trail, and knowing that it was going to be a rainy night, set up where the ground was higher. I did my best to minimize getting my things wet while I put up the tent and then spread out everything inside, bundled up in all of my layers, including my new scarf, and cooked some dinner. I hoped I was set up well enough to avoid water rushing into my tent! All I could do now was wait!