I sat up in the dampness, stuck my jetboil outside of my tent, and started a boil for my coffee. Puddles of water surrounded my tent. At least I only had just under 11 miles to get to White Pass, where I hoped to get a room. The only buildings there were the Kracker Barrel store where I had my resupply box sent, and The Village Inn. Although part of me didn’t think I could afford the time to spend the night there, I fantasized about getting a room for the afternoon so I could take a shower, dry out my gear, wash my pot, and take a nap! There wasn’t even a restaurant there. If you wanted food, you would have to hitch 20 miles to Packwood, and I definitely didn’t have time for that!

I headed out back into the woods and soon began my next 1,600 foot climb. 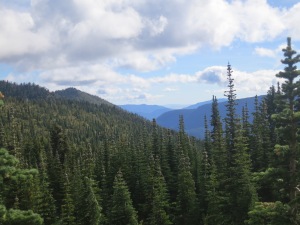 The higher I climbed, the more the clouds parted. I actually saw some blue sky! I was supposed to reach a spot where I would get my first view of Mt. Ranier, but the clouds were still too heavy on that side of the mountain and I couldn’t see anything. At the top of the ridge, I decided to sit down and have a snack break. I could see a shimmering lake below me and the bright sun had finally revealed itself, warming my body, and drying the outside of my pack. I could see the trail wrapping around the mountain and took a few minutes to absorb the beauty of my surroundings. 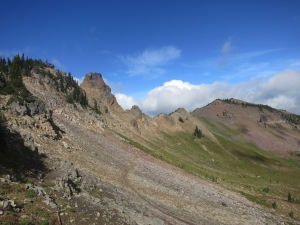 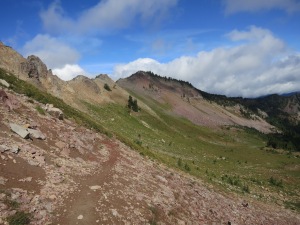 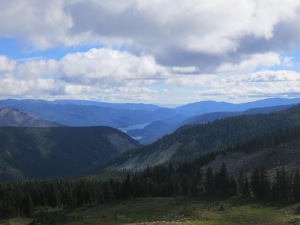 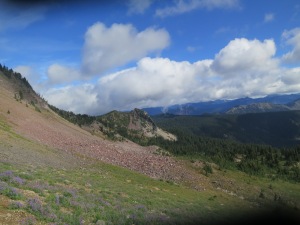 After continuing on for a mile or so, I encountered a day hiker on his way up. He commented on what a beautiful day it was. 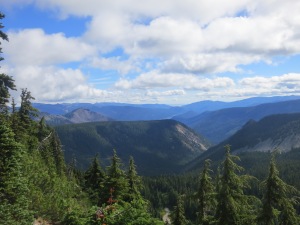 I then passed by the weathered and broken sign announcing that I was now leaving the Goat Rocks Wilderness. I knew I would have to come back and hike this section again in better weather someday. I descended back into the woods and ran into a nice female day hiker and her dog. She told me that they had had an unbelievable and very rare summer with no rain at all, and that it had suddenly turned into November-like weather in the past week. She found these weather patterns to be worrisome. She told me that she hoped to hike the entire PCT some day, as well.

Further into the woods, another day hiker approached, but he did not smile or acknowledge me in any way, which I found odd.
At last, I reached the highway and turned left. I crossed it and walked closest to the traffic that was going in the same direction as me, just in case anyone wanted to stop to give me a ride. There was a wide shoulder, and I didn’t feel like walking all the way over to the bushes, where the road was sloped. Instead, I stayed next to the white line of the second lane. All of a sudden, a van cut over and started driving directly in front of me, as if I wasn’t there! Umm… Excuse me! Can’t you see that I’m walking here?! I couldn’t believe it! I continued on my way and then, several minutes later, a huge semi trailer truck pulled up just behind me and started driving on the other side of me! What was going on? I was now walking between traffic on a highway! I guess I don’t know the rules about driving in Washington! In Massachusetts, people don’t usually drive on the shoulders!
I finally reached the Kracker Barrel store and saw a pack outside. I wondered who it belonged to. Once inside, I realized it was Story Time’s. I asked for my packages and then said I would return for them after I found a room. I walked up some steep stone steps and went by an entire row of rooms, trying to find the office. I then walked by the pool, down to a different building, and still couldn’t find anyone! Finally, after walking back up and walking through the building to get to the other side, I found the office. I went in to ask if they had a room and was met by a grumpy employee who looked like he was going to say no. He said there were a lot of hikers here and that all of the studios had been rented, but then came up with a last one for me! He took me to the room and asked if it was okay. I said it was perfect. I dropped off my pack and headed back to the store to collect my resupply packages. It turned out that the store sold some deli sandwiches, so I bought a turkey sandwich, bag of chips, and a soda for lunch. Then, I took out my damp sleeping bag and groundcloth and spread it out along my little outdoor patio. I ate lunch, took a shower, and started hand washing my clothes, as I started charging my electronics.

I wanted to leave around 4 or so, but the time flew by and I decided it would be best if I took advantage of what I had here and stayed the night. It would save me a night of setting up and breaking down my tent and I needed the time to dry out my clothes and sort through my food.
After I had paid for my room, the employee became very nice to me and every time I saw him, he asked if there was anything he could do for me. I returned to the store for a latte, and enjoyed some of the candy that Molly had sent to me, while I took my wet clothes to the other side of the building to try to dry them now that the sun had moved. When I went back for a second sandwich for dinner, I found Braveheart, Halfway, and another hiker eating inside. I said, “You reunited!” when I saw them. They were planning on heading back out to the trail in the evening. Before the store closed, the lady let us take any of the fried food that we wanted. The boys loaded up, but I didn’t find any of it appealing. I went back to my room, hung my clothes up inside, started sorting, and then went to dip my toes in the pool. I liked this place. When the motel guy came around again, I told him that I had some candy for him, if he wanted. He said the girls would enjoy it. I didn’t know who he was referring to, but assumed he meant his wife and daughters.
And then, it was time for bed! I hoped to get an early start in the morning!