It did end up raining, beginning around 3:45am. It got increasingly heavy throughout the night. I sat up a few times to see if water was coming into my tent, but it looked like everything was okay. I got up at 6:22 when it had appeared that the rain had stopped. However, it started right back up again! I ate my half portion of granola and my one poptart with my coffee and then got ready for the day.

During a break in the rain, I got out of my tent to go to the bathroom. Inger had woken up by then and I told her that the spaceship was still here! I broke down my tent, packed everything up, and said goodbye to Inger. I told her that I hoped to see her again, but we both knew it was unlikely. I thought it was strange that I hadn’t seen Puma. 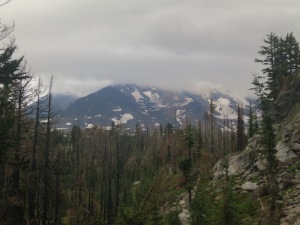 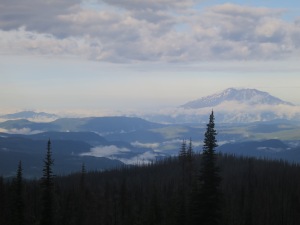 I continued the climb, getting glimpses of the big mountains in the distance through the burned trees. After a couple of miles, I saw the pond that Inger had mentioned (which was actually off the trail) and then crossed Riley Creek, where I collected more water.
After a mile or so, I passed by a section hiker and then forded a couple of rivers before meeting his partner, who was waiting for him at a trail junction. I was now at the base of Mt. Adams and the water I was fording was run-off from the snow on that mountain. I could not see the top of the mountain, however, as it was heavily obscured in clouds. 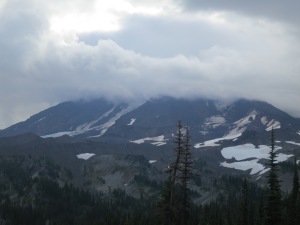 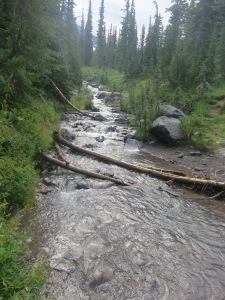 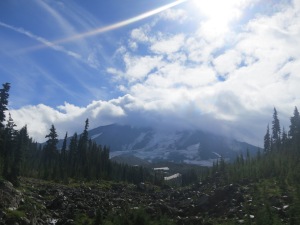 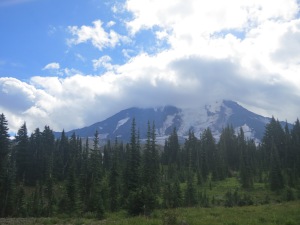 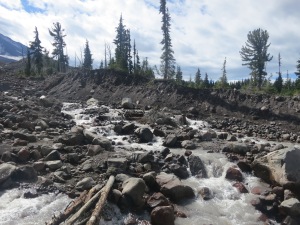 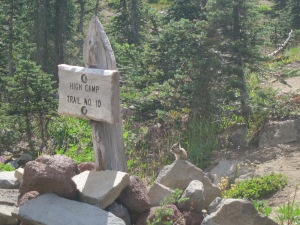 Around noon, I ran into two southbounders. The girl asked me if I was Wendy, which really surprised me. She said they had heard about me. I wondered what they had heard and from whom! She said that they had met StoryTime and he told them that I was close behind. They had started their hike northbound, but when they got to Sierra City, skipped up to the northern border and were now hiking south as they knew they weren’t going to beat the winter weather. I asked them if they had gotten caught in the huge storm that produced the washouts and they shook their head no. I also asked them if there was any snow in Washington. Dixie said there was only one section and that it wasn’t bad. 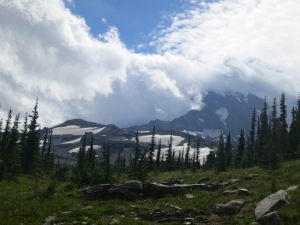 A couple of hours later, I reached Lava Spring where I found a hiker drying out all of his gear and eating lunch. He looked slightly familiar, but I could not place him. I apologized and asked him to remind me of his name. It was U-Haul, who hiked with Cowboy and Birdman down Kearsarge and who stayed at the campground with his girlfriend that night. He then remembered me and mentioned something about Mt. Whitney. “You were on top of Whitney with me?” I asked him. He was also flip-flopping and was surprised that the northbounders were so spread out now. He expected to see everyone he knew within a couple of days! He told me that he had run into Cowboy in Snoqualmie and Birdman a few days later. They separated after Birdman got giardia and needed to take a couple of days off. Because Birdman’s wife was going to come out and hike with him for a bit, Cowboy decided to keep going. U-Haul also told me about being right in the middle of the storm that caused the washouts. Lightning was striking all around him and everything he had on him was wet. He wondered what he was doing out there.
He asked if I had seen Babyface and Dixie and wondered if he would catch them today. I asked him if he had seen Whistler or Hooligan, but he hadn’t. He told me that I was the 40th thru-hiker that he had seen from the border, which I nearly couldn’t believe! Later, we talked about the upcoming sections. He told me that he hated the section between White Pass and Snoqualmie and that there was nothing to see there. I wondered when I was going to get to the good views that I thought Washington had!
My short break turned out to be a lot longer than I had intended due to all the talking. I finally got up and thanked U-turn for the conversation and then continued on my way. I still hoped to get in 11 more miles today! 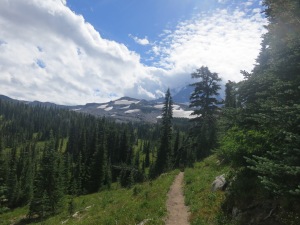 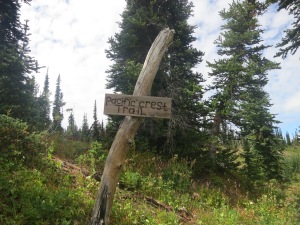 When I reached Midway Creek, I stopped to fill up on water, as it was supposedly the last source for a long stretch. I would have to hike the remaining 7 miles with a heavy pack! The trail climbed a little over 1,000 feet and at last, I entered the Goat Rocks Wilderness, which I was excited about. I remember Roadrunner telling Salty that this was her favorite section of the trail back in Lake Isabella. I tried to take a photo of myself by the sign, but no matter how hard I tried to smile and look excited, all I could see was the exhaustion in my face. 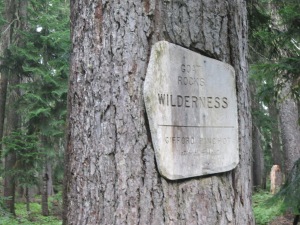 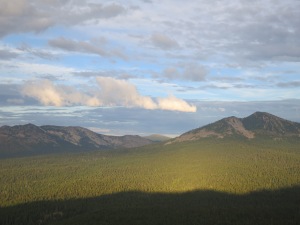 Today, I also felt like I was feeling hungrier than I had been, as well.
I reached my campsite at 7:26 and began to set up my troublesome tent. I was so tired!!