I had less than one mile to walk before I reached the 2,100 mile point! When I arrived, I found some disheveled sticks meant to spell out the number. I spent a couple of minutes fixing them, but they were so linear that the 2 ended up looking like a z! Oh, well… I continued walking along the foliage filled ridge and then made my way down to the highway, where I proceeded to get confused once again… I saw two men at their car preparing to start their hike and thought the trail must be close by. After several failed attempts and a lot of walking back and forth, I realized that I needed to follow the paved road for awhile. (If I ever hike this trail again, I feel that I will save SO much energy, knowing where it goes, for the most part, now).
Right before I arrived at the actual highway, I looked back to see two guys behind me. I thought it was the day hikers, but then realized it was Tumbleweed and Puma! Yay! Together, we found the trail and began the nearly 2,00 foot climb. Tumbleweed was on the lookout for a good place to stop for a snack break. I let them go on ahead, knowing the climb was long, and wanting to pace myself. I saw a small opening in the woods that gave a bit of a view and was surprised they didn’t stop there. A little later, I found them sitting on a fallen tree in the forest. “This is where you chose to stop?”. They said it was a nice log! I kept walking and said I would see them farther up the climb.
Before long, I got hungry and tired, myself. I found my own fallen tree to sit on and pulled out a Snickers and packet of almond butter. Then, I texted Connie. To my surprise, she said she was getting reading to head out! Nooo!! I was really looking forward to seeing her! She said she might still be there, but I had to hurry! I still had four miles to climb!
Along the way, I suddenly heard a loud voice singing and the strumming of a musical instrument. Two hikers appeared, headed southbound. I almost wanted to tell them that they were about to run into two other hikers with guitars. They could have a jamboree! But then, I decided to let the encounter be a surprise.
As the trail emerged from the woods out into the open, the walking got tougher. A gravelly sand replaced the compact soil beneath my feet and it was now pulling all of my energy downward. It took greater effort and more time to lift each foot with every step I took. 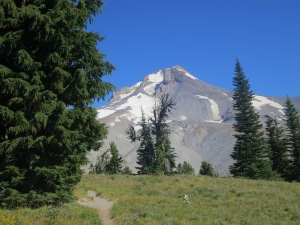 I kept plodding forward, checking my watch, and hoping that Connie would still be there. Mt. Hood now loomed in front of me and I kept stopping to photograph it. Pretty flowers of different colors dotted the forefront. 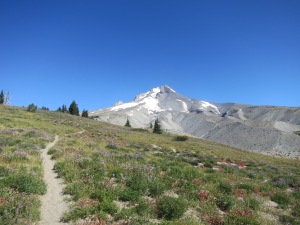 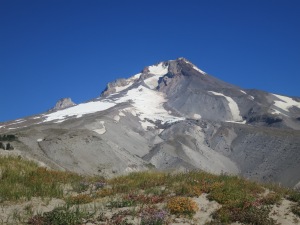 I was struck by the amazing red color of the berries on the bushes alongside of me. 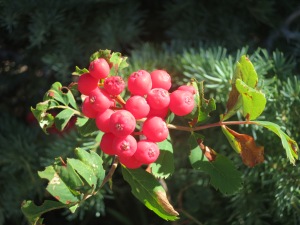 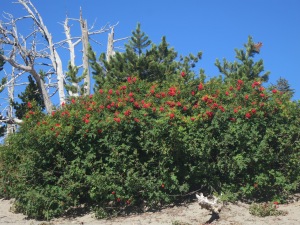 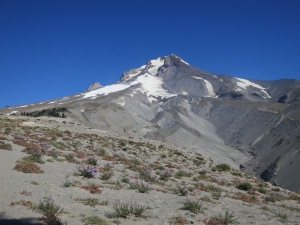 Slowly, I kept inching my way forward.
When I got my first glimpse of the lodge in the distance, I wanted to text Connie. “I can see it!”, but I decided not to waste any time stopping. I still had a mile to go. 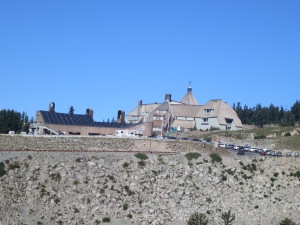 As I got closer, I met a woman on her way down the mountain. She asked if I was hiking the PCT and we chatted for a few minutes. She had stayed in the bunkroom with several other thruhikers the night before. She encouraged me to go to a clinic in Portland and told me that starting next January, everyone would be able to get free health care. Her son was now snowboarding on Mt. Hood and she had to hurry so she could get back in time to meet him.
I continued to climb. Soon after, I stepped to the side of the trail so four people could pass by, also on their way down. After they all passed, I looked back and saw the last person looking back at me. We both noticed each other’s packs! He asked if I was thru-hiking and told me that he had hiked the PCT 2 years ago. Then, he was the first person to congratulate me on almost making it to the state of Washington! 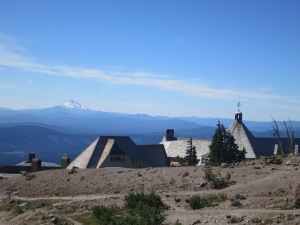 I kept my eye on the roof of the lodge. Then, the trail turned away… It seemed to take forever to actually get down to it!

When I did, I saw a backpacker outside. I thought it might be Connie and got excited. Then, I realized it was one of the “thru-hikers” that was hitchhiking around. My heart sank. I had trouble finding my way into the building, but finally made it to the main part. I looked around but saw no Connie. I texted her to tell her I was here and headed downstairs to check in. She said she was in the next building over, adding her extra food to the hiker box and would be over soon. My room was not yet ready, but they said they would give me a call when it was. I went to use the restroom and when I walked out, I finally saw Connie! I gave her a hug and we went back upstairs to find a place to sit. Puma and Tumbleweed arrived. We still had a half an hour before they started serving lunch. After only a few minutes together, Connie said she had to head back out. I was a bit sad about that.
I was able to get into my room and drop off my pack before lunch. It felt so wonderful to have some private space! Although the beds were twin ones, they were fluffy and high off the ground, and the bathroom was nice. I headed down to the lunch buffet and stood in line, waiting for the mozzarella salad, black bean orzo, pasta, ham, and an assortment of dessert pastries. Puma and Tumbleweed were sitting at a small table with StoryTime, who had also just arrived. There was no room there, so I just sat at my own table.
Drinks were not included in the price, but I decided to get a blueberry mint lemonade as a treat.

It didn’t take long before the pain started up again in my belly. I felt awful.
On my way out, I said hi to Puma and he told me about the jam session they had had with the two other guys. Someone had already told them about Puma and Tumbleweed, so it did not turn out to be such a big surprise, which disappointed Tumbleweed. I told them it wasn’t me! Then, I mentioned how the word “jamboree” had popped into my head, which greatly amused me. I told them I needed to go lie down because I was in so much pain! But first, I needed to go pick up my resupply box at the store.
They charged me $5 to hold it. I saw a tiny roll of Tums in the glass counter and asked the cashier how much they were. She checked and said $2. Two dollars? For that little thing? I said I would think about it. I bought a few postcards and headed back to my room, where I lied down in one of the beds before even showering! 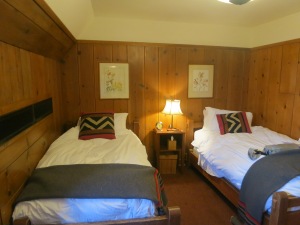 I eventually got up, took a shower, then headed down the hall and downstairs to find the washer and dryer. After I put my clothes in, I headed out to the pool. Even after hiking all of these miles, I still felt self conscious about my body. The swimming pool was too cold for me to want to go in, so I headed over to the crowded hot tub instead. I was so tired that I couldn’t even keep my eyes open!
I made my way back to my room, stopping to put my clothes in the dryer, and then decided it was time for dinner. There was an expensive option and an extremely expensive option. I realized that they make all of their money on this meal! I sat at my own table and looked over the menu several times. Nothing seemed particularly appealing. After I ate, and while I waited for my piece of chocolate cake and coffee, which took forever, I could no longer keep my head up and had to rest it on the table! It reminded me of my days in high school, where I was always in an over-worked and exhausted state. When I had a “free” 45 minute class period, I would go down to a basement carrel in the library to do some homework, always ending up napping with my forehead down on the desk. Within a matter of minutes, I would start dreaming.
After dessert, I went back to the dryer to collect my clothes and then returned to my room to do an initial sort of my food. I discovered that one of my socks was missing! Someone had taken my clothes out of the dryer and now I didn’t know where my sock was! This was a big deal as now I only had two pairs! Finally, I climbed into bed. The room was not at all soundproof and I heard employees walking up and down the hallways and then people loudly arguing above me, which made my body tense. Although it was a generally nice place, all of the noise and commotion made me long to be back out in the woods, where everything was much more peaceful.