Before it was light out, wile I was half asleep, I heard a noise near me. I thought it was probably an early morning hiker headed out on the trail. Then, I heard it again! This time, I knew it was too close to me to be a hiker! It was a large animal. I shifted in my sleeping bag and told it to go away. It did and then came back! I was too tired to look, but knew it was a deer. I decided that I better get up and eat my breakfast. A lot of moisture had condensed onto my sleeping bag and groundcloth overnight. I packed up my wet belongings and started walking in the overcast morning light.

After a few miles, I reached the Obsidian Falls area, where a unique kind of shiny, black rock could be seen along the trail. 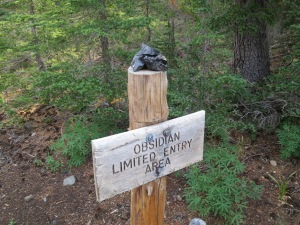 I had only previously ever seen this kind of rock in museums and enjoyed this section of trail. It ended all too quickly, however! I soon reached the Obsidian Falls, which were nice, but not remarkable.

I almost took a break there but decided to keep moving. I climbed the terrain above the falls and saw two men packing up their camp. As I headed on toward a tiny stream, I saw several other backpackers hiking down a different trail. They waved to me as I moved away in a different direction. I then started up a hill and found an open space to take my break. The sun had come out and I decided to take the opportunity to dry out my sleeping bag and groundcloth. 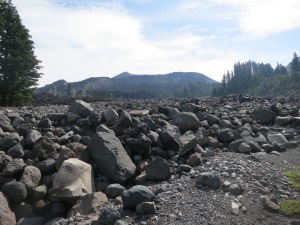 As I snacked, I watched a woman, hiking with her dog, study her map on a trail below me, and then head on. The two men approached and greeted me. I think they thought I had camped here last night. Once my gear was fairly dry, I re-packed my pack and headed out again. I walked by the two men again as they sat beside the trail taking a break. They now learned that I was hiking the PCT by myself (“You can’t do that!” one said) and asked me when I started. They said they had met a few others with similar start dates.
I continued on, feeling pressed to make it to the pass in time to meet my friend.
I passed by another man who was out hiking with his dog. I thought he was headed in the opposite direction, but then discovered he was going the same way that I was. He chatted with me a bit before I headed on. The landscape shifted into volcanic rock and my energy was fading. I felt so slow today! 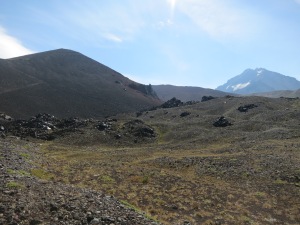 The trail climbed steeply and my breath became labored. This was hard work! I looked back and was astonished to see the day hiker gaining on me! That never happens! He ended up needing to stop to give his dog some water and asked me where I was from. I finished up the climb, followed the trail to the left, and never saw him again. 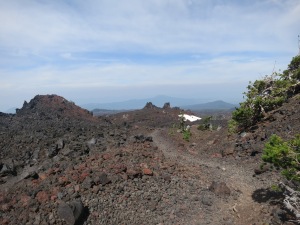 The trail descended back into the woods and I reached the supposedly always flowing Minnie Scott Spring. Another solo female backpacker was adjusting her pack on a rock just before the stream. I said hello and went to check out the situation. It turned out to be an extremely shallow stream, where finding a running trickle looked to be a difficult task. Hmmm… I headed back along the stream and collected what I could and then sat down along the trail in the grass to filter it. The other hiker still needed to collect water for herself, and we started chatting. She asked me about my two liter (gigantic!) collecting bag and a couple of other questions and I soon learned that she was out here on her first backpacking trip ever! She had flown to Portland from Houston in order to hike a 200 mile section of the Oregon part of the PCT. I thought she was incredibly brave to do this alone! After her first two nights, she was finding the solitary nature of the experience to be difficult. I told her that if she was near any thru-hiker and didn’t want to be alone, she should ask if it would be okay to camp near them and that I could guarantee her that 99% of them would say absolutely!
As I drank my ice coffee, and ate my Snickers, she headed back out. Suddenly, I felt like a good friend was walking away from me! I wanted to catch back up to her and keep talking! I finished my snack, filtered the rest of my water, packed up, and headed out, expecting to see her not too far ahead. I was wrong! The girl was moving quickly! A family of four walked by me and I continued down to a meadow. Two women were approaching me and in the distance, I could see my friend heading into the woods to start the next climb! The women wanted to chat, though. One of them asked if she could shake my hand when she learned I was hiking the whole PCT! I told her she was sweet. The other one asked if there was water at Minnie Scott Spring and how far they were from it. I headed on and eventually caught up to my friend on a climb. She immediately let me pass and I was disappointed that she didn’t seem to want to chat. Then, I started asking her questions. Was she going into Bend? She said she was not, since she had just started from there a couple days ago. I asked her when she planned on finishing at Cascade Locks. I was also curious about what she had done to prepare physically for this because she was definitely in good shape! She said she had been doing CrossFit. Later, she lamented about following the advice of an older man employee at REI when she asked what to wear on the trail. She said she felt dumpy, but I disagreed! I told her she was welcome to come with me into town if she wanted and that she would have a sure ride. She thought about it and then asked if I would be willing to pick her up a hiking skirt at REI if she gave me the money. I told her of course!
A bit later on, she said that she was thinking more and more about coming into Bend with me. I turned around and smiled. We calculated how many miles she would need to hike a day in order to finish when she planned to if she made this extra trip. It turned out to still be very doable! 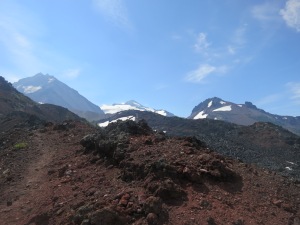 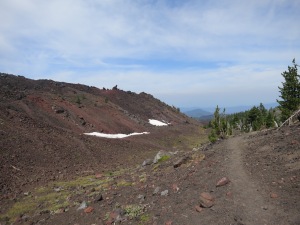 As we crested the peak, we met a group of women hikers who were very excited to talk to us. “Are you hiking the entire trail?”. They were blown away when I said yes and just as excited when Connie said she had just begun her hike two days ago.
After we left them, Connie said, “You must get that all the time!”. I told her I loved it!
I felt under a good amount of pressure to not arrive late at the road as I didn’t want my friend to have to wait for me. I told Connie I was going to pick up the pace, but that she should hike at a speed that was comfortable for her and that we would wait for her.
When I needed to, I stopped to take a pack break and a few minutes later, was surprised to see Connie approaching! She was an impressive hiker!
I stopped at the next lake for a moment and said that I wished I had time for a swim. She said I would have time later on, but I knew my schedule was too strict. We headed on and I again took the lead. I kept checking my watch and the miles I had left. I had not a minute to waste! I did realize that the stress I was putting on myself to get there exactly at 3 was a bit ridiculous. Surely, my friend would understand if I was a bit late…
The trail came out of the woods and headed across a maze of lava rocks. These ones were a bit harder to walk on than the previous lava field. I could see the road, but the trail kept looping around in crazy directions. I could see a stone tower by the road and people standing on top of it and I imagined my friend being able to see me approach from it. I also imagined that she was telling the other people about me and my hike and that they were all cheering me on! 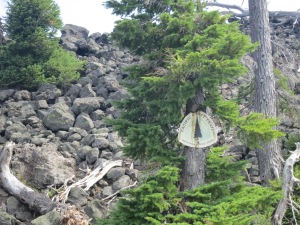