Someone walked by my tent at 6:43 while I was still in my sleeping bag. It must have been Purple Haze. I got up shortly after, ate some breakfast, broke down my tent, and packed everything up. I looked at my watch after I stepped back on the trail to find that it was now 8:08! Oh, dear! My starts were getting later and later and the sun was now setting earlier and earlier! 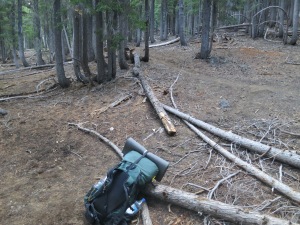 I continued the climb, looking down to see the now dreaded Diamond Lake below.

In just under three miles, I reached the Mt. Thielsen trail intersection. I got confused about which way to go, first heading the obvious way, then upon discovering that wasn’t right, bumping into a tent. Back and forth I went! Finally, I realized that the PCT headed in the complete opposite direction, where I hadn’t even noticed a trail! 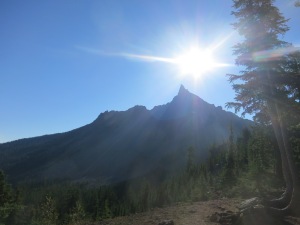 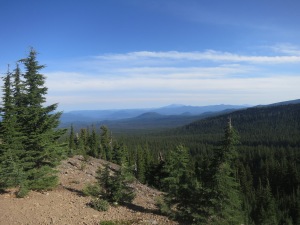 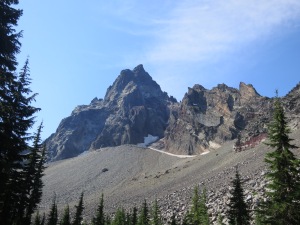 I noticed that I had a little reception here, so I spent a few minutes catching up on Facebook news, and then a hiker going south passed by. I stepped aside for him, slightly scaring him as I lost my balance in some rocks along the edge of the trail. My body had long lost any sense of agility with the increasing tightness I was forcing upon it. I headed down the other side of the mountain. The trail wrapped around and lead down to a beautiful creek!

It was an idyllic setting and I decided to take a break and enjoy it by having an ice coffee, even though it was a bit too early for that. I had only hiked five miles so far, but I needed to collect water and knew there weren’t any other sources coming up for awhile.

I kept looking back at the trail, expecting Tumbleweed to head toward me any moment, but was surprised that no one showed up!
The trail climbed gradually over the next five miles and I arrived at the sign proclaiming that I was now at the highest point in Oregon and Washington.

There was nothing remotely spectacular about the view. It’s interesting to me that snow remains on some of these mountains all year round, while it melts on the much, much higher Sierra mountains.
Just before I stopped for lunch, I saw a couple of hikers taking a break on some rocks along a ridge. The older man appeared to be on the phone, but the younger one waved to me. I found my own spot to stop a little farther ahead and they passed by and waved again as I was eating.
They seemed surprised when I caught up to them. They told me they were just taking their time. They asked me some questions about my hike and said that they had met a couple from Vermont who were also hiking the whole trail. I said I knew who they were- Lotus and Hermes. They never learned their names, but said that they had given Lotus their benadryl from their first aid kit after she was stung by a bee and broke out in hives. Lotus and Hermes weren’t carrying a first aid kit and when they saw the father and son, asked if they had one. It was another story about chance encounters and the incredible timing of them. I asked them where they planned on stopping for the night and they said they would be taking a side trail down to a lake. The only water sources in this section were quite a distance from the trail. One was a lake, and one was described as really gross small pools of water that were way off the ridge. My guidebook said that a trail angel kept a stock of water for PCT hikers at Windigo Pass, but I had read that he retired from trail angeling this year. I asked the father and son if they had seen any water there when they had parked. The son said he did, which made me happy. I had already decided to make the risky choice to bypass the water sources off the trail and hope for something there, but now my decision was solidified.

I continued on ahead of them, still needing to hike many miles to reach Windigo Pass. My intestines acted up again and I had to stop a couple of times to take care of them, as well as snack to pick up my energy. I reached the intersection leading down to the gross pools of water and decided to keep going. I still had over six miles to reach the road. 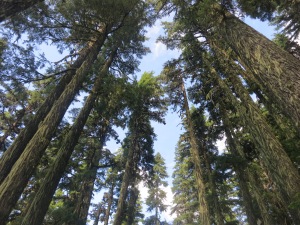 When I finally arrived, I found a bulletin board with a nice note on it for Wildcat and Baxter that was left by their friends Muppets and Stilts, but I saw no water. I walked across the road, looked around a campsite, and again found nothing. My heart sank. I knew I had taken a risk and this time I had lost. A car drove by and I looked at them, half hoping they would stop and offer me any water that they might have, while the other part knew that I had gotten myself into this situation, and I would need to take full responsibility. I headed up the next climb and soon after found a nice spot to set up my camp. It was now 7:33 and I had hiked over 28 miles! In the process of setting up my tent, a wasp found its way inside, and I could not get him out! I kept hitting the outside wall of the tent that he was crawling on, but that only made him mad. He flew to another wall and we repeated the process. Now, I had an angry wasp trapped inside my tent! No matter how much I opened the flap, he did not detect the outside! He finally positioned himself on the pole at the apex of the tent. I put down the groundcloth inside the tent with the wasp still there and then started throwing my various items inside. I didn’t hear him buzzing anymore but never saw him fly out. I used some of my remaining water to make dinner, cleaned up, and hoped I would have enough water to get through the next day.