I had a very tough time getting any sleep due to the pain in my stomach from the spaghetti. It was awful!
When the sun came up, I walked across the wet lawn and went inside to use the bathroom. Breakfast was not served until 8:00, so this was one day I could have actually slept in a little, but I was not able to sleep. When I returned to the lawn, I saw a curious deer checking out our tents! My sleeping bag was extremely wet from condensation. I pulled out my iphone and kept it close to me in case anyone happened to feel like texting me now that I had reception and access to electricity. Of course, they did not…
All of a sudden I heard a loud song blasting from somewhere. I recognized the voice as Christina Aguilera and then thought, “That’s one of my songs.” Only then did I realize that it was coming from my iphone! I shoved it further into my sleeping bag try to quiet the sound as I tried to mute it or turn it off, none of which was happening… How embarrassing! I hoped my neighbor Phil was able to sleep through it, or if not, that maybe he thought it was coming from a car on the road.

I tried to lie back down for a few minutes and then got up and started gathering my dirty clothes into a pile to take to the hiker bathroom. Phil beat me to it, however, so I ended up waiting. I looked through the register in the lobby and had a cup of coffee with Phil while we waited for breakfast to open. His wife was on her way from Bend to deliver his hiking poles to him, which he had forgotten. As we waited in line, a section hiker that had invited himself over to our table the night before, and who we both had a very hard time with, asked us if he could join us for breakfast. We didn’t feel like we could say no. My mood shifted. We gave the waitress our tickets for the pancake breakfast for which coffee was not included. We were supposed to get a fruit cup with it, but somehow our waitress did not know about this. Wight arrived straight from the woods and sat down next to me. As I ate, my stomach hurt more and more. I had to excuse myself for the bathroom a couple of times. Wight said that it was probably from overeating, but I had eaten a very ordinary amount- both at dinner and breakfast, and the pain I was experiencing was something very different.
I now how to attend to the chores of laundry, drying out my sleeping bag and groundcloth, and sorting through my resupply. I had a mountain of food in front of me and thought I was going to have to leave a great deal of it behind until the owner said I could mail some of it ahead. He said they could take the box to the post office for me! Wight asked to borrow my phone to call his son and then wanted me to join him for lunch. My stomach was still feeling awful and I needed to finish sorting.
Phil’s wife had arrived in the meantime and he had finished his own sorting and was now heading back to the trail. His wife asked me if I wanted a ride, but I was not yet ready. He thought he would see me soon.
I wrote a short blog update, a few postcards, and finished all of my sorting and packing. The woman at the front desk knew nothing about shipping a box out, so she went to find the owner’s wife who told her she would take my box to the post office for the amount of postage plus a $5 fee. I asked if I could include my stamped postcards and she hesitated and told me there would be another service charge for those. Are you kidding me? This place was all about making money!
Although I was still making trip after trip to the bathroom and the pain was not subsiding, I decided to have lunch anyway, since that seemed like a normal thing to do. 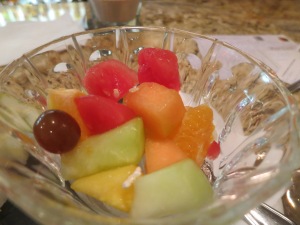 Hiker after hiker was streaming in. The Germans arrived and happily toasted each other at the bar. StoryTime arrived and called my name. I told him I was not feeling well.
Finally, after 5:00, I was ready to head out. Most of the hikers had gotten a ride to the trail head, bypassing a couple mile section of trail. I decided to hike back the same way I had come in- up the hill of the side trail and then through the forest. I hoped I could hike off the pain. 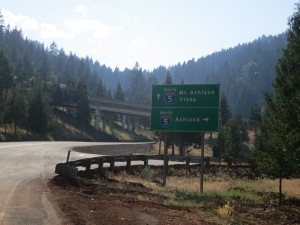 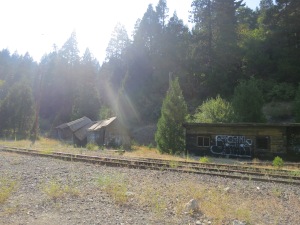 I passed a couple of day hikers and then ran into a couple more on the trail across the road who asked me how far I planned on going tonight. I told them that I didn’t know. I was just going to hike until it got dark.

When the light started to fade, I saw no apparent places to camp. I was in the middle of woods with sloped terrain filled with brush on both sides of the trail. I looked below and thought I saw a flattish looking place so I decided to head off the trail. I could hear what sounded like a loudspeaker in the distance and a voice that was saying, “Down with hikers. Hikers get off the trail.” It was a bit eerie. I searched the area for a place to lie down and finally picked a spot. Instead of making pasta, I made a cup of ginger tea and ate a few snacks. My stomach was still in great pain. The words on my teabag read, “Travel light, Live light, Spread the light, Be the light.” I found them to be very appropriate.