My spot on the back lawn of Alderbrook Manor was probably the most peaceful and beautiful place that I had camped on the PCT. It would have been nice to sleep in a bit, but I had to go the bathroom, and I didn’t know what time FunSize was getting up and wanted to go to breakfast. I headed over to the bunkhouse, past all of the sleeping hikers, and was surprised to find Braveheart still in bed and FunSize asleep! Why was I the other person up? I sat down in a chair inside the bunkhouse and started to compose a small update to post while I waited. When FunSize woke up, he looked down at me and said, “Good morning, Wendy!” with a big smile. After he showered, the three of us got on bikes to head downtown. Two mountain biking guests were getting ready for their long ride. We all started out around the same time and I soon found myself trying to match their pace! My competitive spirit was already coming back on my second attempt at riding a bike! I was the first to arrive at the diner, where I had another omelet, toast, and fruit.
On the way back, I saw Veggie relaxing outside a coffee shop, reading the newspaper. I wished I could have stayed another day here, but my schedule was too tight to do so. Having arrived on a Sunday, I did not get to visit the old fashioned soda counter or swim in the pool, as they were both closed. Back at the Manor, I was enlisted to find out about a ride back to the trail. Dave wanted to give Fred some time, so we agreed on 10:00. I went to pack up my things and took two minutes to lie in the hammock, which felt amazing! I decided that I want one of my own some day. 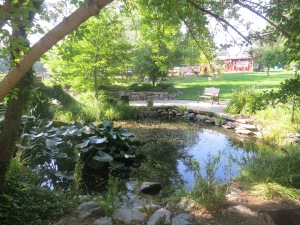 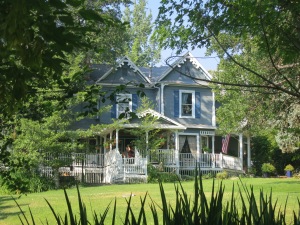 Lots of hikers congregated in the front yard, anxious to get back to the trail. I filled my water bottles as Cookie and Braveheart played with the dog, and Shyshinka took photographs of everyone. Braveheart then decided he might as well make use of the waiting time by eating a giant bowl of Lucky Charms. When Fred’s truck pulled up, FunSize started feeling sad about us all leaving. He told Shyshinka and I that seeing us makes him feel happy! Shyshinka was planning on doing 30 miles today in order to make it to Ashland before the post office closed on Friday, and FunSize worried that he would never see him again. “Don’t say that!” I said. I knew that would not be the case. (And if it were, it would be too sad!). 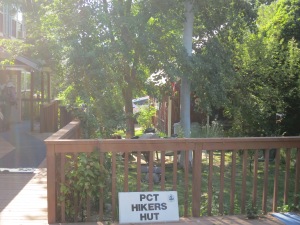 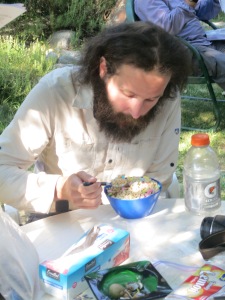 We threw our packs in the back, found a spot in the truck, and waved goodbye to FunSize.
When we arrived back at the Etna Summit trailhead, there was a feeling of excitement and happiness in the air. No one was in a rush to get hiking. I kept thinking, “This is so much fun!”. Sometimes, the right mix of people come together and the energy of a place is really positive. Etna turned out to be one such stop.

I took the lead until I had to pee. Since everyone was fairly close together, I had to wait for them all to pass by. 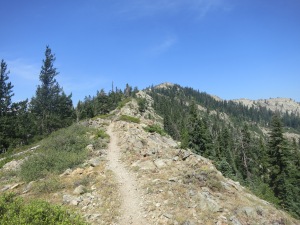 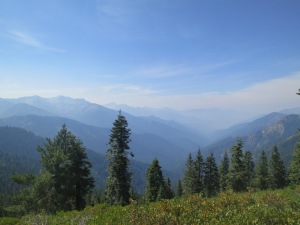 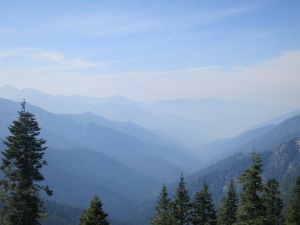 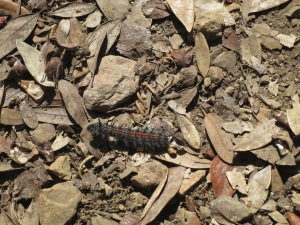 I kept my mind amused with things that happened in Etna, such as Shyshinka’s story about taping up his ripped shorts, which led FunSize to stand up on the couch and impersonate Michael Jackson and me to start screaming with laughter. In a couple of miles, there was a trail register and I waited for Cookie and Elk to sign it before sitting down to read through it. 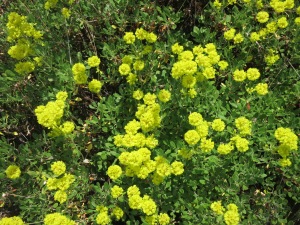 I later collected water at a cow-infested stream to make myself an ice coffee and chat with Elk. The water was not cold enough for it, though. My intestines were still problematic, but my mood was good. Elk started hiking before me. 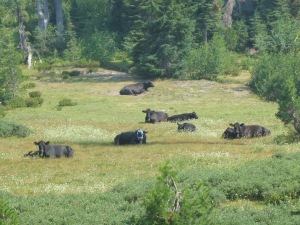 I later caught up to her at a pond. I took the lead and, towards evening, when I reached the last stream of the day, sat down to collect and filter water and eat a snack. 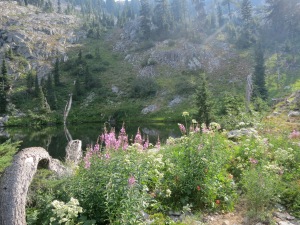 Elk came along, hoping to get in five more miles to camp where Cookie was planning on getting to. I knew I wasn’t going to be able to hike that far before dark.
The trail climbed and I met two section hikers headed south. They planned on hiking to Sierra City. 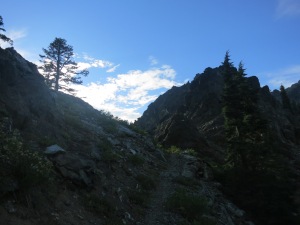 As the sun went down, I found a nice flat spot that was perfect for one person alongside the trail. Everything was well. Today, I loved the PCT and didn’t want this hike to end!