I got up around 6:45 and was walking by 7:55. I only had 5.4 miles to hike before I would reach one of “the best swimming holes on the trail” according to a former hiker. Maybe this would be my chance! It was hot out, and so far, there was no one around me.
After my first couple of miles, I reached a huge dam with water gushing out of a pipe with tremendous force! 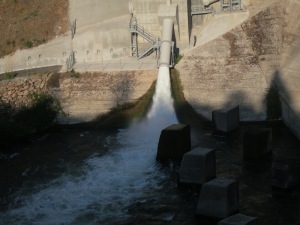 A stream of bikers were making away across the bridge on this Saturday morning and I wondered if I had stumbled upon a race. Once I reached the bridge myself, I had no idea which way to go… Did the trail go across the bridge, or should I follow the road in the direction the bikers were headed. I chose their way first and then stopped to check my GPS which showed that was not the right way. A biker called out, “Where’s your bike?”.
Ummm… where is your pack?…
I crossed the bridge and headed uphill, stopping to notice the pink flowers that my Swiss friend had told me were named after Mendelssohn. 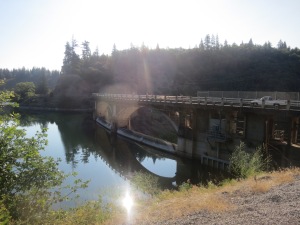 When I reached the bridge across Rock Creek, I thought I heard voices, and felt disappointed. I had really hoped to be alone.

However, I didn’t see anyone. I carefully made my way down the bank and saw a fold-up camp chair under the bridge, which I first found to be creepy. 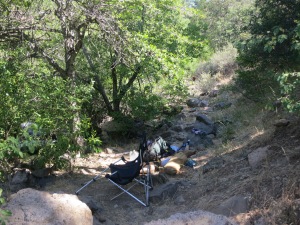 I couldn’t tell if anyone was around, but after several minutes, I finally relaxed a bit and figured that I was the only one there. I walked down to the water and after looking at the water for a couple of minutes, decided I didn’t feel like going in, after all.

It was much cooler under the bridge and I decided that I would be happy just sitting and listening to the water as I enjoyed some snacks. I wondered for several minutes if I should make myself an ice coffee as an additional treat and finally decided to collect some water, filter it, and do so. My powdered milk wouldn’t dissolve, but I still enjoyed it, feeling completely content, not wanting anything more than what I already had. This is one of the best feelings possible.
Above me, I heard footsteps heavily stomping on the bridge. I looked up and saw a hiker looking down, but he did not wave to me or acknowledge me, which I found strange. I packed up my foodbag and 2 and a half liters of water and headed back up the bank, over the bridge, and up the next big climb of over 2,000 feet in the heat of the day. At least I now had a little extra boost from my second coffee of the day, as well as my delicious chocolate snacks! 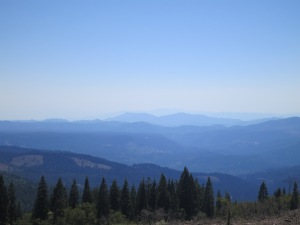 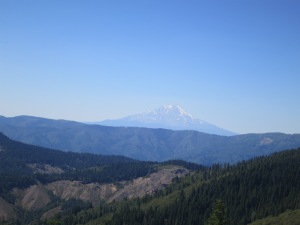 Eventually, I reached a dirt road where I saw a passed-out hiker sprawled out on the ground. I quietly made my way past him and then saw E-Path and Forget-me-Not sitting in a ditch along the intersecting dirt road! I wasn’t in a mood to socialize, so I started my way up the next climb. Part way up, I heard the sound of running water below! I had just walked by a running source of water! I thought about going back but figured I had enough water on me and just continued up the hill. It was now 97 degrees out. Luckily, there was more tree cover than there had been the past couple of days.
In a little over 4 miles, I reached the path to Clark Spring. A hiker that I had never seen was on his way out as I walked towards it. The water that I had been carrying for the last 12 miles was now boiling hot, and although it took awhile to filter several liters of water here, I was so happy to find the water nice and cool!
It was now a few minutes after 5 and I had only hiked just under 18 miles for the day! I was hoping to get in at least 7 more. I was so tired, though! The miles seemed to drag on and I had to stop often to give my shoulders a break. 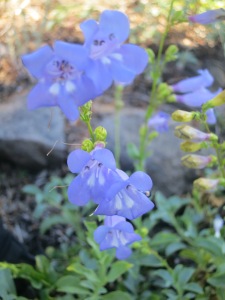 At 7:38, I saw a flat camping spot along a bend in the trail with pretty pink flowers nearby and an open view. I had planned on getting further and there was still enough sunlight to continue walking. I hesitated and then decided to make a compromise with myself, as the site looked too good to pass up. I would just have to get up early the next morning to make up for the distance I had lost by stopping early tonight! I spread out my groundcloth and sleeping bag and then boiled water for dinner, taking pictures of the setting sun, and washing the dirt off my legs, as I waited. 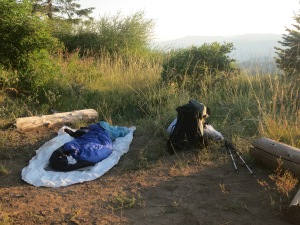 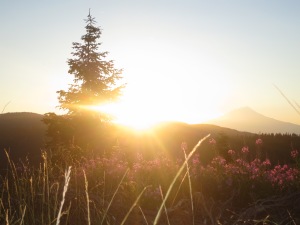 As the sun lowered and the glare lessened, I was stunned to see an incredible view of Mt. Shasta that I had been unable to see when I first stopped! Holy cow! Although yellow jackets buzzed around my stove, garbage bag, and food, joining the flies and mosquitoes that were interested in my body, I was glad that I had chosen to stop here. 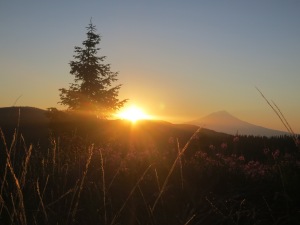 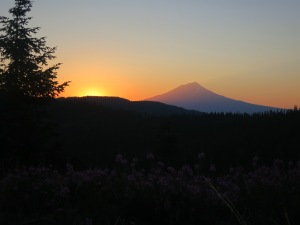 No one else passed by, and I enjoyed the solitude and the changing colors in the sky as the sun disappeared behind the mountains. 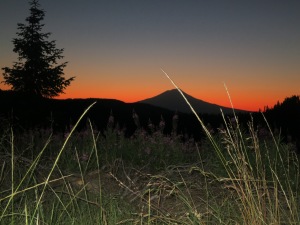 When I got into my sleeping bag, it was 67 degrees out and the wind was starting to pick up. A few minutes later, I was startled to see the temperature had risen to 72.6 degrees! What was happening?
Tomorrow, I would need to hike 28 miles to make it off the switchbacks and into Ash camp. After reading that the hitch into the town of Mt. Shasta could be a time-consuming one, I hoped for an easy hitch when the time came!