The girls got up before I did, seemingly as happy and energetic as they were the night before. While I got ready, two male hikers passed through and waved- Ole and Veggie, who I had last seen in Sierra City. I enjoyed a few minutes to myself after everyone had left and then continued the descent toward Highway 36. 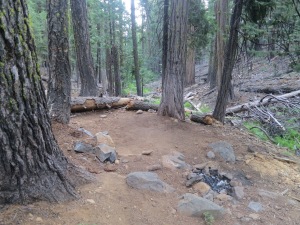 I was glad that I had stopped where I did last night, because there were no camping spots in the mile or so afterward. It was another very warm day and I had to stop to put sunscreen on once I emerged out of the woods.
When I reached the road, I was surprised to see Ole and Veggie there! They seemed to be lounging around and not actively hitchhiking. I greeted them and they informed me about some trail magic across the road. They seemed surprised that I wasn’t going into the town of Chester, like they were. I found the coolers depleted of food, except for a few cans of beer and some rotten bananas. Oh, well. There was a couple camping right next to the coolers. It didn’t seem like they were thru-hikers- awake, but still in their tent at 9am. 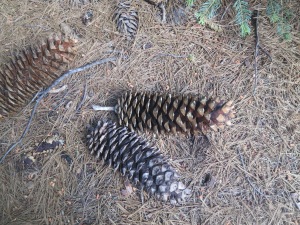 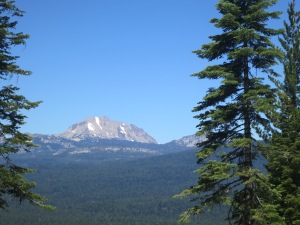 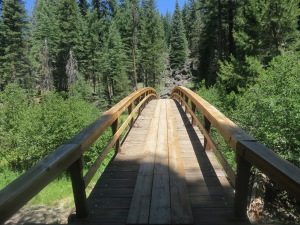 By mid-day, I had reached the bridge across North Fork Feather River and found a partially shaded spot to have some lunch. Not long after I got going, I ran into two ladies heading in the opposite direction. They were impressed that I was out here alone. One of them told me that I should enjoy the hot spring pool coming up at Drakesbad, but I told her they were not allowing hikers to use it any longer. She thought that was ridiculous and very wrong. The management had changed this year, and while for many years, it had been an extremely friendly place toward thru-hikers, this year was quite the opposite. As I walked on, I hopefully imagined that maybe those ladies would drive over to Drakesbad, be there when I got there, and convince the owners that I should be allowed to use the pool! I still had nearly 10 miles to get there.
I climbed a little over 1,000 feet and then reached a side trail, leading to a small geyser. I had never seen one before and it was supposedly worth the extra distance. A little way down, I dropped my pack under a tree. I don’t know who did the measuring of that trail, but it seemed much, much farther than 0.2 miles! The path descended for awhile and then turned right. The farther I went, the more I wanted to turn back! Finally, I saw some smoke! I walked closer and felt the heat coming off the rocks. The running water was steaming. It was interesting to be there, but I wish there was someone around that could tell me more about it. 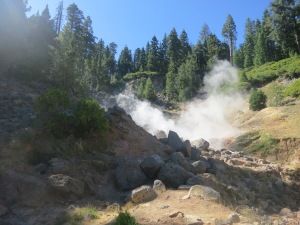 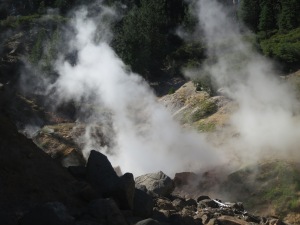 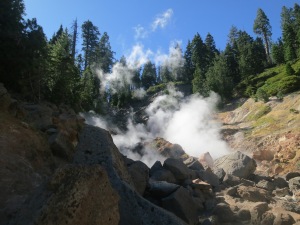 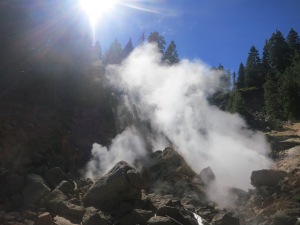 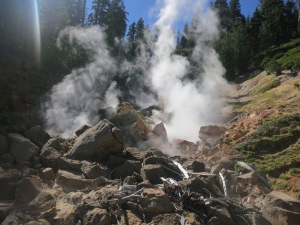 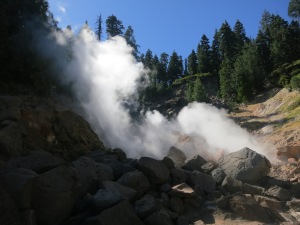 I headed back up to the PCT. The return trip seemed to take even longer! Finally, I reunited with my pack and continued on. I was a tired girl! The next sight that I came to was a murky green lake, boiling with sulphur! We were warned not to go near the edge or risk the ground breaking open and being dropped into the boiling sulphur! 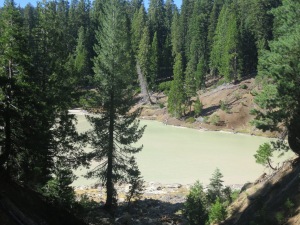 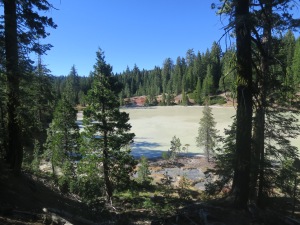 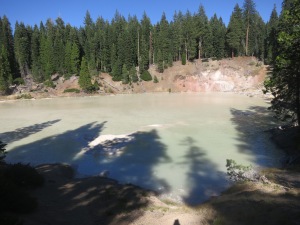 The dirt turned into red clay around the lake and some of the rocks were purple! 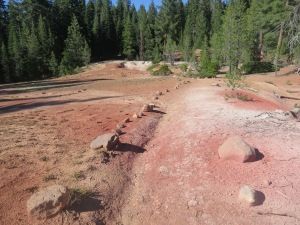 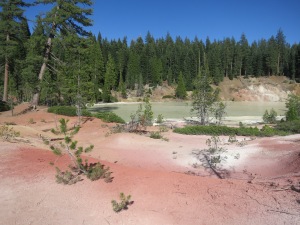 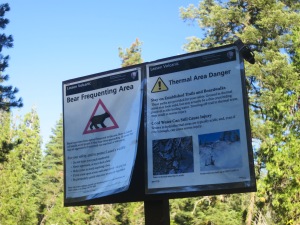 I walked onwards, finally approaching Drakesbad. There was a small wooden sign on the ground when the roofs of the buildings appeared. One said “hikers” and pointed down the grassy hill, and the other said “horses” and pointed to the trail. There was a trampled path through the grass, and I thought for several minutes about which way I should go. I finally decided to follow the hiker sign and walked down the grass. There was a creek at the bottom, which I had to cross over on some pipes, and then I came to a wooden gate. I opened it up and suddenly found myself on the pool deck with the lounging guests! One woman gave me a sheepish smile. I darted through and made my way up to the main building, where I was completely ignored by everyone, including the employee! I just wanted to ask someone where to pick up my mail drops! After a period of time where I was unable to get anyone’s attention, I started to look for some outlets so I could at least charge up my electronics! One of the two girls I had camped near last night came into the building and I asked her what we were supposed to do. She mumbled something and walked away, so I still had no clue. Finally, I got the employee’s attention and was directed to another building and a guy named Scott. Scott was completely enthralled with the pretty hiker who mumbled at me and also paid no attention to my existence. Meanwhile, the guests were gathering for dinner. I asked one of the young waiters how I could get my packages and he said he could retrieve them for me. After waiting a good amount of time, listening to the waiters ask the patrons if they wanted some kind of fancy wine, he came down with one of my packages. I had to tell him there was another… They had no ordering system here at all. All of the boxes were strewn around the storage room! He went back up to look, but could not find it and asked me to return later. I asked another employee what the rules were regarding the shower and laundry. He had to ask his manager and then came back and said that only people who had dinner reservations could use the shower and that they were already booked for tonight. I asked about breakfast and he said he would check his book… I was allowed to pay to use the washer and dryer. Finally, I asked about the campground, which I had read was a quarter mile away. He said it was 0.6 miles away- back on the PCT! I couldn’t believe it!
Last year, thru-hikers were welcomed with a big hug from the owner, given all of the extra food for dinner after the guests had eaten, and given free use of the shower and pool. Although some of the young employees were very kind this year, the new owners treated the thru-hikers like garbage. I returned to the porch of the other building, stopping to rinse some of the mud off my legs with the sprinkler on the way, and then boiled some water for some lentil soup with my stove while the guests enjoyed their steak and wine. Then, after I brought my clothes to the washer, I started sorting through my food. By the time my clothes had dried, it was approaching 8:00! I had to get walking to the campground! I had my pack on my back and a box in my arms. Fortunately, the woman who chatted with me for a bit on the porch (the same one who smiled at me about my entrance), asked if I wanted a ride. She thought that I was carrying too much to be at all comfortable. I happily accepted, knowing I was going to have to walk back and forth to have breakfast anyway. She told me that the campground host was very friendly and that I should check in with him. I started wondering if I was going to have to pay to camp…
Luckily, I did not. I chatted with this nice man for awhile and my mood began to brighten. He helped me pick a nice spot that was right next to his spot to “set up my tent” and said I was welcome to leave my pack at his site the next morning when I went to have breakfast. He also encouraged me to use the shower, no matter what they were telling me. (Even though I made a reservation for breakfast, I wasn’t allowed to shower that night). He also told me that some people were offering trail magic at one of the sites father away and that there were several hikers there if I wanted to socialize. By now, it was almost dark, and I just wanted to set up camp. I was very thankful for the pleasant, easy-going, and welcoming nature of this man. He was the person who made Drakesbad a decent place.
I think I surprised him by not setting up a tent and just laying out my sleeping bag. I put on my still wet thermal bottoms and hoped they would dry out as I slept! Because of the nice company at the end of my day, I went to sleep in a good mood.