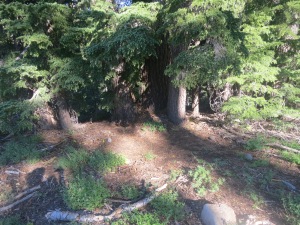 The wind, once again, made it difficult to sleep. I got up soon after the sun came up, ate my breakfast, and patched up my broken sunglasses with duct tape and then headed back up to the trail. I was glad that the trail continued along an open ridge. The views were beautiful and it helped give me energy.

Once down in lower terrain, I ran into a man who seemed to be leading a couple on a hike and they stopped to let me pass. The man who was being lead noticed that I wasn’t wearing boots and stopped to ask me about my trail runners. They were out for a five mile hike and were amazed that I was hiking the whole PCT. As we parted, one of the men told me that I was an inspiration! At first, I wasn’t willing to take in the complement, but then the woman said, “You really are!”. I let myself think about their words as I moved on.

I stopped to eat lunch at the top of a climb and realized that I was overlooking Squaw Valley, where the 1960 Olympics were held. I tried to take in the significance of this spot, as two of the Israeli hikers approached. One asked if there was reception here and proceeded to stop as well. I had been wanting my own space, but remained there to finish my snack as the one guy made a phone call and then joked with the other one. It was hot in the sun! 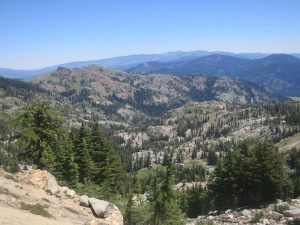 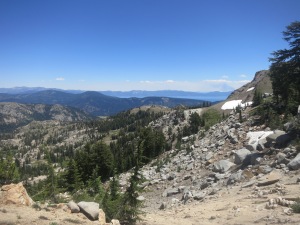 I headed down past the skilifts and later came across a group of four hikers, whom I had never met before. 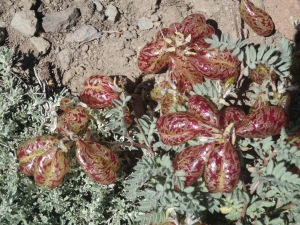 I later saw them sitting on top of a hill, at a time when I was looking for a place to take a break, myself. When they got up, I headed over to their spot. They told me I could keep a watch on the fire. I looked out to see a streak of smoke across the sky. 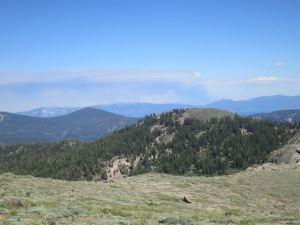 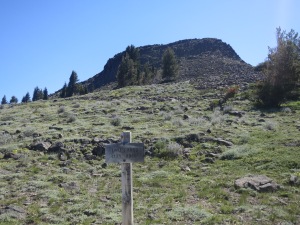 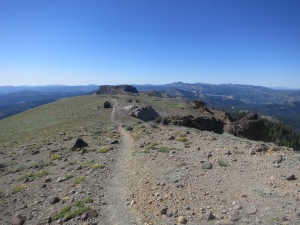 I finished up the climb, walked along the spine of a mountain, and then descended several switchbacks, feeling very tired. I had to stop to rest my shoulders for a moment, and when I looked up, I saw a huge cloud that looked like a nuclear bomb had just gone off! It was a very eerie sight. 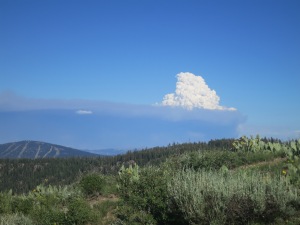 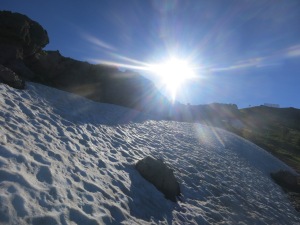 As I walked on, I came to some signs, noting the historical significance of Donner Pass, which I was approaching. Since I had sent a resupply box to the post office in Soda Springs, I had to end my day before I reached Highway 40 so that I could hitch in in the morning. (A lot of the other thru-hikers were walking straight to Sierra City and part of me wished I needed need to take the time to stop here). I walked by four hikers who were finishing up their two day hike. The woman asked me, “Did you have a good time?”. I wanted to tell her to ask me in 2 and a half months! Right now, I was in the middle of my hike! Again, they were impressed with how long I had been out for. I searched the surrounding areas for a place to camp, but nothing suitable was appearing. I secretly hoped this this group of people might offer to let me stay at their home with them and take me to the store in the morning, but they did not offer. I was now less than a mile from the road and descending switchbacks with no flat areas. However, a perfect spot magically appeared with a half mile to go! It was a little too close to the trail for my comfort, but it would do. I set up my cowboy camp, cooked my dinner, and watched the sun disappear behind the mountains. I realized that, although I was still 200 miles away from the halfway point in distance, that I was already halfway finished with the trail by the number of days. After I picked up my resupply box in Soda Springs, it would be time to start putting down the miles!