Today was a very cathartic day for me. I got up at 6:07, feeling exhausted and still very heartbroken. Emotionally, I was spent. More tears fell as I ate my breakfast and began to pack up. I watched the couple from New Zealand who were ending their hike walk by, and later, an older Japanese man. No one seemed to have seen me. I was amazed at how early everyone gets up out here!
At 7:30, I started walking and quickly caught up to the older man who let me pass by. I noticed that the side of my backpack was getting wet from my leaking playtypus and had to pull over and try to repair it with duct tape. I felt frustrated at already losing some of my walking time. Again, I passed the man and started a climb. I needed to release some anger along with more tears as I made my way up the mountain. By the time I reached the top, I started to feel a bit better.

I took a few minutes to climb away from the PCT and take in the views and then, as I started down the other side, I noticed that I had reception. I sat down on the side of the trail and wrote a text to my Swiss friend. He wrote back and we spent a few minutes communicating until I began to feel angry again. I needed to get moving anyway, or I wouldn’t make any progress today. I quickly lost reception and never got it back again for the rest of the day.

The Japanese man and I continued our leapfrogging. He seemed to grow more annoyed ever time I passed him back. One time, he turned his face away from me and reached out his hand, ushering me to pass. While I took frequent breaks and then quickly caught up, he kept a steady slower pace with no breaks. I put on my headphones and, for the first time in the Sierras, listened to music. I really needed the emotional outlet.
I found a rock to have a snack on and a girl passed by, who did not say anything. A little later, a male thru-hiker, who I had never seen, also walked by without the slightest acknowledgement. It’s rare for hikers to not greet one another out here, and I was left with a bad feeling. 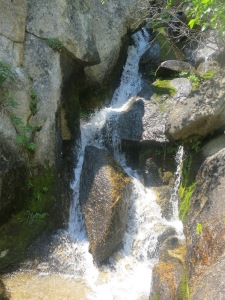 As I hiked on, singing and emoting, I gradually began to feel better. By the afternoon, I even started dancing as I walked. Sashay was making a comeback! Unfortunately, my intestines were still having a rough time and I was very worried about running out of toilet paper!
At 4:30, I found a nice tree to sit under and cook my Mountain House lasagna. I had seen Laptop eat this meal way back in the early desert and it looked so good. Finally, I was getting my chance to enjoy the same meal. 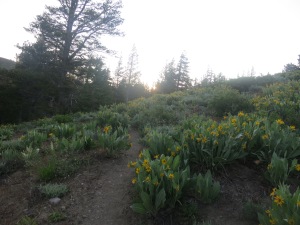 I walked on into the evening and blood began to spill out of my nose. I had to stop for an extended period of time in order to get it under control. Every time I thought it was finished, it would start right back up again.

I crossed over several streams and then started a small climb, searching out a place to camp as the sun set. I wandered around a marshy area and then ended up continuing on until I found a drier, but rockier area off the trail. I spent several minutes looking over the terrain and finally picked a spot at 8pm. I watched the sky turn color as I set up camp.

In the distance, I heard an unfamiliar sound that resembled a herd of cowbells. I was too tired to do any writing. My eyes closed as soon as I lied down.