I slept better than I expected and had some intense dreams that were still with me when I woke up. I got up at 6:07, had some granola with my soy milk powder and then made a cup of coffee. My sleeping bag was wet with condensation! Several hikers walked by along the main path, while I sat in my bag, but none seemed to see me, except for one who smiled. I later realized that he was the guy I had given some of my food to. I was pleasantly surprised that I didn’t have to immediately run to the bathroom. FunSize was there when I went down and asked me how I had slept.
I returned back up the hill to pack up my things and then collected my food bag from the bear box. (For the size of the bear canisters, not much actually fits in there!). I walked past the white canvas tents and went over to the water’s edge where I saw a little rainbow in the mist. A couple of the other guests at the camp were standing there admiring the view with coffee cups in their hands and I wished that I could stay and relax at one place like they were. 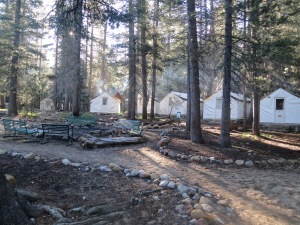 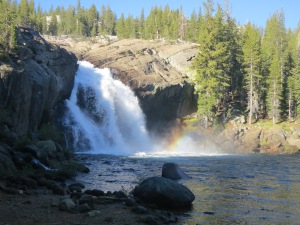 A bugle sounded and breakfast was called. Oddly, I wasn’t even jealous of the guests because the thought of food still hurt my stomach. I walked by some horses and then crossed over the bridge and got back on the PCT.

Several minutes later, my intestines badly cramped and I immediately had to release the contents. Why couldn’t this have happened while I was in the outhouse? This was horrible!
Luckily, the miles passed by fairly quickly in the morning. 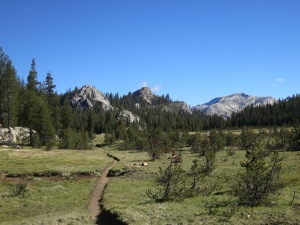 I took my first break on a rock and tried to repair the loose screw in my sunglasses. A couple passed by, named Lodgepole and Wuzy, who I hadn’t met before. They had skipped the desert section of the PCT. I walked with them for a bit. It was nice to have people to talk to for a change. We reached a big creek crossing, which Wuzy made it over with no problem by leaping onto widely spaced rocks. Lodgepole and I were not confident enough to try that route. She made it part way across before getting stuck and Wuzy asked me to help her out. She managed to get across and I followed her path.
We walked on and soon came to another large crossing. Billy Goat and another hiker were taking off their shoes and socks in preparation. He said he was surprised that he did not see me at Tuolemne Meadows the next morning. I told him I didn’t know how we had missed each other. A woman was on the other side of the creek. She had found a fallen tree downstream to walk across. I wanted to take that route, as well! Very slowly, I made my way across and reached the trail as the others waded through the knee-deep water.
Once again, my intestines cramped and I looked for a place to go to the bathroom where I wouldn’t be seen. Then, I climbed until I reached a nice flowing river, at which I stopped to collect and filter water. The others went on ahead. When I caught up to Billy Goat, he thanked me again for taking the time to chat with him the other day and that he thought to himself afterwards, “that girl is really sweet.” He said he was sad not to have seen me at Tuolemne Meadows. He told me that I was moving fast and that he couldn’t believe I was still sick.
I moved on, climbing with the trail and coming to yet another creek crossing. I paused to look over my options. Nothing looked good. I walked down aways and tried crossing it away from the trail. Unfortunately, I lost my balance and got my shoes, that Billy Goat was so impressed I had managed to keep dry until now, wet. I reached an area of pine trees and big rocks and found a place off the trail to eat some lunch and lie down for a bit. The sun was so hot that I had to keep shifting my position, though. It was rather uncomfortable. I realized when I reached a beautiful lake up ahead, that I should have waited to take my lunch break here.

It was now 2:00 and I still had 10 more miles to hike. I now had no more time for breaks. The mosquitoes started biting me, so I moved on. They grew worse as the day progressed and I threatened to take out my Deet if they didn’t leave me alone. Finally, I had to stop and put it on. These creatures would not let up! The afternoon miles dragged on much more slowly than the morning ones. 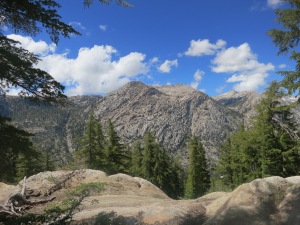 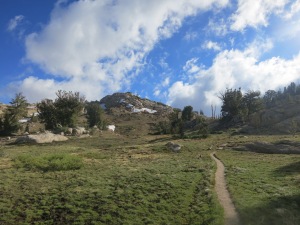 I stopped to make some lentil soup and had some milk chocolate covered pretzels for dessert. Once more, about an hour after I had eaten, my intestines demanded that they immediately be emptied. This was horrendous! Nothing like this had ever happened to me before! 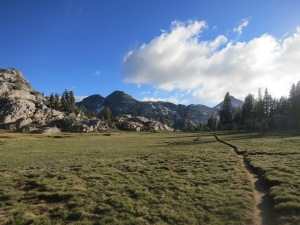 The trail became very wet as I walked, so much that it reminded me of the times that the Appalachian Trail had turned into a river! I didn’t expect this to also occur on the PCT! I walked until 8:07 and then scouted out a place to lie down. I realized that I had somehow gotten off the PCT and went back to see where it went so I could know which way to go in the morning. It took me quite awhile! I returned to my spot in the rocks and set up my sleeping bag. The mosquitoes were still swarming me and I had to put my head net on. I kept it on while I tried to sleep.