I saw a couple walk by on the trail while I was still getting ready in the morning. The man was moving slowly uphill and I quickly caught up to him and saw that it was Sharky from Silver Pass. His wife, Bibo, was waiting for him up ahead. I continued on alone in the forest until a hiker I had never met caught up to me during a pack break. He said his name was Prophet and was intent on getting to Red’s Meadow in time for lunch. I had no such goal. Twelve miles was still a good distance to hike and I just wanted to get into town.
When I caught back up to him as he was taking a break, he asked me if I had gotten a ride up to Onion Valley from a really scary man. He realized after I said that my name was Wendy, that I was the same person who had gotten a ride up to the mountain from the same man that had given him and Sagi a ride down. “Did you leave your snow basket in his car?”.
“Yes, I told him that, but he said that I didn’t.”
“Well, he found it and was shouting your name up the mountain. Wendy…! Wendy…!”
I shrugged. He said that that was the scariest ride he had ever gotten. He kept slamming on the breaks and driving in the middle of the road and was telling them the strangest stories. He asked them for money before they got in his car, as well. Only Sagi had a few bucks to give him.
I found it interesting that the guy drove them down the mountain and did not camp there after all. He obviously knew that we needed rides and was on the lookout for us. I was disappointed that he lied to me.
I took a break and let Prophet move on as Bibo and Sharky caught up. I dug into my food bag for some candy, which boosted my mood for the moment.
It didn’t take long for that pleasure to turn to immense pain, however. I crossed a creek where Bibo and Sharky sat on the other side eating and stood there, holding my stomach, unable to move. My face expressed the pain I was feeling in my stomach. I didn’t know how I was going to make it. One of the two asked me if I was okay and I said no. I told them the antibiotics had made me lactose intolerant and that I was in great pain. Bibo asked, “Do you want some cheese?”.
No! (I just said I was lactose intolerant…!).
I moved away until I found my own space and went to the bathroom. Then, I continued onward, walking mile after mile in the forest as the trail gradually descended. A southbound hiker headed towards me and told me I was almost there. (I still had about 4 miles to go. “Almost” means different things to different people..). He tried to boost my spirits by telling me that the restaurant had really good milkshakes. I frowned and said that I was now lactose intolerant and couldn’t enjoy a milkshake.
Later on, I ran into three day hikers. One lady exclaimed, “You look like you’re ready for anything” based on the size of my pack. I smiled and nodded. The man said that I had a challenging creek crossing coming up. My eyes grew wide. “Yeah,” the other lady said. “You get to walk across a big log!”. I smiled, wishing they could know half of what I had gone through in this last stretch. To them, this creek crossing was the big challenge of their day. For me, it was one of the easiest crossings I had done. It’s all about perspective.
I soon entered one of the ugliest parts of the trail I had seen. A massive storm had blown through, cutting through hundreds of thousands of trees, leaving a scene of destruction behind. The wind picked up and the sun glared overhead, and the walking became quite unpleasant. My sickness was making my mood decrease, as well. I walked past downed tree after downed tree, slowly descending towards Red Meadow. It felt like it was taking forever to get there.

Finally, I reached an intersection at which I got a bit confused. I saw the sign to Red’s Meadow, but couldn’t figure out where the PCT continued north. I followed the side trail, still not knowing if the buses were running or not. A hiker headed my way. It was Drama! “Well, hello, hello!” I said. I told him that I was still sick and he made a joke about it. I didn’t find it so funny. Our interaction was brief. He told me that a bunch of people were in the parking lot getting ready to hitch and I asked if I should hurry to try to get a ride with them. He said no, and we parted ways.

As I headed to the store to ask about the buses, I saw a group of thru-hikers standing in the area between the restaurant and store. One of them was the hiker who had told me to stop the psychosomatics. I did not want to be near him! The others I did not know.
I went into the store and upon asking, was told that the buses would start running on Saturday. Really? It was a low snow year and on a normal snow year, they were supposed to start running on June 15th. I went back outside and saw an Asian man heading towards his car. I followed him and asked if he was going to Mammoth. He was. “Could I get a ride with you?”. He looked at his wife, who was helping her daughter up the stairs. “How many of you?”.
“Just me.”
Luckily, she agreed! I put my pack in the back and got in the seat with the cute little girl. Her older brothers were in the seat behind us. The parents were interested in my hike and the father, in particular, had several questions for me. He wanted to know what the hardest part had been for me and what I liked best about it. He seemed to understand my answers and I could tell that he was looking for some of what I was finding on the trail in his own life. The girl wanted to play peek-a-boo with me, and kept asking her parents if they were almost at their hotel. When they told her they would be going out for lunch, she groaned. She said that sounded “awful!”. I guess the car ride was making her stomach hurt. I could totally relate! Every meal had sounded awful to me for over three weeks now.
They brought me to the Motel 6, where I had my packages sent, and went on their way.
After checking in, I ran into Greg (Sprinkles, now known as Butters), which was a surprise. He was with B-Rad, Spoonman, and Skinny D. Greg wanted me to show him some stretches for his IT band which had taken him off the trail at Tuolomne Meadows last year. It was acting up again. I told them about my lactose intolerance and Skinny D said that her friend had become permanently lactose-intolerant after taking antibiotics. Great!
I took a shower, changed into clean clothes, and headed out to find something to eat. There was a healthy cafe close by and I ordered a veggie burger that came with a side-salad and some corn chips. I felt so grateful for some real, healthy food, that I started to cry a little. 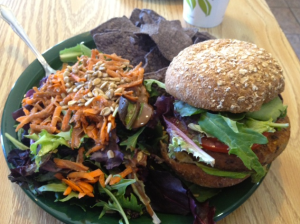 I headed across the street to the outfitter to see if they had my shoes and found out that they did, but not in my size. They did have a half size smaller. After trying them on, I decided to go ahead and buy them rather than wait at least another 100 or so miles. The man also helped me find some lactose-free dehydrated meals, which was nice. I headed over to the natural foods store and looked around for any snacks that did not contain dairy. All of the food that I had pre-bought for my hike had dairy in it. I didn’t know how long I was going to be lactose intolerant and the thought of needing to buy all new food for the remainder of the trip had me very worried about the expense. Bambi appeared in one of the aisles. He asked me how my stomach was and I told him it was not good. I said that I ran into Purple Haze in Lone Pine and that he told me that you need to take flagyl for five days! Bambi said his dose was extra strong. Great. I took a huge dose that proceeded to destroy everything in my stomach. He told me that there was some really good pizza next door and upon realizing I wouldn’t be able to eat the cheese, said that they probably had one with just bread and sauce. No, thanks. We walked back up the road to the motel and went to our separate rooms.
I opened up my two care packages. One was from a woman from my yoga mentorship. She said she was going to buy me the specific things I asked for, including a package of Love Crunch granola, and a lot of packets of Starbucks via! She also bought me some grapefruit seed extract for my belly, as well as a box of probiotics. Luckily, the granola turned out to not have any dairy in it! She also included some gluten/dairy free cookies and oat bars. (Thank you so much, Susan!) I also got a super nice package from a woman I went to high school with and just re-met at our reunion last year. She bought me some delicious snacks that were the perfect back-packing size. And her kids drew me a sweet, encouraging picture. I felt so honored! (Thank you, Tanya!)

I returned to the cafe for a snack and after a little electronic communication, went to bed.