I watched the early risers pass by while I performed my morning rituals and was glad to be well enough off trail so as not to be seen. My mood had not greatly improved overnight. Somehow, Dust Bunny ended up sneaking up on me and scaring me! She told me that I made a wise choice in continuing on last night, as the socializing reminded her of a bar scene. She was in need of her own space and decided to scout out a spot to have her breakfast. In just over five miles, she would take a side trail down to the John Muir Ranch in hopes of finding some food to carry her through the next section. She also planned on stopping at Mono Hot Springs. I was going to bypass both spots and just get into Mammoth. I headed out and told her I would probably see her soon.
I crossed the bridge spanning the creek I had camped near and followed the creek back in the opposite direction. As I came to another ford, Commando hiked up to me wanting to know how crossing Evolution Creek had been for me the night before. I was still not over my feelings about having to cross it three times. “Fine,” I told him. I wondered why everyone was talking up these crossings with such fear. If there was no one out here dispensing their own fears and advice, I would just keeping following the path in front of me. He asked me if my shoes had dried out overnight. “No, they did not.” How would shoes be able to dry out in the dark cold air?
He moved swiftly down the trail and I tried to relax into my own space. The trail climbed and followed the path of a gorge. I didn’t find it to be the most beautiful of environments, but maybe my mood was clouding the view. 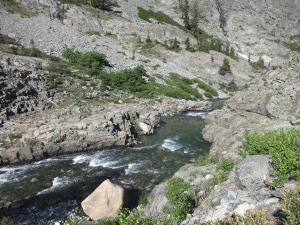 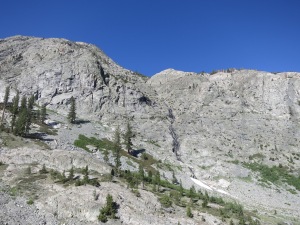 I walked on and took a quick break along the side of the trail. A quiet man dressed in camo walked by in the other direction. He seemed to be about as happy as I was and I wondered what his story was. What was he in search of out here? The trail turned right as it crossed a bridge. I passed several nice campsites that were tucked away and thought about what it would be like to spend the night there. Then, I came to a steel bridge, where someone had left a note for another hiker. He had gone ahead when his friend didn’t show up and hoped he was still alive. The note was written several days earlier. 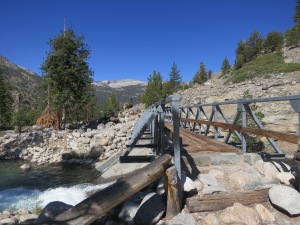 I had been wondering if the buses from Red’s Meadow to Mammoth were running yet. Service was supposed to start mid-June, but often started earlier in low snow years. I asked a couple headed in the opposite direction if they knew, but they did not. The woman recommended I hike to the Ranch, where I was sure to find out the answer to my question. She told me I could find internet and other luxuries there. I thanked her and moved on. I found a rock to sit on and take another break and watched a father and daughter hike southbound, as well. I was surprised that Dust Bunny had not caught up to me. I never did see the trail that headed toward the ranch, but turned right at the upcoming intersection to follow the PCT as it began to climb.
The annoying man and his brother were taking a break at the stream at which I needed to collect water, but luckily, I was able to walk down and find my own little piece of land to collect and filter my water before heading off.
I later heard the man talking extremely loudly behind me. It was very jarring and luckily not something that I had come across much on the hike so far. I managed to stay ahead and then found a little inlet on the lake to stop and sit at.

As he passed by, he shouted out, “Hi Wendy from Boston!”. My mood sunk even lower. I ate a snack and watched the dragonflies flying above the water. I wanted to take a picture of them, but found it impossible. They kept moving! I started looking at things on the earth and noticed how beautiful the concentric patterns of a pinecone were. I was reminded of how we really only see things when we stop and take the time to look around us. My mood started to lift a bit. 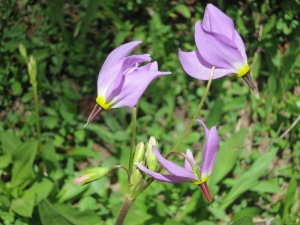 I packed up and walked by a tree with a tremendous curvature in its lower trunk. I touched it with empathy, noting the similarity between its curvature and my spine.
I continued to climb back into the granite rocks that were dotted with pink flowers and green grass. Four young female hikers were headed down and I stepped aside to let them pass. 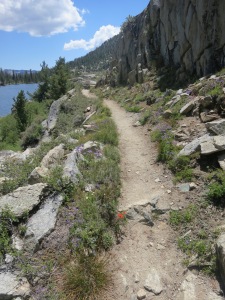 I stopped to look at another alpine pond and continued the climb, slowly making my way towards Selden Pass. I looked behind me and noticed a hiker steadily gaining on me. He overtook me just as we were reaching the top. I told him he was looking strong- the very opposite to the way I was feeling. I crossed a small section of snow and dropped my pack at the height of the climb and we introduced ourselves. He said his name was Doogie Howser and that he was getting off the trail at Echo Lake. The mosquitoes started attacking.

I wandered over to the south side of the pass and found that the view was much more beautiful over there, so I returned to get my pack and bring it to a rock farther down for my lunch break. The mosquitoes were even more horrendous on that side of the pass, however! I took out my Deet wipes and slathered it on my skin. These bugs weren’t going to allow me to enjoy my lunch or the view.

I headed down the pass and walked along a pretty path, where clear streams cascaded down the hills and made the grass ripe with wildflowers.

I eventually reached another ford and saw a fallen tree to help me cross it. I was growing tired and once I saw a large flat spot to the right of the trail, decided to stop and cook my pasta dinner. I was still feeling physically ill, which affected my mind and attitude, as well. A couple passed by looking in much better spirits than me. In the last section between Kennedy Meadows and Kearsarge Pass, my stomach was in a tremendous amount of pain, but the rest of me felt strong and happy. This section was a different story. I was still in a world of pain and now, it seemed like I had lost a lot of my energy, as well.
I reached the next “dangerous” ford according to my guidebook notes and looked across the water to see the couple changing back into their hiking shoes. The woman waved to me and then hiked on. I decided to change into my crocs and keep my shoes as dry as possible. The water only reached my knees at the highest height. It took much longer to change into and out of my shoes than to cross the actual creek. I headed onwards and was not happy to discover that I still had more fords ahead of me! As I carefully placed my feet on the rocks, the mosquitoes suddenly attacked. I felt as is they knew my hands were completely tied up, trying to keep me upright with the placing of my poles. “She’s fully occupied. Get her now!”.
It happened again when I was forced to climb over fallen trees across the trail. The sunlight was fading and my body was tired of all these obstacles. I stepped over little streams and finally saw a flat spot to the left of the trail, where I would make my home for the night. Despite the mosquitoes, I set up my cowboy camp and turned on my phone to see what mile I was now at. I was incredibly surprised to discover that I had reception and was able to chat with a friend from home for a few minutes. I covered my head with my sleeping bag liner and tried to fall asleep.