Doug said that breakfast would be available at 8:30, which is late in the day by thru-hiker standards, but you do what you gotta do. We had gone to bed late and I didn’t sleep so well (as usual for the first night in town), so I didn’t mind lying around a bit longer. It turned out they were ready for us earlier than expected. I walked down to the breakfast room and found a table of thru-hikers already finishing their breakfast- Delaware Dave, Seeking, Razor, and a younger guy that I had never met. Bambi and I sat at the next table. Strider had heard that I was suffering from giardia and wanted to know if the bigger portions that they gave to thru-hikers would be okay on my stomach. I said yes and turned to Bambi and said, “We didn’t even get dinner last night.” My thumbs were still badly cracked and I was desperately in need of band-aids. I spent a good part of breakfast wondering if anyone would be able to spare some. I finally asked Delaware Dave after we had finished and he said that he would see what he could come up with. I took a shower and was actually able to enjoy it this time, rather than furiously scrub off as much dirt as I could before Bambi wanted to use it. We were both in a similar predicament of being stuck for post offices to open on Monday- his in Independence and mine in Lone Pine. The other group of guys was moving over to the bigger town of Bishop, 40 miles away, as it had a lot more to offer than the couple of restaurants in Lone Pine. I wondered if I should do the same. 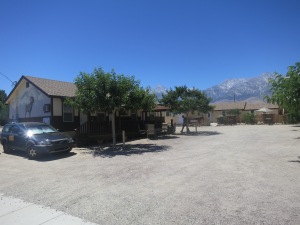 After I showered and packed up and decided that I would try to hitch to Bishop, I took my pack outside and saw Bambi sorting through a ton of food that he had received in his resupply boxes. “How did you get your boxes already?!”. He had walked over to the post office to see if there was any way he could get them, knocked on the door, and was given his packages! Now he was free to head back to the trail! Bambi’s sister-in-law had made him tins of chocolate confections. I had never seen anything like it before! How lucky! He offered me a couple of them as he continued to sort and thought about what he was going to do. The sun was baking already baking us. I wondered how anyone could stand to live in the desert!
He decided to hitch into Bishop with me after all. The other guys had had amazingly good luck getting a ride, so I was hopeful. We walked down to the gas station in the mid-morning heat and stuck out our thumbs. Car after car passed. This wasn’t so easy! Bambi was still holding his Christmas tins. We waited and waited and waited as the sun glared down and caused sweat to roll off our skin. Why wasn’t anyone stopping?
Finally, a beat-up car pulled over. The skinny young driver said that he would have to make room for us and opened his trunk to start shifting things around. Burnt cigarettes were pouring out of the pocket on the driver’s side door, and I didn’t know if this was a car I wanted to get in. The guy explained that he was just coming back from a music gig and that’s why his car was so packed. We all fit in and headed off to Bishop. The concert in the desert hills apparently wasn’t very successful, and the guy was running on no sleep. He could tell that we were suffering in the heat and needed help, though, so he decided to stop for us. He turned out to be really nice. He let us look through the Burning Man program for amusement and later told us about his experiences with DMT. His stories seemed to agree with a lot of things that I have learned from yoga, and when I asked what he thought about that, he agreed. I liked the guy more and more. He told us a little about the area and how LA had taken all the water from the area and sucked it dry. He said this one area used to be green with trees and now it was all brown grass.
As we turned into Bishop, he asked if it was okay if he dropped us off at the coffee shop. I told him we would buy him lunch or at least a coffee, but he said that his family owns the shop, so he was all set. I got a smoothie, a cookie, and a chocolate croissant and ate it in the cushy chairs in the air conditioned inside, while Bambi sat outside. We had to figure out what motel to stay at. The cheapest one was on the other end of town and felt way too far to walk to. I suggested we walk across the street to the Rodeway, where I knew the others were staying. We found Whistler (the young guy I didn’t know) using the computer in the lobby. Bambi offered him a rice crispy treat from his sister-in-law, and I found Whistler’s reaction priceless. He gazed at it in incredible amazement, wonder, and gratitude before putting it into his mouth. Bambi got us a room that turned out to be a couple of doors down from the others. 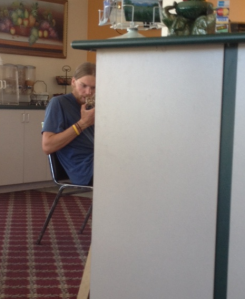 I wanted to go to the outfitters to look for a couple of things, but I also felt very tired and wanted to take a nap! Bambi suggested we go to the outfitters first. I saw a lot of desert hats and started trying them on, even though I didn’t need to buy one then! I picked up another platypus container, as mine already had a leak in it, and looked around for a black fleece. They didn’t have any of those. I ended up buying a pair of dangling earrings and a bunch of postcards instead! On our way back, we checked out another outfitter that had used clothing. I found a hooded, pullover, small black fleece for $13!

We returned to the room and both decided to take a nap. Bambi fell asleep, but I did not, as I wasn’t feeling comfortable in that space. We had talked about joining the others for Sushi later on. My stomach had not improved at all and Bambi asked me if I wanted another dose of flagyl. “Another one?”. He said that he had looked up the dosages and found that one dose was usually only about 30% effective. He was actually carrying four doses with him, so I agreed to take the second dose with dinner.
Razor was clearly in charge and loves to expound on his knowledge of various topics. I was having a tough time with him and tried to be polite and get through the meal. I was happy to finally get a sushi dinner after craving it for the past 8 months, though! The last time I had had sushi was years ago! 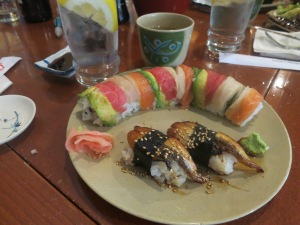 Bambi told everyone my jackelope story, complete with my earnest demeanor as I told Doug what I was sure I had seen. I laughed so much listening to someone else tell the story- especially when they described what a jackelope is. I was still laughing about it when we left and Seeking thought it was great that I could be amused so easily!

I wanted something chocolate for desert after dinner and walked down the street alone to see what I could find. I didn’t find anything, so I returned to the room. Bambi and I both decided to make use of the outdoor pool, staying on opposite sides. Now that the sun had gone down, it was too cold for me to go all the way in, so I just sat at the edge and watched a mother and daughter interact. After awhile, they included me in their conversation, which was nice.
I went back to the room and took a shower to warm up and texted Muk Muk to let her know where I was. It turned out that she and UB were unexpectedly in Lone Pine because UB had hurt his knee! She didn’t know if they would head back out tomorrow or if they would stay until Monday. I told her if they stayed tomorrow, we would be able to see each other! After a little communication and updating people from home, it was finally time to go to sleep!