Ice Bucket woke up earlier than I did and headed out while I went through my morning routine. I was glad for the bit of privacy as I needed to take care of my additional girl issues. I was also thankful that I knew where the water access was after talking to Walking Home last night. I packed up my things and walked down to the creek. And then, Drama appeared! He said Weeds was not too far behind. Suddenly, we were all in close proximity again! I asked him if he had any extra bandages that he could spare because both of the tops of my thumbs were deeply cracked from rubbing against my poles and bleeding. They had been like this for days and anytime I put band-aids on them, they would quickly fall off. I had also deeply ripped one of my thumbnails! He gave me some white wrapping tape and help me bandage my thumbs, telling me I now looked like Seymour from ‘Little Shop of Horrors’. I remembered how much I love that song “Suddenly Seymour” and felt so happy after he said that! We found separate places to collect water and then, while I was filtering mine, said he was going to head out. No one wanted to wait for anyone else around here. Sigh.
I reached the PCT and walked along for awhile before seeing a hiker ahead of me. It turned out to be Yardsale, who was looking for the next water source. I told him that it should be off to the left at a bend in the trail. I reached an intersection with a sign, looked at the options it gave, and then headed where I thought I was supposed to be going. At some point, I decided to check my GPS and discovered that this was not actually the PCT and had to turn around, losing time. I should have just ignored the sign and continued straight. The trail climbed and as I continued up, I saw a hiker sitting alongside it. Weeds! Yardsale was just ahead and wondered how I was now behind him. I had to tell him that I had gotten lost. We all hiked at our individual paces, but would chat whenever we caught up to someone taking a break. 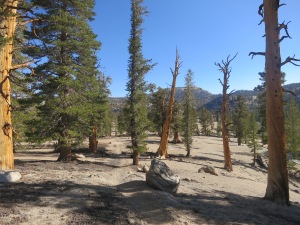 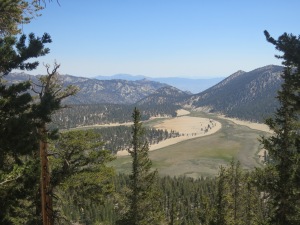 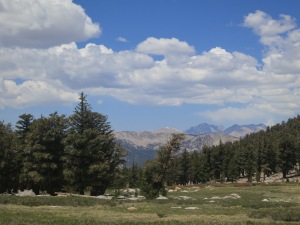 I caught back up to Drama and found a nice big rock to sit on with a view. He wanted to see how my jetboil stove worked, so I cooked the second half of the meal that I didn’t like so much yesterday and let him have it. My eyes got wide as I saw Icebucket approach! How on earth was he behind us? He grumbled about accidentally heading down the the Trail Pass that leads to Lone Pine, losing a couple of hours time! He was not in the mood to chat!
We moved on and met up again at a little cascading stream, that was perfect for collecting water. Yardsale was already there. When he heard about my stomach pain, he said that he was worried about me! “People die from that!” he cautioned. I moved on and let them have their conversation about their girlfriends.
Drama then passed me back as I was taking a break along the side of the trail. Our next destination was Chicken Spring Lake, which I looking forward to taking a relaxing break at. After a couple more miles of walking, I came to a dried up creek outlet. Drama was sitting on a large rock beside a tree nearby. “Is this the lake?”, I asked, somewhat appalled. He shrugged his shoulders and said he didn’t know about a lake. How could the lake have completely dried up, I wondered. This was terrible. Dejected, I joined Drama on the rock. Weeds came along and also asked if that was the lake. “Isn’t it beautiful?”I asked. She joined us on the rock, also extremely disappointed, as we sorted through the contents of our foodbag. Drama said that he was the only one not upset because he wasn’t expecting anything! Then, Yardsale happened along. He couldn’t believe this was the lake and decided to follow the creek up and see what he could find. When he was out of sight, he called to us, “It’s here!”. We packed up our things and followed him up the marsh. Delaware Dave was just headed out. I couldn’t believe the sight of the actual lake that we had nearly missed! It was one of the most beautiful things I had seen on the trail so far! Yardsale had made his way to a rock on the far side, while Weeds and Drama stood along the grassy bank. 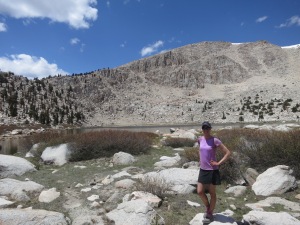 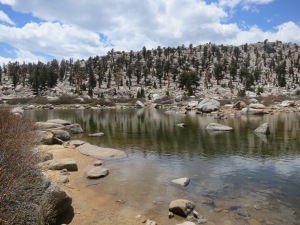 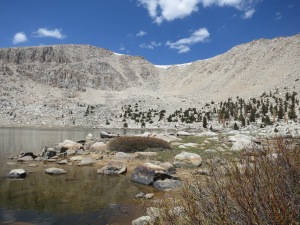 I headed down to a rock on the edge of the water and unfolded my sleeping pad. I so badly wanted to spend a couple of hours here, but I had only minutes to spare, as I still needed to get in 10 more miles before nightfall in order to set up for Mt. Whitney the following day. (I couldn’t believe I was about to climb the tallest mountain in the lower 48 states already!! Everything was happening so fast!). 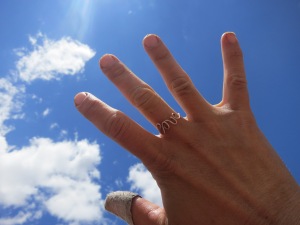 I lingered as long as I could and then got moving again. Weeds and Drama had left long before me. As I was climbing away from the lake, another hiker caught up to me. He had just come back from Lone Pine on the Cottonwood side trail. He walked with me and I was grateful for some conversation to distract me from my stomach pain. He told me his story about the lady at the Lone Pine Post Office. He knew exactly how many letters and packages had been sent to him, had the tracking numbers for the packages, and went up to her and asked for them. She came back and told him there was nothing there for him and told him to come back later. He returned just before they were to close, and once again, she said there was nothing there and that he should check back in the morning. He returned, told her to forget the letters and other packages- he just needed the package with his shoes in them. She quickly looked and again said there was nothing for him. This time, he would not take no for an answer. He told her that he had nowhere to go except the trail and that he couldn’t hike unless he had his shoes. Until she was able to give him the box that he had the tracking number for, he would set his tent up in the lobby and wait. She took one more look and came back with every letter and package that he was expecting, explaining that it was out of alphabetical order. Oh, boy… This worried me because I had my packages sent to that post office, as well! 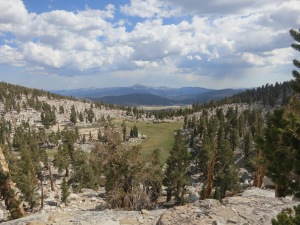 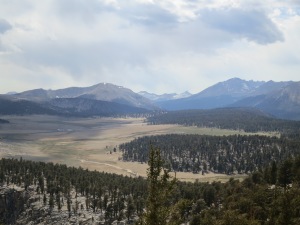 We hiked on and eventually found Drama sitting beside the trail, rubbing out the soles of his feet. I needed a snack break by that point, so I sat down near him. Then, I took the lead when Drama decided to stop with Weeds and Turner and cook dinner. We were all aiming to get to Rock Creek, where they had bear boxes for safe storage of our food. There was also supposed to be a ranger’s station nearby, where I hoped I might be able to get some antibiotics for my giardia.
I ended up stopping to cook my dinner before I made it there myself, however. This day was dragging on and on, and I was losing my energy.
Weeds passed by, and then I passed by her. I reached a stream and stopped to collect water (not realizing I would be camping next to a stream!). I walked on until I came to the sign for the ranger station and then followed the path. I saw several deer in the area. Turner waved to me as he continued to the campground. I followed the path for awhile, but saw no ranger station, so I decided to turn back. 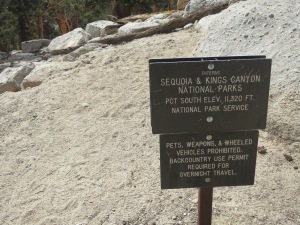 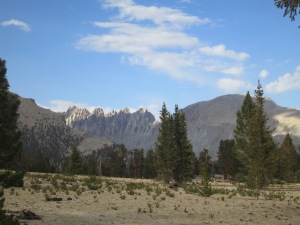 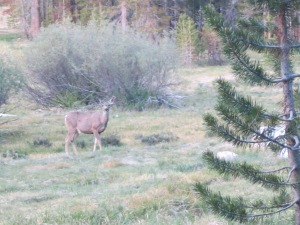 Weeds was very happily reuniting with Ice Bucket, who had already been there for awhile, and the rest of us moved to a different section. Everyone had sent up their tents because the sky had turned cloudy and they thought it might rain. I decided to risk it and cowboy camp. Since it was Yardsale’s last night on the PCT, he made a fire and I took some tea and my jetboil over to enjoy it with some of the others. A roaming ranger was also camped there and he told us that the real rangers had not yet been stationed. Drama, Weeds, and Icebucket had all decided not to climb Mt. Whitney, leaving me alone to take that side trip. Yardsale was the only other person in this group that was going to climb it and when I mentioned that I was climbing it, too, he acted like he didn’t know that. “Yeah, remember when I told you that I would be climbing it with you?”.
“Oh, no,” he said. “I’m not climbing Whitney with anyone. I’m doing it on my own. It’s my last day on the trail.”
As he returned to his tent, I told someone that Yardsale and I were both planning to get to the summit for sunrise, but we are doing it separately!
No one wanted to stay up any longer and retreated to their tents, so I walked back to my sleeping bag. I was now alone for the rest of the Sierras.