Dr. Sole had told me that I should come over for breakfast in the morning. After I woke up, I walked over to the kitchen in the shed to return the coffee mug that I had borrowed and found a huge group of hikers there. One of them asked how my stomach was feeling. I started launching into how it always feels not too bad in the mornings because I haven’t put anything into my stomach for many hours, but the pain grows during the day after I start eating. Before I could finish, my eyes rested upon a tall hiker, standing with a little smile on his face and a coffee mug in his hand, his eyes upon me the entire time. UB! I stood there with my eyes wide and mouth open for several seconds. “When did you get here?” I asked him.
“Last night at 1 am”. He had hiked the 52 miles from Walker Pass with three other guys in one day! Craziness! We gave each other a big hug and I told him to come with me to Dr. Sole’s. Before we left, a hiker told me to stop the “psychosomatics”, which I really couldn’t believe! Otherworld advised me to think positive thoughts- if I thought about the pain coming back in the afternoon, it would. I said I would try.

We found some folding chairs to sit in under the already crowded awning besides Dr. Sole’s RV. We were served chorizo burritos and coffee. I didn’t think it was the best thing for my stomach, but I ate it anyway. 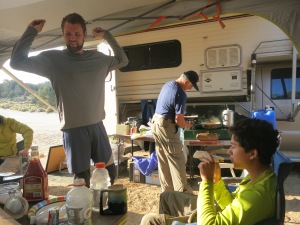 Weeds and Ice Bucket headed to the store to get an egg breakfast and said they would be ready to leave by 10. I returned to my trailer, packed up my pack with the humongous bear canister inside for the first time and joined a table of hikers outside the store. The french toast and eggs that people were eating turned my stomach, but someone was eating an ice cream cookie sandwich and that seemed like it would be much more gentle, so I got one of those! 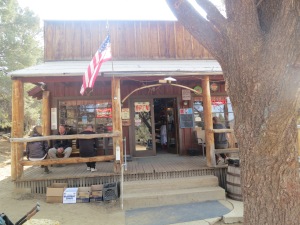 UB had retrieved his cartload of resupply boxes and was starting to sort through them. I got to watch one of his recent videos, which again brought tears to my eyes. He said that Muk Muk was expected to get here around 6 in the evening. I knew she would need another day to get her supplies together and unfortunately, I didn’t feel like I could wait that long to get moving. 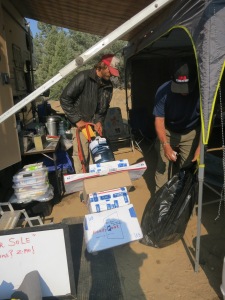 Weeds, IceBucket, and Drama came by and said they were heading out. I said my goodbyes and followed them down the road. 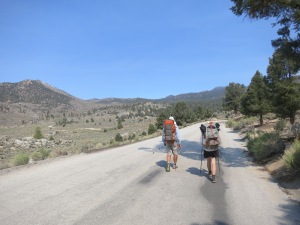 IceBucket told me that I looked like a tennis player in my new outfit. Drama said that my calves were really tan, but the backs of my thighs were pale. “Well, now they will get a chance to get some sun, too!”. As we walked down the road, two hikers headed towards us. “Cowboy?” I called out.
“Yup”. He seemed very distant, which I found strange. I had not seen him since Little Jimmy Springs Campground and he had nothing to say to me except, “See you somewhere in the Sierras.” Okay! I tried to return my attention back to our little group. We found the PCT in the desert scrub and headed along the sandy path. They said I could take the lead. I was expecting to enter a new environment of dirt and trees and huge mountains, but right now, it was still desert, and the sand was deep and slow to move through. 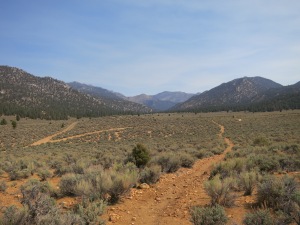 A couple of miles away, there was a campground that Weeds said they would stop at to get water. I arrived there ahead of everyone else, used the restroom, and tried to fix the gaiters that I had used on the AT and CT, that now seemed way too big with the socks I was wearing. I wished I could get rid of them immediately, but I was stuck with them at least until I got off Kearsarge Pass. I also discovered that I had already lost one of my snow baskets! The entry into the Sierras was not going so smoothly! 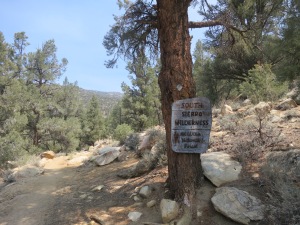 No one showed up, so I decided to keep going. I came to a little river and decided to take a break and put my feet in. Ice Bucket came along and said he was going ahead to the bridge, and Weeds and Drama did the same. I dried my feet, put my toesocks back on (a time consuming process), and then my gaiters and shoes.

I walked on until I came to the bridge and was happy to see my little group taking a break on the other side! We all went down to the water to refill our bottles and snack. Ice Bucket headed out first, followed by me. Weeds didn’t seem happy that I wasn’t waiting for her, but I said I would see her again in a few minutes!
We entered yet another burn area and there was no place no escape from the sun.

I would have to reset my expectations for what the Sierras would be like. We were still in the desert as far as I was concerned. Cactus and sage and sand still abounded, with rolling hills in the distance. 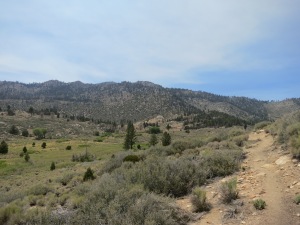 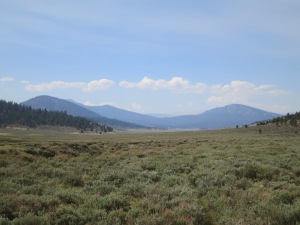 I was now far ahead of the others and walked alone all afternoon. When I reached a bridge crossing a small river, I decided to stop along the bank, cook my dinner, and wait for the others. I knew that Weeds wanted to stop at the place at which her stroke occurred last year, and that she needed support to get through this significant place. A couple of other hikers were also hanging out here, but they weren’t people I knew or were close to, so I moved down the bank to find a place of my own.

My stomach was not feeling well. I decided to try the tortilla soup kit that John had sent me, thinking that would be the most gentle on my stomach. Before I cooked it, I headed down the river, trying to find a place where the water was flowing enough to be able to get inside my small mouth squeeze bags. I had to step on some rocks and balance on them in the middle of the river.
Ice Bucket was the first of the three to arrive and immediately began looking for a place to set up camp. Razor directed him to a wooded site up on a hill. When Weeds arrived, she went to ask Ice Bucket what he was doing. She had planned to continue walking until she reached her infamous spot. He packed up and the three of them decided to collect water and head out, waiting until later to cook dinner. I was ready to go as, well, so we all left together. Someone had shaped some rocks into the words, “Go Weeds!” at the base of the bridge. She was very touched.

We headed out into the evening air with me in the lead, followed by Ice Bucket, who was frustrated he couldn’t keep up, and Weeds and Drama together behind us. The trail wound through open desert hills and I felt happy where I was. 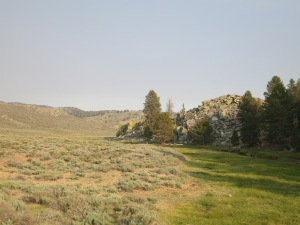 We entered a wooded area, where a chickadee-like bird sat, pecking for food in the middle of the trail. Miraculously, it was not scared away by me, and Ice Bucket and I got to watch it for a few minutes! He thought that was amazing! Ahead, I saw a deer run across the trail and hoped I would be able to get a better view of it ahead. But then, we saw another display for Weeds along the side of the trail. Someone really nice had taken the time to show her their support and love and we wondered who it could be. We waited for Weeds and Drama to catch up. Ice Bucket asked her who loved her. She said, “I don’t know. Do you love me?”. He said yes. “Do you love me?” she asked me.
“Yes!”.
Then, she saw her name and the shape of a heart formed with pinecones and stood there in awe. She said that it actually brought tears to her eyes and that she is not someone who displays emotions. We all took in the moment, offered Weeds some words of support, and continued on, searching for the spot of her accident. 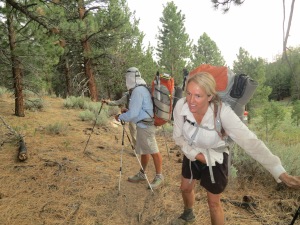 There was a very small creek up ahead with a possible place to camp and Weeds said that, although that was not the place, she would be willing to stop there for the night. We arrived to find Walking Home set up there already, and while Ice Bucket sourced out the water situation, we thought about whether to stop or move on. We decided to move on. I broke ahead of everyone again and came upon a nice source of running water! I heard my name being called from behind and was told that they were going to stop there. I turned back and scouted out an area to set up. It turns out that the path I had taken was a side trail off the PCT, but I was glad I had taken it for the discovery of water there! Drama set up his tent, and the three of us cowboy camped. It was our first night using bear canisters and Weeds wanted to set them far away from our sleeping bags. I wasn’t worried and didn’t mind leaving mine right beside me. The others wanted to leave theirs near the foot of my sleeping bag!
Scott, one of the store workers at Kennedy Meadows, had given Weeds a gatorade bottle filled with Tequila to help her get over this momental place on the trail. She welcomed us to share it with her. I had never tasted Tequila before, so I tried it, hoping it would help kill my stomach bugs. It was not too strong! Ice Bucket shared his Good n Plentys, and we talked and laughed, and then headed off to sleep. Weeds wanted to step under crossed hiking poles raised over her head to the sound of Chariots of Fire in the morning.