I had no need to wake up very early because I only had just over 11 miles to get to Kennedy Meadows! I ate some breakfast and then needed to quickly find a place to go to the bathroom. What came out looked like a big, wet cow puddle, which confirmed the stomach pain I had experienced the evening before. Just as I was finishing up, a hiker came along. “Drama?!” I said, partly in disbelief, partly needing a few more minutes before I was ready to see anyone. With my toilet paper in hand, I told him that I just had to pack everything up. My sleeping bag was still out and he made a comment about me being a late-riser. “What time did you get up?” I asked him. He said he was walking by 5:30! He also told me that he had camped with Dinnertime last night! Dinnertime was close by? I hadn’t seen him since before the Saufley’s! How exciting to have people I knew around me again!
We continued to chat and catch up as I stuffed my possessions into their stuff sacks and then into my pack, and then we started walking. We had so many things to fill each other in on, as we had not seen each other since mile 110! Apparently, when he had texted me asking what my shoe prints looked like, he was only a mile behind me! He really was following my footsteps! I was amazed he hadn’t caught me sooner! He asked me about the night I spent at the trail angel’s house in Warner Springs before kick-off and told me that he had had a bad feeling about it when I got in the guy’s truck. “You did?”. He said that he knew that I was a tough girl, though, and that I would be all right. We talked about who he had been hiking with, and how he missed Lorax. 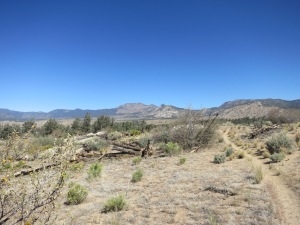 We found a tree to sit under to take a snack break and since he was nearly out of food, I gave him some of my extra. He traded me some nabisco crackers. It was a nice feeling to finally have some company!
We walked to the Kern river, where it wasn’t apparent where the water was most easily accessible. 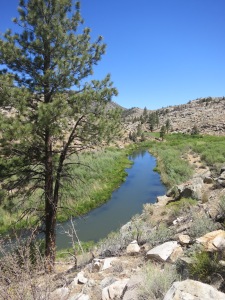 I suggested we stop at a certain point, and it turned out to be a good decision! Drama decided to take his shoes off and wade in the freezing cold water while I stayed along the banks. He helped me fill my squeeze bags for me, which I appreciated. Earlier, he had talked about the sense of space that we give one another on the PCT, as opposed to New York City, where everyone is in your face all the time. He talked about how he and Dinnertime sat along the bank of a creek during a break, chatting with each other, but sitting far enough away that they each had plenty of their own personal space.
As we were packing up, Dinnertime came along! The three of us hiked together until Dinnertime found a lake to fish in. He said that he would see us in a few minutes, but I didn’t understand how that was possible if he was going to stay there and fish!
Drama and I reached the 700 mile mark and took photos of each other. 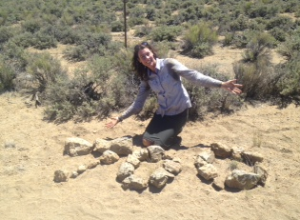 My stomach wasn’t feeling well again and I was unsure of what to do to make it feel better. We walked the last official miles of desert and came to a registry, as Dinnertime caught up. He said the fishing turned out not to be so good. Drama wrote, “Well that was easy!,” in the registry, and Dinnertime put, “What? No Applebees?”. And then we headed to the road, looking for the Kennedy Meadows sign that we had seen in photos. Drama and I stopped to take pictures again, while Dinnertime kept walking. 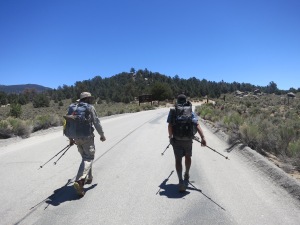 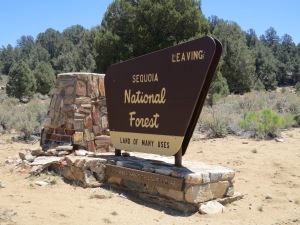 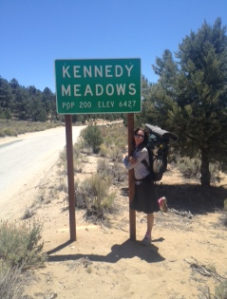 We reached a trailer park area, where hikers were lounging around. “My good man,” Drama said to Jug, who was strumming his guitar, “Can you give us directions to the General Store?” Jug advised us to drop our packs here, as this is where we would be staying, and head up to the store to get our packages. We decided that we didn’t want to part from our packs and just walked up to the store, where we found another group of hikers, eating and relaxing at the tables outside. I spotted Weeds and went over to her and got a hug. Drama got an even more excited hug from her! I headed over to the bathroom and got a look at myself in the mirror. It was not a good sight! I did my best to make myself look better, but the effort was futile. I entered the store, looked around to see what was offered, and waited in line to be helped with my packages, and also see if I could get in line for laundry. The store worker told me it didn’t look good for getting it done today! They had only one machine and a lot of hikers! After quite some time, I finally got my four packages- two that I had packed myself with my regular food and my new equipment for the Sierras, the package from Erik with the fleece jacket I had asked for, and the bear canister that I was borrowing from one of my readers, John. I was expecting to be charged $2 for each package, as was written in my guidebook, but it turned out that they were now charging $5 for every package sent! Aie!
I brought my packages out and set them by my pack and ordered a hamburger. After I finished that, I went back to order the Italian sausage and pepper special. The cook smiled. Drama commented on the amount of food I was eating, but I didn’t think it was abnormal at all! 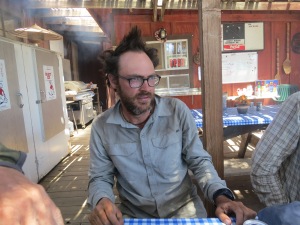 Some of the hikers were talking about what had gone on here last night. It had been a hiker’s 40th birthday, and he had bought about 40 cases of beer for everyone! A ruckus ensued with trailer doors being kicked open late at night and Team Lone Pine was asked to leave immediately.
I was very glad that I wasn’t around for that! I had seen a pint of mint chocolate ice cream in the freezer and intended to buy that later, but Wildcat grabbed it first and ate it in front of me. This was also the first time I had seen Baxter and Wildcat since Warner Springs! They were wearing jeans because they were being visited by their parents! Wildcat was so happy that she could now fit into her skinniest jeans. I went to the ice cream case and couldn’t find a second pint of the flavor I wanted so I bought the next best thing. It turned out to be not so good and by now, my stomach was hurting badly! Something was very wrong. I thought I was going to have to throw most of the pint away, but I was told that I could keep it in the ice chest for later. When we were hiking this morning, I asked Drama if he would be willing to take a picture of me holding my skirt out to demonstrate how big it had gotten on me. This would be my last day with that skirt. However, my belly was now so inflamed, that it wasn’t even worth it to try.

Drama and I took our packs and walked back to the trailers to see if we could get one. The owner, Tom, was in the main trailer with the computers and was not in the mood to help us. Apparently, a hiker had plugged his phone into the computer, which ended up causing big problems. Hikers were lying around in hammocks and I wished I could lie in one because I was in a lot of pain. One guy asked me if I was having fun. I nodded in a glassy haze. “You don’t look like you are.” I explained that my stomach was really hurting. I couldn’t really distinguish the pain from menstrual cramps, so I took some ibruprofen to see if that would help. I stood there, wondering how long it would be until I could get a place to store my things and settle down.
Finally, a different man came out with a clipboard and began calling off names of people who had signed up for a trailer. In the end, it was only Drama and I who were around and in need. We walked around the trailers, looking for ones with empty beds. “Are you two hiking together?” the man asked us. “No!” Drama quickly answered. Jeez…!
Luckily, I knew that Kim was planning on leaving today and that she had her own trailer, so I asked about that one and got it! I just had to wait until she was ready to leave. I headed back to the store and paid for the outdoor shower. I was starting to enjoy showering outside! In the collection of huge muumuus that I had looked through in the main trailer, I spotted one small dress that was actually my size! Weeds was talking on the phone and was the first to see me as I emerged from the shower. She whistled at me!

Plates of food were slowly being put out on a table and while no one was giving us any information, I think it was intended to be a potluck. Disturbingly, I had no appetite for any of it! How could it be that after walking 700 miles, the sight of food was totally unappealing to me? Weeds sat down next to me and told me that I looked gorgeous. I couldn’t believe I was in the presence of someone who would say that to me! As I sat in pain, unable to eat, I asked if there was any watermelon around. I knew that I needed to eat the seeds from one! Unfortunately, the watermelon they had yesterday was long gone. I realized that my only chance to get some watermelon with seeds was if Dr. Sole could bring some with him when he arrived the following day. I had no cell reception here, though. I walked back to the trailer with computers and after a lot of patience with the slowest internet connection I’ve ever experienced, managed to send out three messages to people from home, asking if they would be willing to call Dr. Sole, explain that I was sick with giardia, and needed a watermelon with seeds to help me get rid of it. I thought at least one of them would come through! Tejas, a super friendly girl that I had met outside the store, was standing outside the trailer, getting ready to hit the trail. When she saw me in my dress, she said, “Oh! You look so pretty- just like a woodland nymph! It’s what we all want to look like!.” She is one of the sweetest girls in the whole world! I felt so lucky to have met her.
I carried the rest of my boxes to the far end of the trailers, where mine sat, and loaded everything inside. When I opened Erik’s box to retrieve my fleece, I stood there stunned. He had bought me a neon yellow one. Did he not know me at all? I was perplexed and astounded. I really, really wanted a black one! Yellow was the absolute worst color on me! Oh, dear… I looked at some of my food, and my stomach churned. I would set that aside to deal with later and just lie down…
I could no nothing else but rest and hope for the pain in my belly to subside. 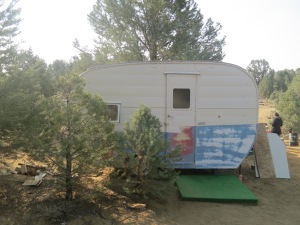