I had been debating since the planning of this hike on whether or not I should stop in Lake Isabella to resupply. It is a town that is 35 miles off the PCT and notoriously hard to hitch to. However, it supposedly has the best milkshakes on the entire PCT and it splits up an otherwise 145 mile stretch, which equals a VERY heavy pack in the desert. Once my sleeping pad blew away, the choice was made for me. I resisted turning on my phone and texting my resupply people at 4 in the morning and instead tried to relax my mind for a bit and try to rest. When it became a reasonable hour, I sent out a text explaining what had happened and asked if they could ship out another of my sleeping pads to Lake Isabella. The wind continued to blow strongly and there was no way that I could put my contacts in in those conditions. I ate a quick breakfast, looked around to see if my sleeping pad had perhaps gotten caught in a branch, stuffed my things into my pack, and moved away from that awful spot. I continued down the remaining switchbacks, bundled up in all my layers. The wind knocked me sideways. I was not in a good mood! As I descended, I found that one direction only provided a bit of respite from the wind, and I decided to stop and put in my contacts there. As soon as I rounded the corner, it picked up again. It was a long four miles!

As I approached the bottom of the hill, I saw a yellow tent. The person appeared to still be sleeping peacefully. Had I known about this spot…I read through the register comments (some people hated the wind, while others enjoyed it) and made my way toward the road.
A hiker was trying to hitch into Tehachapi without any luck and asked to borrow my phone to call for a cab. He said I could share the ride, but I had sent my resupply box to Mojave, which was 11 miles in the other direction. I walked down the highway to Willow Springs Road, set my pack down, and stuck out my thumb. One guy waved to me, but I didn’t need a wave. I needed a ride! I was so cold and had to keep moving around to generate a little body heat. It seemed that every truck that passed was a working vehicle. It wasn’t looking so good for me! I got hungry and had to dig a Snickers bar out of my pack. I tried to send out happy energy, but no one would stop! I had been waiting an hour already and wondered if I wouldn’t get my breakfast.

A car turned down the road and I waved it down. It stopped and I asked the man if he could take me to Mojave. The driver, Ted, happened to be a trail angel in Mojave and had seen me on his way to dropping off another hiker at the trail head. He assumed that I would be picked up in the meantime, but if I hadn’t, he planned on taking me in! I don’t know what I would have done if it weren’t for him! He told me about the boom in windmill construction in the last couple of years and talked about a few of the hikers he had met this year. He seemed impressed with our various backgrounds! We drove past his house and then into the town of Mojave. I told him that I had been looking forward to getting some breakfast and he said he knew just the place. He was meeting his friends at the donut shop and would take me there. I had been looking forward to an omelette, but made do with a breakfast sandwich and coffee with powdered creamer. The donut shop had enormous pastries and I stared at them, wondering how anyone could eat such a thing if it was unappealing to even a hiker appetite! I joined Ted and his friends at their table, happy for some company. 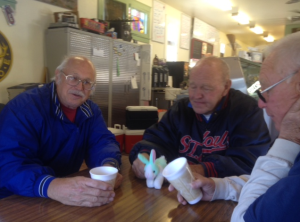 Weeds and Icebucket came in and sat at the table behind us, reading the newspaper on their zero day, which looked very relaxing!
Ted had to get going to a meeting, so I left with him and he dropped me off at the Motel 6, where I had my resupply box sent. He offered to give me an extra blue foam sleeping pad that he had at home and said he never used. Amazing!
I spent the remainder of the day washing myself and my clothes, sorting through my resupply items, walking a mile to the post office to ship extra items ahead on the trail, and then walking the mile back through the strip mall. I ran across the highway, dodging traffic, to finally get an omelette at a fastfood restaurant, and then went back later for a very bad bacon cheeseburger!
Weeds and Icebucket had told me to come find them to figure out a ride back to the trail the following morning. I found them in their room, was invited in for a beer and a chat, and called up Ted to see if he was available to take us. He had told us that he wakes up at 7:00, but agreed to meet us at 7 at the motel. Wonderful! He asked us if we would be willing to write down some information for an article in the local paper about our hikes, which, of course, we were more than happy to do! Weeds and Icebucket had put together their own hiker box of unwanted items, and I ended up taking a ziplock bag of Icebucket’s leftover grape nuts cereal that he had been carrying from the border, as well as a baggie of chocolate protein powder, and I took Weed’s city scarf that she was discarding! It was nice to hang out with them, but I had to get back to my chores.
I decided, that since I had received no care packages by this time, I would put a message on facebook, letting people know that I could sent them my resupply stop addresses if they wanted to send me a little love along my journey. To my surprise, several people responded, asking for them! It took a lot of effort to write each person back with the instructions on how and what to send. I wished I had a person at home who could organize that for me!
Finally, it was time to lie down in my bed for a few hours before an early morning wake up to talk to someone from back home. I could hear the wind roaring outside my window and was thankful to be ensconced inside.