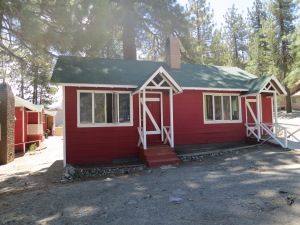 We all got up early after not sleeping well. Muk Muk and I headed to the Evergreen cafe for breakfast, while UB went to the coffee shop to work on his videos. I was surprised that there weren’t a lot of hikers in there already for breakfast! Muk Muk wanted to know what happened with my visitor, so I told her the story. She had had a bad feeling about it from what I told her in Big Bear and it turned out that she was right. She said that I should be feeling a lot more upset and angry than I was and that I should not communicate with this person anymore. She told me that I have the biggest heart of anyone on the trail and that I am also the strongest. Sometimes, I am too strong for my own good. She said that I deserve to be treated like a princess! (She could tell that I wasn’t really allowing her words to sink in…)
As we talked, hikers began to come in one by one. Cowboy walked by our table and asked if my visitor had showed up, since I hadn’t seen him since. I said he had. He asked if it was a good visit and I said no and that I would tell him about it later. “Is it short?”.
“No”.
Dinnertime came in and I told him that I did 27 miles yesterday and gave him a high five! I was the only person who had stayed at I-15 while they all started the climb from McDonald’s in the afternoon. I felt proud that I had already caught up. “And we’re Facebook friends now!” he added. I was happy for the positive distraction from my unpleasant story. 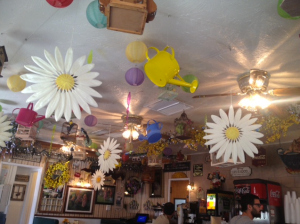 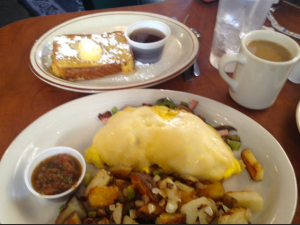 Lion King came in and ate everything remaining on our plates and then we headed out on our own way. I needed to pick up my resupply box at the hardware store (I was expecting it to be an outfitters from the name of it!) and also had to find a new pair of sunglasses, as one of the screws had come out of my pair and it was now longer functional. I ended up finding a purple-hued pair to match my outfit! It amused me that the post office had put a sticker that said “Caution- Heavy parcel- Lift carefully” on it! I saw Cowboy heading back towards the motel and called after him. I nearly got us hit by a car trying to cross the road! Paying attention to oncoming traffic is one of the things we have no need to be concerned about on the trail… Cowboy headed to the natural foods store and I headed back to the room to sort through my box and re-pack. UB was the first one to be ready and he started dancing to an Adele song. “This is how I pump myself up for hiking!” he said. Muk Muk told him he was going to make himself tired doing that!
They had taken the Acorn trail to get into Wrightwood, which is 4.5 miles long and several miles before the point at which I had gotten off the trail, so they were going to be behind me again. We all thought we could meet on top of Baden Powell to camp. Before I tried to get a ride back to the trail, I decided to grab something to eat. I went to the coffee shop and ordered a breakfast sandwich. And then who showed up, but Muk Muk and UB! I joined them outside while they pondered how they were going to get back to the Acorn Trail. Then, another hiker showed up who had been waiting to hike with them and said she had found them a ride. We said goodbye and a couple of minutes later, a man came by and asked me if I needed a ride back to the trail! I wasn’t quite ready, but took a last bite and put my pack in his truck. When he dropped me off, I asked if I could give him some gas money. He refused and gave me $10 instead! How kind! I had already had more good things happen to me on this hike than on the entire AT!
I took a moment to look out from the overview and collect myself before heading up the trail. Everyone had talked up the difficult climb we had ahead of us to Baden-Powell. At 12:42, I resumed my hike, passing Lion King and finding my own space. It felt good. The wind picked up and I found myself looking for a sheltered spot to take a short break. I wedged myself in between some pine trees, but the wind made it too uncomfortable to rest there, so I moved on. As I climbed, I passed Lullabi, and then he passed me back when I took a snack break. I was enjoying the climb and felt like I was in my element. Two older gentlemen were making their way down from the summit and as they approached me, asked, “You got this thing whipped?”. I smiled and confidently nodded. “Yup!”. He said that I have the right attitude.

I continued climbing until I reached the intersection of the PCT and the summit of Mt. Baden-Powell, which was a third of a mile off the trail. I love summits, so I dropped my pack, put on a warmer jacket, and headed up. There was a big group already sitting up there. One of them called out my name and I raised my poles in the air. I checked out the monument and the views and then asked Anastacia if she could take my picture. 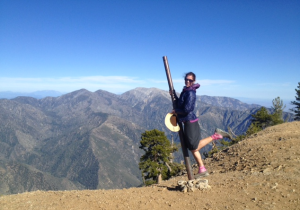 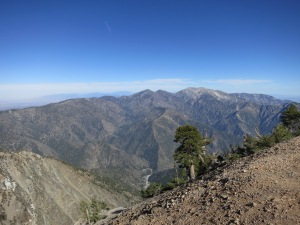 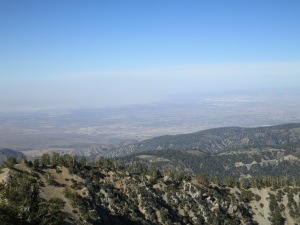 I felt like an outsider with this big group, who were all sitting in a line. 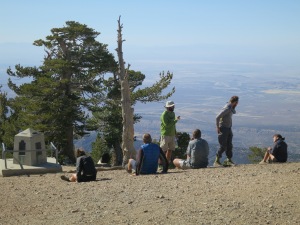 I sat at one end and listened to a few of their jokes, which I didn’t find funny. Group humor tends to dissolve into a couple of subjects which don’t interest me. It was far too windy to camp up there and the next obvious place to camp and get water was Little Jimmy Springs, which was six miles away. The group planned on heading there and didn’t seem concerned about the time. It was now 5:05 and I found the thought of hiking six miles before the sun set to be stressful! I was the first one to get going. After a mile and a third, I got hungry and needed a snack break. Cowboy and Birdman passed me while I was eating a powerbar. I moved on, trying to keep a strong pace as I climbed. My breathing was loud. I saw that Birdman and Cowboy had stopped to admire the view. They said they liked to look back and see where they had come from, as do I. Cowboy pointed out the direction and I said I thought we had come from that way. He joked about not really knowing and to pay no attention to them. We moved on, and I was happy that I could keep up. As I walked along a ridge behind Birdman, I thought about how lucky I was to be out here doing this. 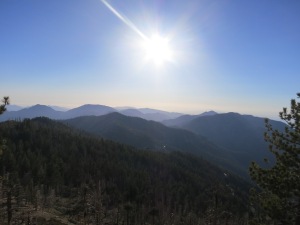 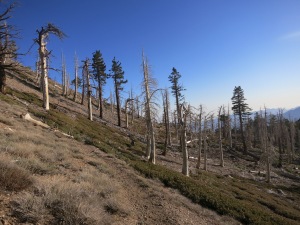 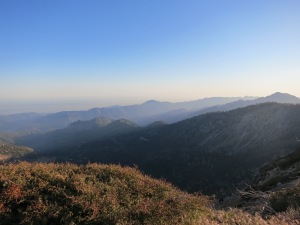 Cowboy fell behind and Bambi joined our little group. We heard Lullabi playing his flute in the far distance. Once we reached the top of the climb, Birdman stopped to observe some birds with his binoculars. Bambi took the lead ahead of me. I asked him how he got his name and he told me it was because of his very lightweight shoes and the ability to spring over obstacles in his path with them. We reached a confusing intersection and wondered which way to go. I thought it was the higher path, but Bambi wasn’t sure. He was examining his map when Birdman and Cowboy reached us. They joined in on the map reading and the consensus was the lower path! I lead the way. There was a big fallen tree on the trail, which was difficult to get over gracefully. We reached a side trail later on and wondered if that was the spring. I started down it, but the others continued along the main path, so I backtracked and followed them. We came to a camping area as darkness descended. There were a mixture of thru-hikers and locals camping within a large area. I spotted Dinnertime’s tent and he made his owl call to me. I went over to join him at the picnic table where he was having dinner. It was already after 7:30. The others stayed back at another area. I cooked some pasta and shared some of my Starbursts with Dinnertime. Another hiker was also eating there and had taken out box after box of individual pies that he had bought in Wrightwood and stacked them up right in front of me. I wish he hadn’t!
I didn’t feel like setting up my tent at such a late hour, so I laid out my ground cloth to cowboy camp. This area was notorious for bear activity, but I wasn’t concerned.
“The Kid”, who was camping nearby told me to yell if a bear came over to me. He said he had his phone on airplane mode and was ready to take video of it!