I got up to pee in the middle of the night and spent a moment taking in the environment I had somehow found myself in. The whole scene was surreal! Where was I and what was I doing out there? All night long, the wind kicked up the dirt, blowing it all over us. I awoke to a layer of dirt coating my sleeping bag, as well as my face! Oh my goodness!! I said a cheery “Good Morning!” to my friend and it was returned with silence. (!!) He went over to talk to Birches and avoid me. While that was not cool of him, I didn’t mind having a bit of personal space to clean up. Dinnertime woke up and began cursing the dirt that had blown into his tent. “Can’t I have at least one enjoyable day out here?!” he yelled out. I was amused that he was more troubled by the dirt than I was! I told him that he was the one who chose to be out here!

After everyone had packed up, we headed back to the road. I walked ahead of everyone on my own. It was the second time I had walked this stretch. Dinnertime needed to get into town to resupply and the others wanted breakfast. It’s hard to turn down an opportunity for a real breakfast! Our friend was already talking about hitching back to his car after today’s hike, which was surprising to me. He had planned to hike for two days and now no longer wanted to do that. His mood was upsetting. But the other two were laid-back and nice to be around and I enjoyed eating with them. Time seemed to stop regarding the constant pressure of miles and moving forward with this unplanned stop. We each paid for our own food and then went to a grocery store so Dinnertime could pick up what he needed. And then we drove back to the parking lot where Birches’ friends would be coming to pick him up. After a lot of waiting, we finally headed back to the trail! Dinnertime somehow dropped back and I lead my “friend”, chatting a good part of the way. I was not used to hiking with anyone and I worried about not being in a good mood in the heat, and about my constant need to take off my backpack (which he agreed was annoying), but I was perfectly pleasant! It turns out that my companion was the grumpy one. He asked if he could use my sun umbrella. I was glad someone could make use of it after carrying it all that way! We came upon some trail magic after a road crossing that included a big container of water with a pump. However, I couldn’t get the pump to work! My friend offered no help and when I asked if he could help me, told me that I went to MIT and could figure it out for myself!! Luckily, Dinnertime caught up and graciously helped me out. (There was something very wrong with this picture!!).

We moved along and later came to a second cooler with some water and fruit on it! Wow! A day of trail magic! My friend sat on the cooler, taking up the entire width, as he read through the registry. I looked around for a place to sit, but couldn’t find one. Instead, I did something really nice for him, and he completely ignored me! Wow! Again, Dinnertime caught up and said we had just missed sandwiches! Apparently, a couple had come by to do trail magic, just as we had started up the hill, and wondered if they should run after us. They made Dinnertime a sandwich.
My friend and I moved on. This time, he took the lead, but did no talking. So, we were both quiet. The day was growing hotter and the temperature was now in the upper 90s. The trail took us around Silverwood Lake, which was incredibly beautiful and a surprising sight for being in the desert! I kept wanting to take pictures! By this time, I was having painful chafing issues, but decided I could make it to our destination and then take care of it. My friend kept saying that we were very close, but I checked my GPS and told him we actually had three more miles. 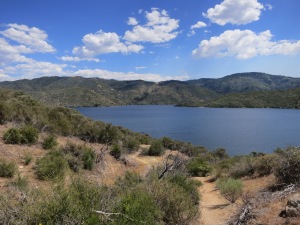 Finally, we made it down to the Pavillion and bathrooms. I thought we could hang out by the water, but he said he was going to walk to the road and try to hitch back to get his car. Really? Why now? Why did he need to do this right at this moment and even today for that matter? I suggested he ask for a ride from someone in the parking lot, but he was determined to walk to the road and hitch.
I was left alone with a bad feeling permeating the air. Dinnertime came down the hill and said he had run into UB, who had just gotten back on the trail, and asked if he had seen me. He said he hadn’t but that I was “a hell’a cool girl!”. (Thanks, UB!)
Dinnertime and I separately made our way over to the water. Lots of locals were hanging out there. I went in partway and then tried to dry off while lying on my sleeping pad (not very successfully). A few other hikers rolled in and we each claimed our own spot on the grass.
I headed back to the Pavillion and cooked some dinner, although I didn’t have an appetite. My friend returned, even more grumpy because he had a hard time hitching. He said he was going to go for a swim. I asked if I could at least have a hug. This whole day had been upsetting. More and more hikers gathered at the pavillion. I was not at all in the mood to socialize, so I took my things over to a picnic table that would act as my bed. There was a bit of reception at this place, so I texted a friend and asked if he could talk. He finally made a bit of time for me and I got to tell someone what was going on. He told me to stay away from this guy. He didn’t have much time to listen to me, so the call ended very abruptly and I returned to not feeling so well. Then, the “friend” put his sleeping pad on the other table in this section. He still didn’t have anything to say to me. I tried to ignore his presence, wondering if I should just move somewhere else. But I have a hard time not wanting to resolve things. I went over to him and said a few things I needed to say, and while he didn’t have much to say back, at least he heard some of those things.
I went back to my picnic table, got into my sleeping bag, and closed my eyes.