I got up around 5:20 in the morning and discovered I was half off my sleeping pad. It was cold! Condensation was all over the inside of my tent and there was even frost on my backpack! 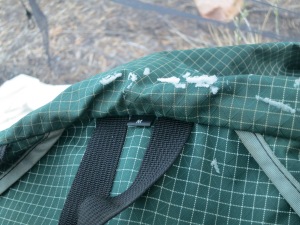 I had granola with powdered milk for breakfast and was on the trail at 6:26. I wound my way down some switchbacks, passing by two tents and a cowboy camper. A couple of miles later, I found the Swedish boys, still in camp! They had stopped at 4:30 yesterday and camped with a big group. As I was chatting with them, a hiker came up to me and said, “I need to talk with you- privately.” I said that I knew, as part of the plan to meet up with the AT hiker was to surprise Dinnertime’s friend who happened to be joining Dinnertime on this stretch of the PCT. The three of them had hiked a big stretch of the AT together. Robin listened as I asked where they were planning on getting to today and tomorrow. The entire time I was talking to him, I somehow thought he was Dinnertime’s friend because I had only seen Dinnertime one time and this guy didn’t look like him. At one point, I asked him, “Who are you?”. He said “Dinnertime” and took off his hat so I could recognize him the way I had met him the day coming into Ziggy and the Bear. He told me that his friend Birches (who we could hear crushing some kind of metal in the distance) was camped a little ahead and that I should say hi and tell him that I also hiked the AT the year they did. “But then he might catch on!” I said.
Everything turned out fine. Before I left, the Swedes warned me about getting lost at Cougar’s Crest. “What’s that?” I asked.
Sure enough, I spend a good deal of time around that intersection trying to find the PCT…
The guy with the funny hat who saw me in the gear shop in Idyllwild and two others passed me while I was snacking on a rock, but I never saw Dinnertime.
As I approached the creek, I was really hoping that no one would be there so I could take care of my girl issues, but the Swedes were taking an extended break there. 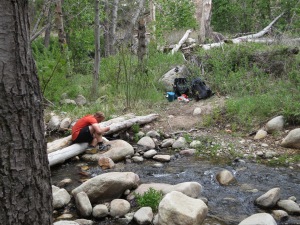 Within a couple of minutes, I was perfectly okay with the situation. How could anyone be upset around them? A couple more people came by to fish, as well. I thought I saw some poison oak and asked Rasmus about it, but he said he didn’t know what it looked like either! I filtered some water and then relaxed for a few minutes before heading on. The Swedes wanted to hike six more miles to Splinter’s Cabin, but I was shooting for 8 more. 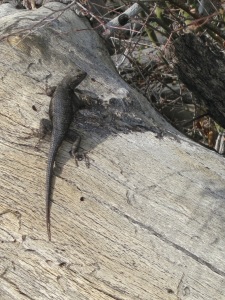 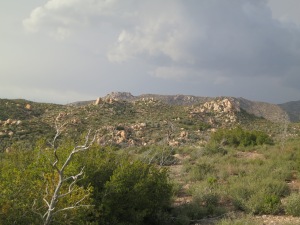 At the last second, they overtook me on the bridge.

They are fast hikers! A guy on his way out said there was a big group over there. It was off the trail, but I decided I could go over and cook my dinner there and then move on a bit. Cowboy was there and said it was nice to see me! I said thanks. I asked him if he did yoga today and he said he had done some in the morning, but that he didn’t have a set routine. I told him I wanted to do some with him sometime!

I ate dinner with the Swedes, who went down to the creek to do some fishing afterwards. People started jockeying for positions to sleep on the concrete floor under the roof. I packed up and got going after 7. Thunder and dark clouds rolled in and I wondered if I had made a mistake leaving the roof!

As it started to rain, I switched jackets and put my pack cover on. I was walking on a ridge with little possibility of camp spots, but then I found a little path to the right and decided to check it out. There, I found a flat camp spot and was able to set my tent up easily! The rain stopped at 8:45 but started up again several times throughout the night. 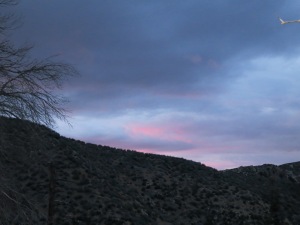 Tomorrow we would reach Deep Creek Hot Springs. I was a bit wary about this place from what I had read in the guidebooks. I had 15.6 miles of hiking until I met my visitor.