Check out time was (unfortunately) at 10am. I had to get up a lot earlier than I wished because of this fact. No rest for the weary! I walked to the other end of town for breakfast, which turned out to be very disappointing. It was a very simple and plain meal of scrambled eggs, thin, crisp bacon, and toast. (On the bright side, I knew that I wasn’t missing anything by not taking a zero here!). I had read an inspiring quote on facebook while in my room that I thought would help Chad, but couldn’t figure out to copy it electronically, so I hand-wrote it, and then typed it back to him and sent him a picture of Hope Pass with it, as I sat in the booth.
Then, I walked back to my room and started packing! I didn’t even have time to take a shower! I had hand washed some of my clothes yesterday and hung them up to dry, but they were still wet! I moved everything out of my room and over to a little grassy area with a picnic table across the street and spread all of my wet clothes over the table to dry in the sun! Ah, the life of a hobo! 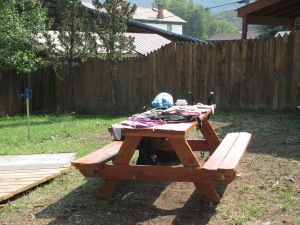 I tried to empty the gas canister that I was still carrying from Denver! But, it wasn’t emptying quickly enough, so I decided I might as well keep it with me. (The guy at REI in Denver told me it would last probably 4 or 5 meals!). I had left the canister I bought in Leadville at the hostel in Salida. When my clothes were close to dry, I packed everything up and headed to the outdoor lunch place, where I got another turkey sandwich and raspberry bar to go. I checked my e-mail and was surprised to see one from my “friend.” He communicates almost exclusively by text, so I wondered why he had e-mailed me. He informed me that he had not left anything for me while he was in Durango, both for “personal” and other reasons… I initially felt disappointed, but realized I was long past wanting to get to Durango to find a surprise. The idea had helped me get the activation energy of the hike going, but the hike had fed itself once I started. Now I would just be happy to reach Durango as the ending mark of the journey itself. 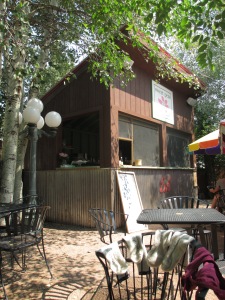 The wife from the Raven’s Rest hostel and her small children came in to have lunch, as well. She was really pretty, seemed very nice, and was very thin! I kind of wished I had stayed with them. I would have had the place to myself, I think, and for the same price of my ride back to the trail from the lady in town, I could have both spent the night and gotten a ride back to the trail if I stayed with them… Oh, well. I was still trying to dry my socks and sports bra. There was a public bathroom along the central lawn in town, so I headed over there to get changed for hiking. I had just enough time to stop at the coffee shop for a latte to go. Luckily, they took a credit card because my ride was going to cost $25 and I had $26 in cash! The woman was waiting with her car trunk open when I stepped outside. She was very nice and helped me put my things in the car. She was a single mother of an 18 year old son, headed off to college. She talked about other hikers she had given rides to and blogs. As she dropped me off, she said that I could call her if I needed help further up the trail. There wasn’t any shade in the parking area, but there were a few picnic tables, some scattered small evergreen trees, and lots of downed trees from the beetle destruction. I sat at one of the tables and enjoyed my latte and raspberry bar, perfectly content. Life was good!
At 1:30, I started up the trail. It was gentle, easy walking to begin with. My pack didn’t even feel heavy and I felt like I had plenty of time. The views weren’t the best, but I could see San Luis peak behind me. 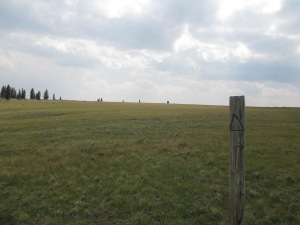 I walked through another exposed tundra region without any weather problems, which was surprising for the afternoon! 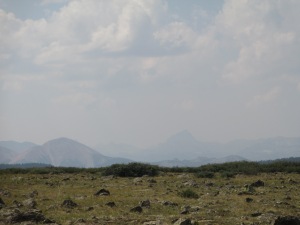 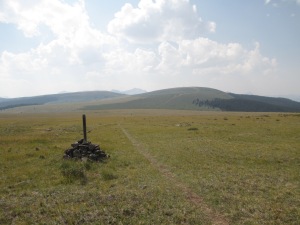 My guidebook said there was a camping site at an intersection ahead, but I saw nothing! It was all exposed! I continued on, climbing up a hill. I took a break under a little tree and kept going. I saw beautiful beams of sunlight streaming down through the clouds and marveled at the sight! I had seen rain streaming down from that a distance several times before, but never sunlight! I took a lot of pictures.

I was thinking about my friend (and first yoga teacher), Checka, a lot in this area. She had talked about wanting to thru-hike the Appalachian Trail, but I wasn’t sure if she would enjoy the demands of high mileage days (even though she is perfectly capable of doing them).
I saw several possible camp spots once in the forest again. I wanted to get as far as possible, though, so I walked through a meadow and to the edge of the forest on the other side.

I looked to my right and saw a campsite! Perfect! I put on all of my layers and set up my tent. I then went to sit on the logs with my food bag. I felt lonely, sitting there, though! What good is it sitting around a campfire setting with no one to share it with? I decided that I wasn’t so hungry and went to lie down in my sleeping bag. I felt really tired. I snacked and napped, then stepped out before it was too dark to brush my teeth and pee. Then, I conked out! (An animal walked by my tent in the night).