I didn’t sleep well again… This time, I made sure to have my head at the top of the slope, but the bigger slant was in the left to right direction, and my sleeping bag kept shifting to that side. My sleeping pad had balled up underneath me again. It was totally useless. And my mind continued to be disturbed by that “friend’s” words from home. It took me two days to fully understand what I already knew to begin with- that a person’s anger always stems from their own behavior and inability to make changes within themselves. The anger that he was projecting on to me was simply a misdirection for what he didn’t like about himself. This has been a long-standing pattern in my life. People who display unhealthy habits are drawn to me and then tear me apart for being who I am. I now understand that I can’t allow these people into my life. It’s so hard for me to give up on people though, especially when I think I can help them.

The chatterings of a squirrel woke me up at 5:45. My period did in fact come (and I was grateful that it waited until I was out of the treeless and waterless section). I ate some granola and a poptart, packed up, and headed out at 6:50. The first three miles passed quickly. My food bag was noticeably lighter. And I found a heart in the middle of the trail that someone had made with rocks! (I imagined that someone ahead had left it for me and was curious about who that person was).

I crossed Buffalo Creek, put on some sunscreen, and then started a climb. And after eating a power bar by a stream at mile 11.9 in this section, I was finished section 3 by 10am! (The Colorado Trail is divided into 28 segments of different lengths, split by trailheads where the trail can be accessed. Many people hike it section by section). A third of a mile into section 4, I headed towards some campers lounging in camp chairs. When a thru-hiker comes across a scene like this, the first thing that comes into our minds is trail magic! But these people didn’t even say hi to me, much less offer me any food or drink. And two barking dogs started running directly at me! I made my way around them and turned back onto the trail, thankful to be alone again. I was starting to feel tired and my spirits were dragging a bit. I found an embankment covered with pine needles and sat down for a rest. I turned on my iphone and was greatly surprised to find that I had reception! I didn’t have any texts or voicemails, but reading facebook updates and having a connection to people I knew from home gave me a little morale boost. I left a voicemail with Laura, letting her know how I was doing, texted my friend in Switzerland, sent Erik an e-mail, and resumed walking.

It began to rain around 11:25, but I decided not to put on my rain jacket. It only lasted 20 minutes. Just after noon, after hiking 4.6 miles into the segment, I found a place with the nicest running water yet to stop and have lunch. It was in the woods and the bugs were out, so I had to apply repellent first. My mood was finally beginning to improve! I snacked, put on sunscreen, filtered water, and looked at my guidebook pages, and then headed back out at 1pm. I climbed and climbed up the next section. At first, it reminded me of the beginning of the trail up Mount Washington, and then turned into forest. As I took my pack off for a break, I saw a female hiker headed towards me. I told her she was the first person I had seen all day. (I was the third person she had seen. Apparently, there were 2 men ahead of me). She was hiking the trail the opposite way I was, and I congratulated her on her near finish. We asked each other about the water availability ahead of us, and continued on.

Around 2:45, it began to rain again. I eventually put my rain jacket on, hopped over a tree, and continued on through a large meadow, dotted with yellow flowers. I finally felt like I was in Colorado! (I had known since I was in college that Colorado was a place I had wanted to go, but this was my first time I had actually made it out here!). 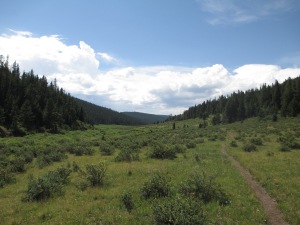 I walked over a mile in the rain, and then started to get tired again. I also had to pee. I found a couple of large trees with dry pine needles underneath, so I put my pack down and took a break there. I looked out in the direction I would be going and saw the rain coming down. And then, I looked back towards where I had just come from, and saw no rain in the air! I was standing right on the rain line! Incredible! I left the protection of the tree and continued through the meadow. Looking up towards my right, I saw a man setting up camp, but he did not see me. The rain had stopped and it was now hot out. I felt tired and found a nice flat rock to eat a power bar on. I decided to lie back on the rock and rest for awhile (something I rarely give myself permission to do). The sun was bright and I needed to shade my eyes with my hands. Within a couple of minutes, clouds began to move across the sky. More and more clouds moved in, filling up the sky, and the temperature immediately got cooler. A storm was coming and I needed to find a place to set up my tent! Thunder began to rumble. Most of the area was covered with thick plants and rocks and my eyes scanned the landscape for a flat area. I was also looking for a place where I could collect water. I found a small, exposed clearing on the side of the trail, but decided to press on. To my right, up a slope, I saw a stand of pine trees and decided I could camp underneath them. So I veered off the trail, headed for the trees, and dug my tent out of my pack. I had a hard time staking the tent because the ground was so hard! I looked around for some rocks that I could use to pound in the stakes and came across a campfire ring and the skeleton of a large animal! This was an actual campsite that I had found! By 4:30, I managed to get everything inside my tent and I stayed there for the next 2 hours, as the storm came in. At first, there was sprinkling rain and lightening in the distance. Then the wind picked up and the thunder grew louder. The temperature dropped from 80 degrees to 70 to 50! I put on my fleece pull-over and my rain clothes and got into my sleeping bag, fading in and out of sleep while lightening flashed all around me! I was weathering my first Colorado storm! Eventually, it passed, and I emerged from my tent to cook some mac and cheese. I added salmon for more protein, but the whole meal was cold and disgusting! The processed cheese remained hard and clumpy, and I just couldn’t stomach the taste. As I crawled into my sleeping bag for the night, I realized that I had hiked 50 miles of the trail so far- already 10% of it! 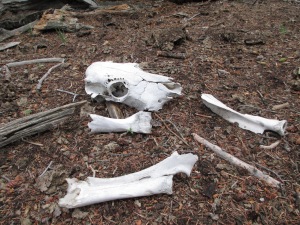